The idea to walk the Yorkshire 3 Peaks was set against the context of having walked The National 3 Peaks in 2016 and done the London to Brighton walk a couple of times (well, 3 times in the case of Andy). Oh, and there’s The Shipwright’s Way, which was memorable for all the wrong reasons, but that’s a whole other story that doesn’t need to be told…

We wanted a challenge, but not one where toenail loss would be in double digits, and where we’d be hobbling in a lot of pain and suffering for days to follow. I was due to start a new job the day after the event, and didn’t want to turn up wrecked, and asleep. Not a great look. We’d looked at a few options, including the “24 in 24” in the Lake District, but if I’m honest, neither of us was going to be committing to the sort of training required for that. Or, as it turns out in Andy’s case, any hill-walking training! Arriving into Yorkshire, which is my second spiritual home (the other is Melbourne) the distant hills started to take shape, and grow. And grow. And grow a little more. In our minds, having completed the National 3 Peaks, the Yorkshire 3 Peaks (Y3P) would be large hills, and wouldn’t trouble us. Hmmm. We checked-in to our frankly amazing AirBnB in Ingleton, spread out the map on the dining table, and had an uncharacteristically (for us) adult and considered discussion about the merits of anti-clockwise versus clockwise. We wanted to carry as little as possible in the way of food, and to have a “bail point” option if we needed it. I’d been suffering badly with long-covid, and there was a real prospect that I wouldn’t complete the circuit. Anti-clockwise brought the café at Horton-in-Ribblesdale into play at about the 3 hour mark, and the Station Inn at Ribblehead would be a drink-stop, or our bail point. Anti-clock it was.

06:15 saw us parked at Chapel-le-Dale and heading down the road towards the path for Ingleborough. The navigation was initially taken care of by All-Trails, before we got meshed with the conker of people doing the challenge in groups on a guided basis. We’re not super fast or super fit, but we soon found ourselves overhauling groups of walkers. The walking was easy, following a largely paved path across boggy ground, until we hit “the wall”. Here, progress was much harder going, but 15 minutes or so saw us on the summit at 07:30. The temperature on the summit plummeted as we came out of the lee of the mountain, and the visibility was about 20 feet at best. We took quick snaps, and then joined the huge numbers of excitable group walkers as we made our way down in the general direction of Pen-y-Ghent in slow motion. (My eyes look like pissholes in the snow in the pic below. It’s hay fever and an early start!) 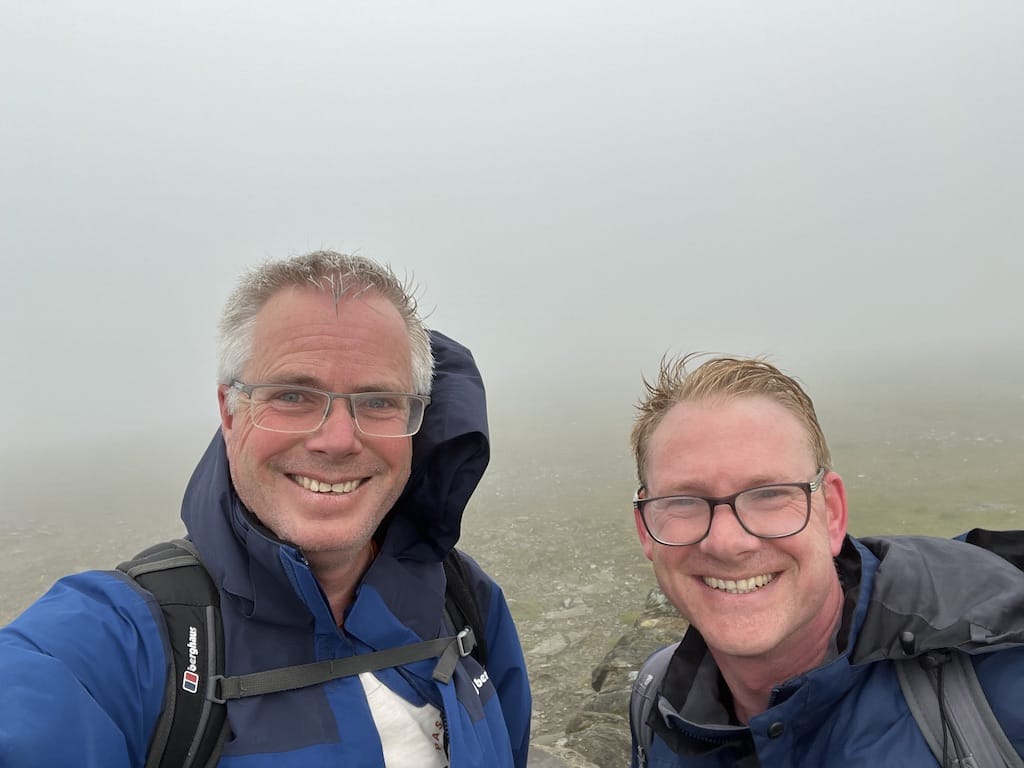 We quickly overtook the groups, so that we were in relatively clear air, and headed towards Pen-y-Ghent on an easy to follow and easy to walk route.

The cafe at Horton-in-Ribblesdale was shut, and had been shut for a couple of years – so no cheeky coffee and cake to sustain us up Pen-y-Ghent. The ascent of Pen-y-Ghent was a bit of a slog, and the wind was gaining strength as we climbed. As we neared the summit, the path basically disappeared, being replaced by a rock scramble. It was one of those times when you think to yourself “I can’t go back, and I don’t want to go forwards.” With the wind whipping around us at about 30mph, a mistake could have been very costly. (Read “death”).

We summited at 10:30, took some pics, and huddled behind the wall to have some food and drink while not on the move. The wind was really anti-social now, and so we stayed for only a few minutes, before making our way down.

A hundred or so metres off the top, we saw someone that we recognised from the car park, and we couldn’t believe it. We did the maths. If we were “crossing” at the 4 hour mark, would we complete the walk in 8 hours??? We were elated and confused in equal measure, and when we then spoke with someone we’d spoken to at the very start of the day, our belief in an 8 hour walk rose again. We grinned at the potential ease of the walk, and started basically jogging and whistling. 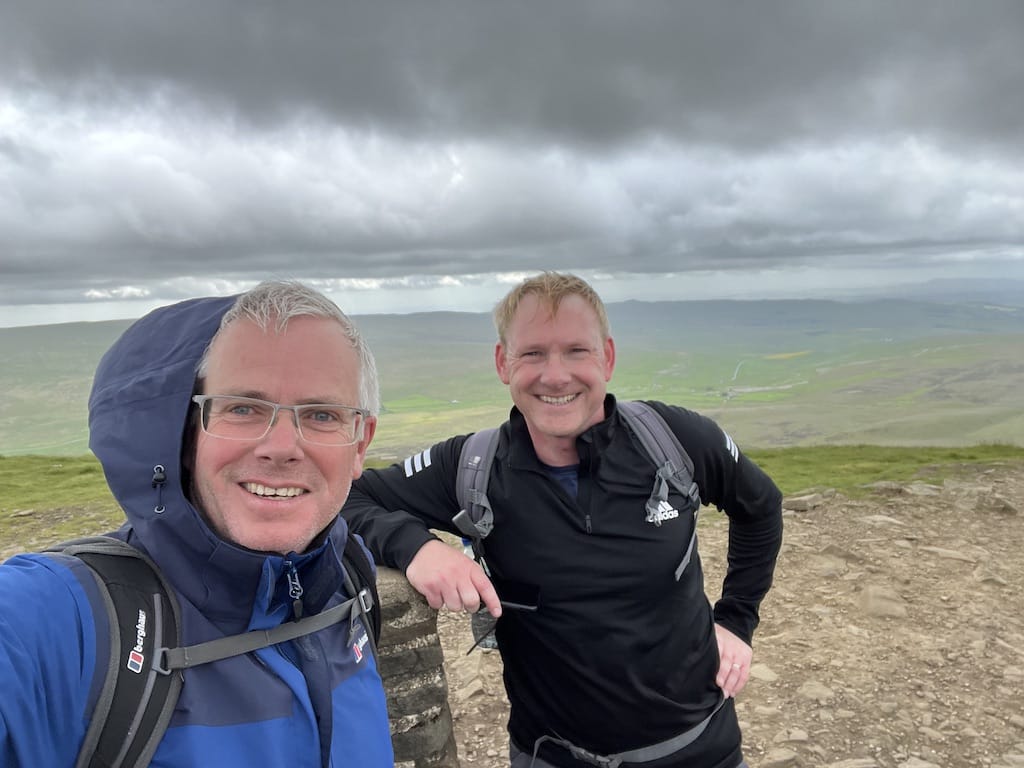 The walk to Whernside was a long schlep, and it was a long-way distant, but our spirits were high. We stopped just before the Ribblehead Viaduct for a bite to eat. At this point, I entered familiar “mind” territory. Rather than relishing the walk for what it was, kicking back in the sun, and recharging my batteries for a bit, I fidgeted while Andy tended to his feet and had some grub. We saddled up for the final leg of the walk, and having decided to follow the main route, and not try a much shorter, much steeper route, we yomped the remaining miles to the summit.

As we walked, I walked faster, wanting it done. Then Andy walked faster in response, to the point that we were basically grinding it out at speed. I had a word with myself, and forced myself to stop, look, embrace the view, and take some memories of the vista away with me. It’s a beautiful landscape more than it is stunning, but certainly worthy of a few moments of contemplative enjoyment.

As we reached the Whernside spine, the wind notched it up another gear to the point that conversation was more or less impossible, and there was no joy in dawdling. We got to the trig point at dot on 3pm, took the obligatory pics, and hunkered briefly behind a wall. Andy rang Sally, and I pissed all over my legs – though not at the same time. I don’t know Sally well enough for that type of caper.

The descent towards Chapel-le-Dale was a series of stone steps that made for mentally tiring walking on tired legs.

We formulated business plans for having a golf buggy taxis at this point in the walk, and mentally engineered the You-Poo – a companion product to the SheWee. (The SheWee company is based in Ingleton, and so it seemed natural to plan this as our next business together. It’s not massively scientific in its concept – little more than crapping in a bag, and carrying it around with you afterwards. I don’t think we’ll be millionaires).

We rolled into the car park at 4:15, and before anyone could notice that we weren’t part of an organised group, and had no place being parked there, scarpered.

10 hours pretty much to the minute to get round, which as an achievement was gratifying. 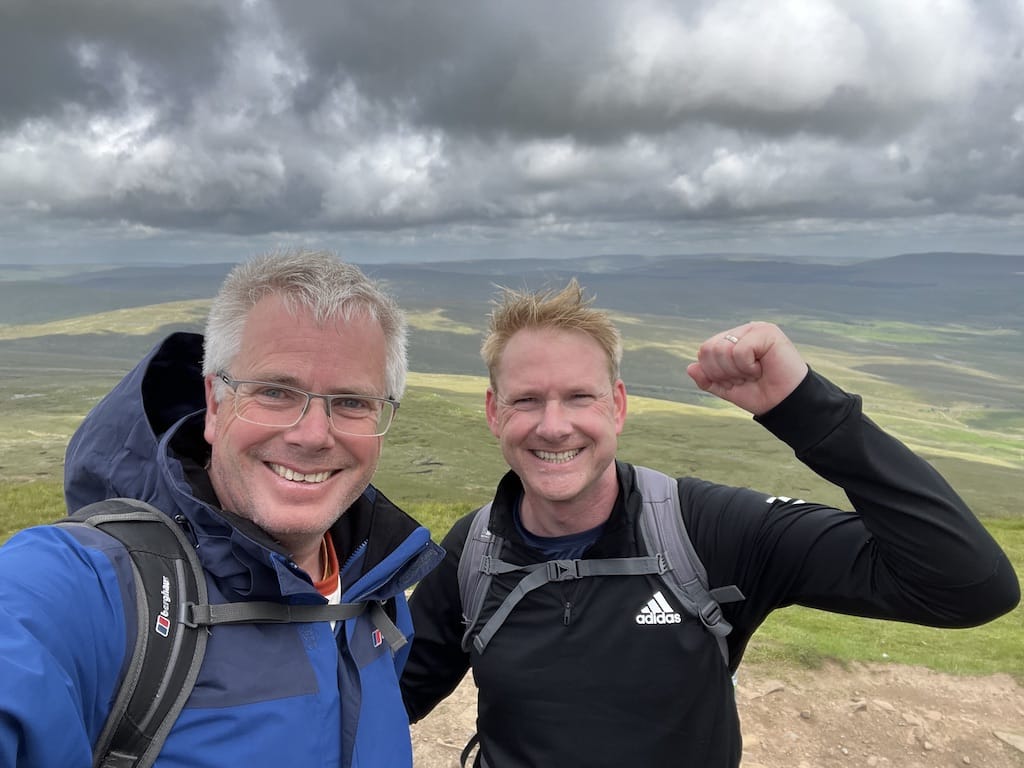 It’s the first challenge of any duration that I’ve really enjoyed, and would love to do again. The distance is far, but not too far. The way-marking is reassuring in clear weather. The views are lovely. The mountains are high enough to be challenging, but not technically demanding.

Enjoy the event. Don’t simply focus on getting it done.

Walk with Andy. The conversation is never boring. Or politically correct (C6).

Next stop – English 3 Peaks in a day. 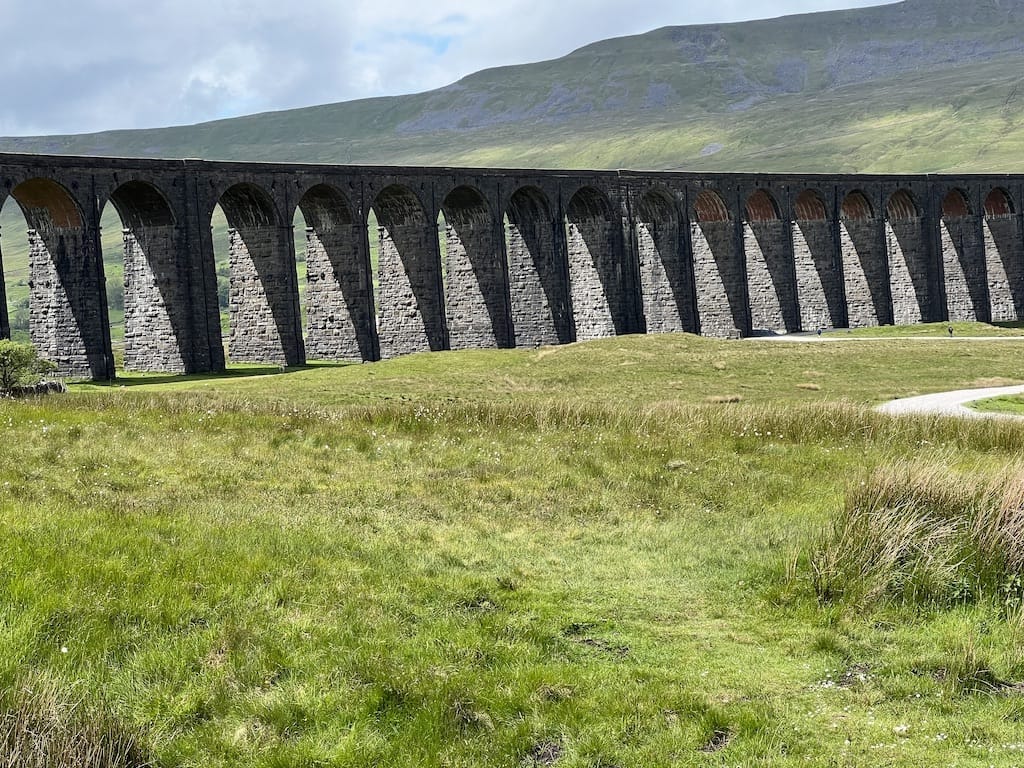