London to Brighton Trek – The Walk

The big day had arrived. At 7:30 we arrived at Kempton racecourse in fantastic weather, excited by what lay ahead of us.

The L2B Trek itself

We all checked in, got our foot care kits and chatted while waiting for the event to begin. After a short briefing, we hustled over to the start line, keen to be in the first group of 100 to set-off.

At 08:00, a claxon heralded the start of the trek, and a long line of walkers started wending its way from the racecourse, through Sunbury, Walton on Thames and onto the Thames footpath. The weather was warm, we were pleased to have finally started, and the walking was easy. The first water stop and check-point at 15Km came around surprisingly quickly, though this was already nearly 3 hours into the walk. It’s odd how all of a sudden a 3 hour walk seemed short! A quick 15 minutes for a drink and a change of socks, and we were off again. 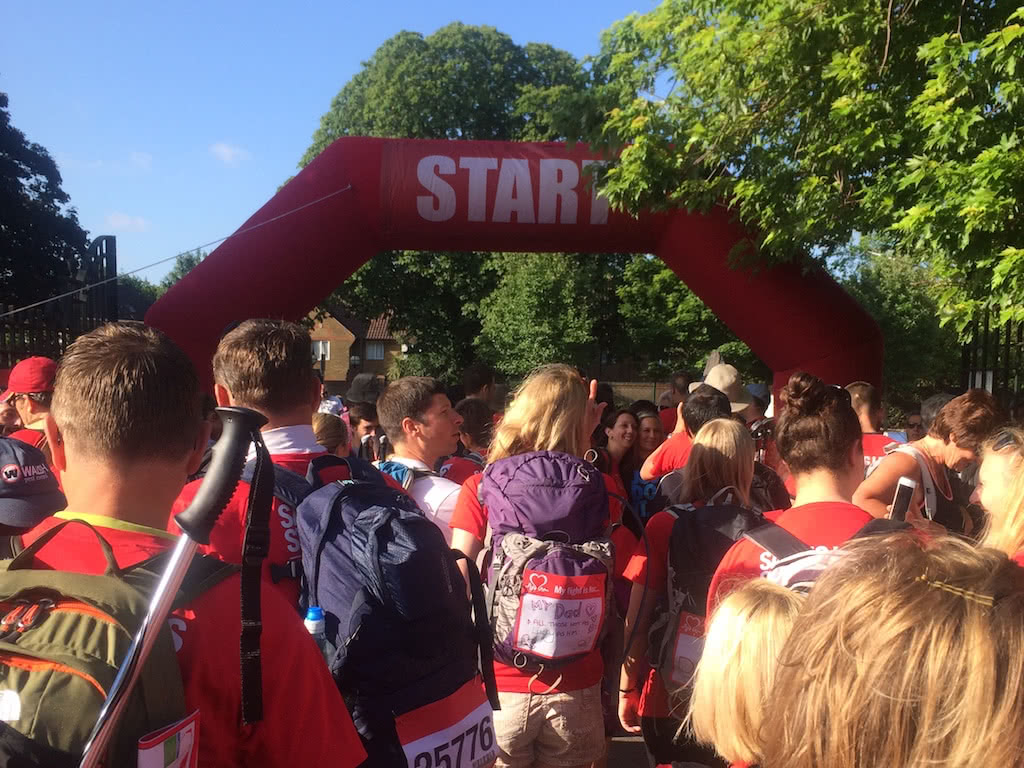 The 18Km to the next stop was along the River Wey through beautiful countryside in what was now pretty warm weather, with the temperature hitting the mid 20s. We could hear, and at times see, the Armed Forces Day that was taking place in Guildford, with a Sea King helicopter circling around. We chatted, joked and made our way along. I was surprised that by the time we got to Guildford I was feeling pretty tired, and my right hip was not enjoying the distance. Having previously done a 50Km walk, I expected to get to 50Km without incident, but on reflection, I was seriously tired by the end of that training walk, and hadn’t done much since.

Hot, dusty and already flagging, we rolled into Guildford and had lunch and ice creams. We were still a team, but differences in walking speeds started to emerge, with Andy and I maintaining our pace, while slowly pulling ahead of DC and Tim. By the time we arrived at the checkpoint in Bramley, we’d split into two pairs, but not intentionally so. We really wanted to finish the walk as a group.

Then there were two

We arrived into Cranleigh in the early evening, and once more set about tending to our feet and having a bite to eat. DC and Tim arrived, and made their way to the medics. They were advised that the combination of foot blistering and other muscular issues meant continuing was highly inadvisable, and with very heavy hearts, withdrew from the event.

Andy and I pushed on from Surrey into Sussex, and to Christ’s Hospital where we had arranged to meet my wife, who had some food and drink treats as well as warmer clothes for the night walking. We set off again, and less than 400m up the road, I had my first foot injury, and made my first mistake. I could feel a toenail lifting off, and pulling against the top of the boot. I stopped, quickly taped it up, and we pushed on, figuring I’d get to the next checkpoint and “do it properly there”. I’d unpacked my bag in a hurry, dropping my socks in long cut grass. As I walked off, I could feel there was something in my boot, but decided I’d sort it out later. Big mistake.

We got to Southwater at the 60Km mark, tired and now blistering. We both got patched up, and struggled massively to get any food down us. Looking bleakly across the table at one-another, the remaining 40Km+ looked like a long way, and we’d now been walking in the full darkness for about an hour. The combination of the transition to night, early stage blisters, a lack of desire to eat and knowing that 8+ hours lay ahead of us was mentally tough.

After Southwater, we cracked open our Jack Daniels & Coke. The difference this made is hard to describe. The sugar. The taste of the bourbon. The caffeine. The sense of “normality”. The first can quickly gave way to the second, and we found ourselves excitedly wondering if we could find a late night petrol station that might sell us some beers!

We pushed on into the tree-lined darkness, with no-one ahead of us, and nobody behind us. There were no reference points, and with growing mental and physical tiredness, it became an increasingly mechanical slog. At the 75Km mark, we arrived at the Cat & Canary checkpoint in Henfield. We sat in the bar, dazed and feeling shell-shocked. A paramedic was getting a coffee, and having given us one look, seemingly made it his mission to sort me out, while another walker offered us energy tabs. I took my right boot off, and recoiled at the thumb-sized blister on my right foot, which I had no idea was there. I made my way outside with this Geordie medical angel, while Andy focussed on not being sick.

With even less enthusiasm, but now utterly gritted determination, we forced our reluctant bodies and minds to set off once more into the dark. I tried to listen to music, but even the simplest task of disentangling my earphones and sorting out the wires was beyond my now befuddled brain, so I settled for the sounds around me. The period from 75Km to 85Km was, in summary, hideous.

It was an exercise in survival, and I resorted to counting my strides, 10 down to zero, 20 down to zero and got as high as counting 120 down to zero. The terrain was gently undulating over a variety of surfaces, including chalk and flint, which was tough going on our feet and ankles, and we were acutely aware that a turned ankle would most likely spell the end of the trek.

Somehow, and don’t ask me how, we arrived at Checkpoint 8 and the foot of the South Downs. We knew that there was a climb ahead of us, and in the 3:30am gloom we could see the top of the hill, but it looked nothing like as difficult as we expected. I followed Andy up the slope, with hope in my heart, and confidence that we’d easily make the finish by 8am. I was pre-occupied by how early I could wake my wife, as if we finished at 6:30am which it looked like we would, I’d need to ring her at 5am.

We summited the hill, and my heart sank to my boots. Rather than seeing the sea, we were facing a long, deep down-slope, and a longer and higher climb than we’d just done. We doubled our resolve, gritted our teeth and ploughed on. We finally reached the next summit, and had the self-same experience, except that we could now see 2 dips and 2 further hills.

This was my mental low point. We were about 87Km in. We’d been travelling for 20 hours. We had about 16Km left to go, which at normal pace would be about 3 hours. It was now gone 4:30am, and progress was slow and painful. I could easily have broken down, and had to shout out loud at myself.

Quitting was no option, and continuing was several more hours of pain. To put it in context, we had the length of 2 football matches still ahead of us.

I don’t know how, but we got to the 90Km marker, which signalled the end of climbing, and a long gradual descent into Hove. At this point, something happened in Andy’s boot, and so far as I could tell, he was on the point of passing out from pain. It was written across him, and I was really concerned that he was carrying a major foot injury.

As if the pain was to be beaten, he actually sped up, and I followed as we made our way through Hove and onto the seafront. By now, we had discussed and agreed that we felt it incredibly unlikely we’d hit our 24 hour target, so we slowed down. We saw no point compounding our pain to finish a few minutes later than 24 hours.

We reached the 100Km marker at Brighton Pier 23 hours and 50 minutes after we’d started in Kempton. This was a massive achievement, and we celebrated by sitting down! I checked my texts and Facebook, and saw numerous messages of support. This was too much.

We rallied, and made the final 2.9Km along and then up from the sea front to Brighton racecourse, with Andy at something of a sprint, to the finishing line in the glorious morning sunshine. It was all I could do to keep myself together as we were cheered on by people we didn’t know. We crossed the line together, arms over each other’s shoulders.

It would be easy to try and set out a list of Do’s and Don’ts, but everyone is different. For example some people did the course in trainers, while others did it in walking boots. Some people swear by Compeed products, while others don’t give it the time of day.

Irrespective of your level of general fitness, training has to feature high of the list of Do’s.

One thing I’d do differently is that I’d have walked the night stage in advance of the walk. I found it incredibly sapping not knowing where I was, what was coming and how far away things were. Oh, and I’ve have packed another can of JD & Coke. I had one at 60K, and another at 70K. They probably shouldn’t have helped, but they did! It gave the night walk some sense of normality and provided a welcome distraction from focusing on the problems.

Tip 1: Love your feet. Be fastidious about sorting out your feet, boots and socks.

Tip 2: Everyone says this, but the stops take longer than you expect, especially if you need patching up

Tip 3: Have a support driver if you can – it’s a big motivational help, and can transport clothing and/ or food that you may not need or want to carry the whole distance

Tip 5: Drink. Drink. Drink. Even through the night, it’s important to keep chugging the water, ideally with electrolytes to maintain salts

Tip 6: Chat to your fellow walkers. They may need encouragement or help

Tip 7: Love the event crew. Most aren’t getting paid, and it’s the middle of the night for them too

The sense of achievement and pride that we feel in having completed the event is immense. This article is written less light-heartedly than some of the others, and this reflects what we experienced. You’ll see that from 65Km and about 14 hours, it was hard going, and we both had to dig deep.

Andy’s motto is “Learn from everything you do” and mine is “Try everything once“. DC’s is “Keep smiling“. We all lived our mottos!

I can’t thank the marshals, first aiders, crew and search & rescue teams enough. They provide constant support, encouragement and practical assistance. For me, their moral support was really important, knowing that I was walking towards friendly and practical support.

About 600 people signed up, about 480 people started and the completion rate was just over 70%. It’s a tough event, but it’s one that will live with you, and you’re raising money for a great cause.

Are we doing this again next year? NOT LIKELY! But we’ve said we’ll volunteer as marshals.