After a season of industry, some dubious bee mid-wifery, and the ongoing defence against the ever present wasps, our girls should be entitled to fold their wings, kick out the boys, and enjoy the fruits of their labour.

We’d cropped a couple of supers early in the season as we don’t want to play super jenga, and frankly we’ve spent a lot of money on bee-keeping equipment over the last 2 years. I’ve been told by the Boss that we’re not allowed any more supers, and if I think otherwise, I can take my duvet to the apiary, and get comfortable. (She rules with a rod of iron does Mrs L).

While this had created some spare capacity, and saved us a few quid, we still had 6 supers to harvest. Deciding when to harvest is (to us) a relatively complex equation that needs to take into consideration how full and how capped the super frames are. If they’re not full enough, you’re wasting your time. If they’re not sufficiently capped, the moisture content of the honey isn’t right, and what you end up eating, or selling, won’t be good. Leave it too long, and you run the risk that they eat it before you get to it.

The flow (the time during which there’s a good supply of nectar and pollen) has come to a slightly premature end – due in most part to the hot and dry summer that we’ve had. Up until the last few weeks, the flow had been exceptional, and many of our bee group had been stacking 2, 3, 4, 5, or even 6 supers on top of their hives.

Through July we inspected our supers, knowing that we’d need to take the plunge at some point, else starting varroa treatment would be delayed, and shutting the hive for the winter would be too late in the year.

Figuring that we needed to get on with it, we had a rock-and-roll Friday night.

Suiting up and lighting the smoker, we arrived into the apiary, and if I’m honest, I felt (and still feel) like a heel. It’s an old expression, but it sums up my feelings 100%. Why? 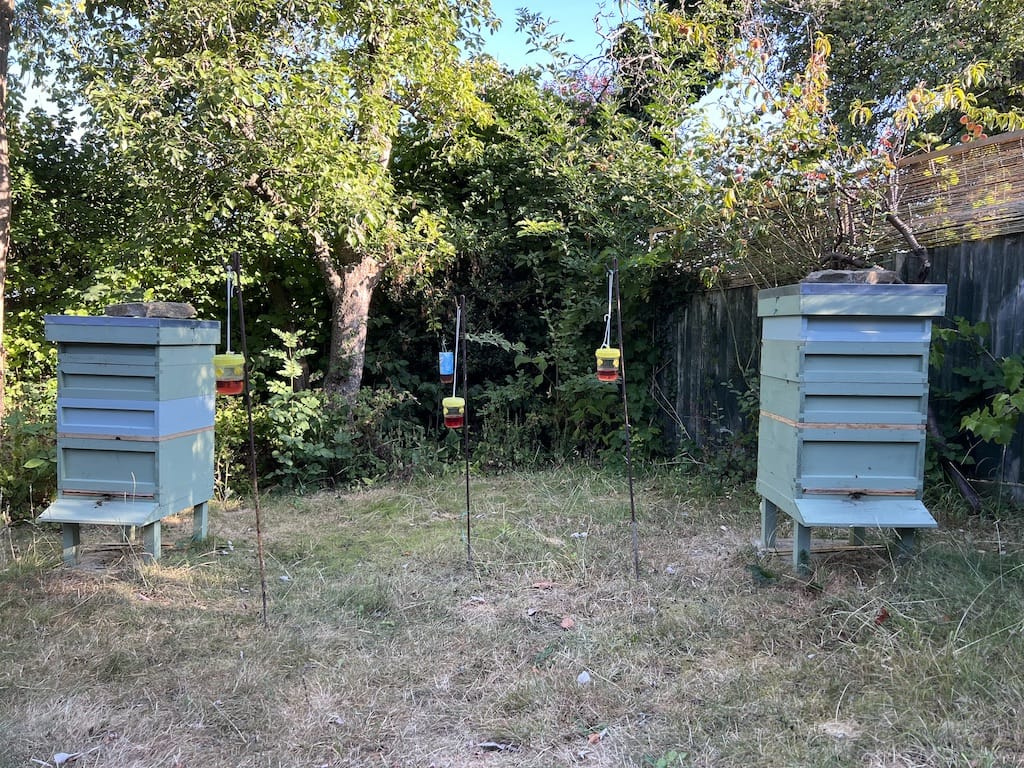 Arriving into the apiary we found a familiar scene.

The bees were arriving back at the hive in large numbers. They were leaving the hive in equal numbers. More importantly the wasp population had sky-rocketed and they were doing their usual shitty flights around the hives – scavenging. Go and find your own food you lazy twats.

From time to time you see a bee engaged in a death battle on the ground with a wasp. It doesn’t feel like a fair contest – given the stinging options open to the wasp. Fuckers.

Through trial and error, we’ve found that wasps love alcohol free Rekorderlig fruit cider with a splash of home-made gin (we absolutely do not have a still). There are few things in life more gratifying that watching a wasp trap itself (watching Man United lose is a close second).

And here we were – arriving to steal the very thing that they’d worked so hard to produce, and were working so damned hard to protect. Heels.

Anyway, we parked our consciences, and set about removing their winter stores. And, god bless them, they were so placid and accommodating of our shameless theft. Sure, there were a few in the air, but they were mostly going about their usual chores. Oh for heaven’s sake girls – be angry.

Getting the super frames out of the hives, and bagged up was an exciting battle between the girls who wanted their dinner back, and the wasps who wanted a free dinner. As quick as we shook them off, we had them back again. The garden took on a distinctly live buzz as word got out that Robbers were about.

Finally getting them into the (now carefully closed) house we set about spinning the frames. I won’t bore you with the details except to say that honey goes absolutely everywhere, turning our otherwise pristine (as if) house into the aftermath of a particularly ambitious and lengthy sploshing session.

By the end of the weekend we had 39Kg of delicious tasting golden honey, plus about 6Kg of early season set honey that’s started crystallising in the jars.

I’ve done the maths (or math as the Americans would say). Would you care to hazard a guess as to how many bees have contributed to our 2022 honey crop?

We have a lot of jars.

The whole garden should crunch to the sound of dead girls… :o( 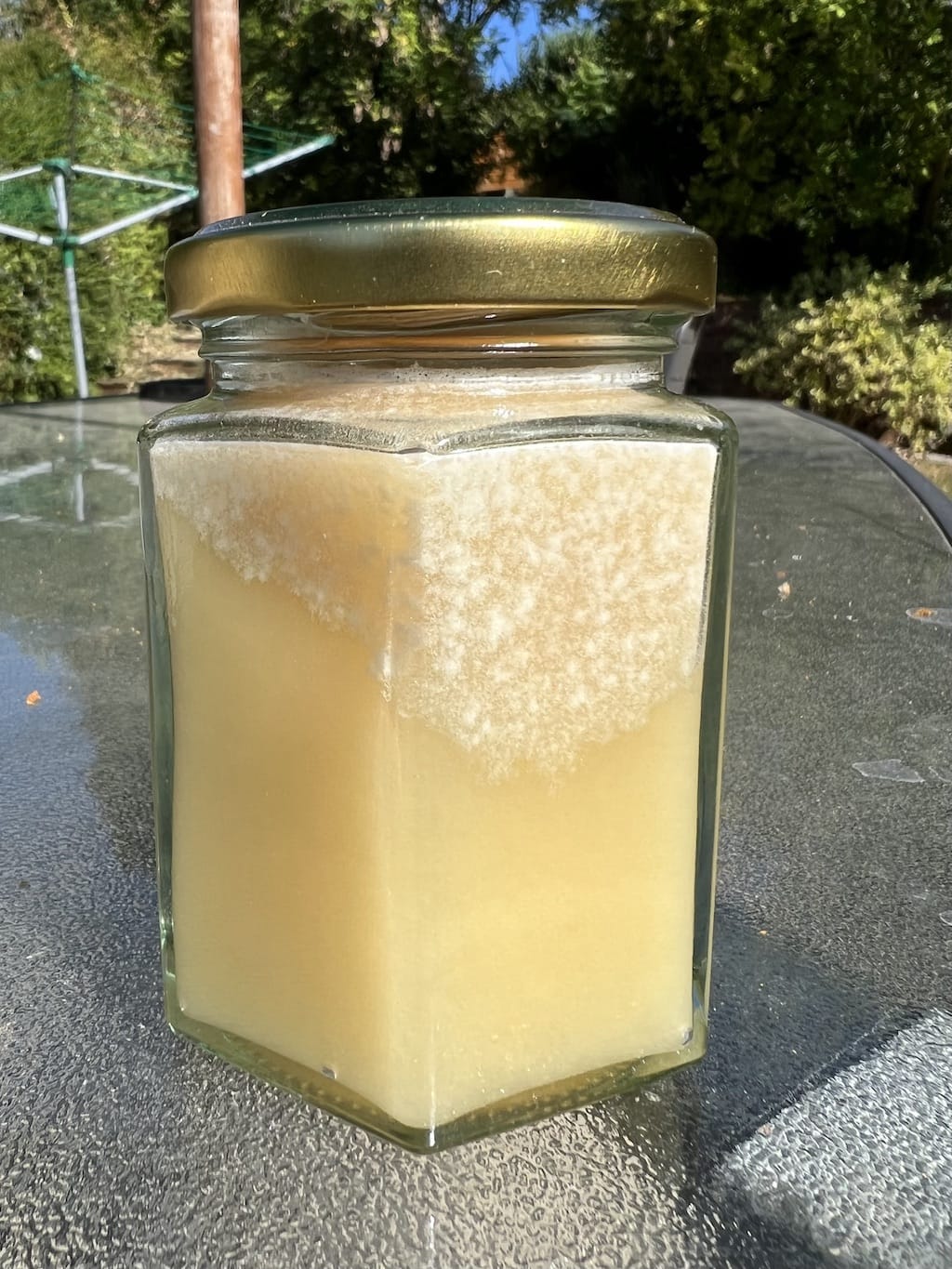 Having stolen their stores, you (as bee-keepers) return the supers for them to clean out. On the face of it, this is good. They get a snack. A tasty treat. Hmmm. Imagine going to your favourite restaurant – the one you’ve been carefully saving up all year to visit as a special treat. The chef arrives, presents you with the finest food you can imagine. Then whips it away. And then returns 5 minutes later, wiping gravy from his chops. He hands your dinner plate back to you – except that now there’s just a little jus where that 12oz rib-eye used to be. And he burps over you as he does it. We did much the same. Heels.

Events in the Ukraine or elsewhere will pale into insignificance if the collapse in the pollinator numbers continues. Remember the time when you’d get to the end of a car journey and the windscreen and wing-mirrors would be bug cemeteries. Not any longer. We keep bees for a few reasons, foremost of which is to give them a helping hand. As I’ve said before, they’re incredible creatures. Incredibly resilient. Incredibly vulnerable.
previousThe Yorkshire 3 Peaks
nextCocktails for wasps