Walking the Shipwrights Way was Andy’s idea. Let’s put that one right on the table right at the get-go. I’d never heard of it, even though I’ve lived near to it most of my life, and have (unknowingly) walked on and across it many times at Alice Holt Forestry.

Over a beer, or 6, we discussed the route, and concluded that at 50 miles it would have been within our ability to complete it in day at one point, but unless we were going to train for it (which seemed rampantly unlikely), it would be hard work at best, and more likely deeply unpleasant. We settled on the decision to walk it in two go’s, and then wrangled with North -> South – being “downhill to the sea” and finishing in Portsmouth for fish and chips, or South -> North – walking us towards home and a lift home.  We settled on South -> North, though more by lack of violent disagreement than unwavering mutual enthusiasm for the choice.

A rudely early Uber got us to Pompey and the notional start of the walk – the Shipwright’s Toolbox. Well, I say that we got to the start. With a combination navigational ineptitude and a nagging knowledge that there was a ferry to catch, we took some pictures that showed we’d (probably) been in the right postcode, and set-off, with Andy in charge of directions. 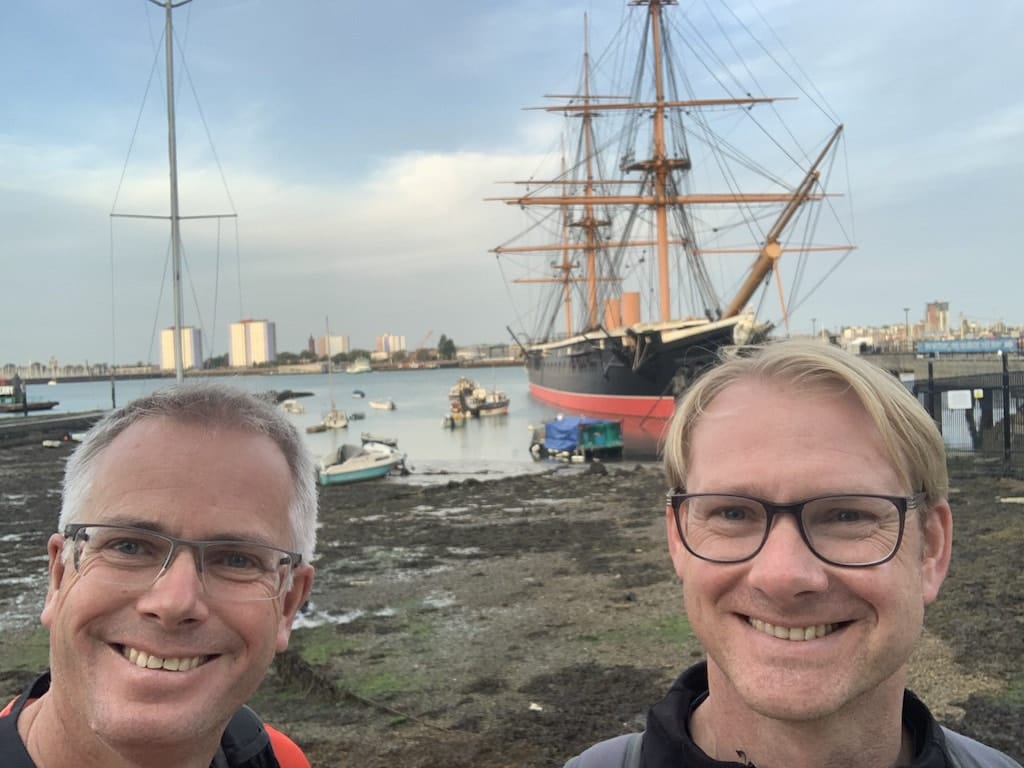 Portsmouth early on a Saturday morning left much to be desired, as did the navigation (as we’ll come to). We dodged broken glass and dog shit as we picked our way through the aftermath of the previous night, until we hit the sea-front, at which point the view, and life generally, were both much better.

We yomped purposefully along the sea-front, past the Eastney nudist beach (too early for clothing optional walking), and realised that the (hourly) ferry was soon to depart, so we got a wriggle on, more or less running to the slipway. Contented by the fact that we’d made it, we enjoyed the short trip across the water and re-fuelled on the other side. Walking along Hayling Island, we relaxed a little, with no fixed timescales to achieve – just a pub to be found at the end. 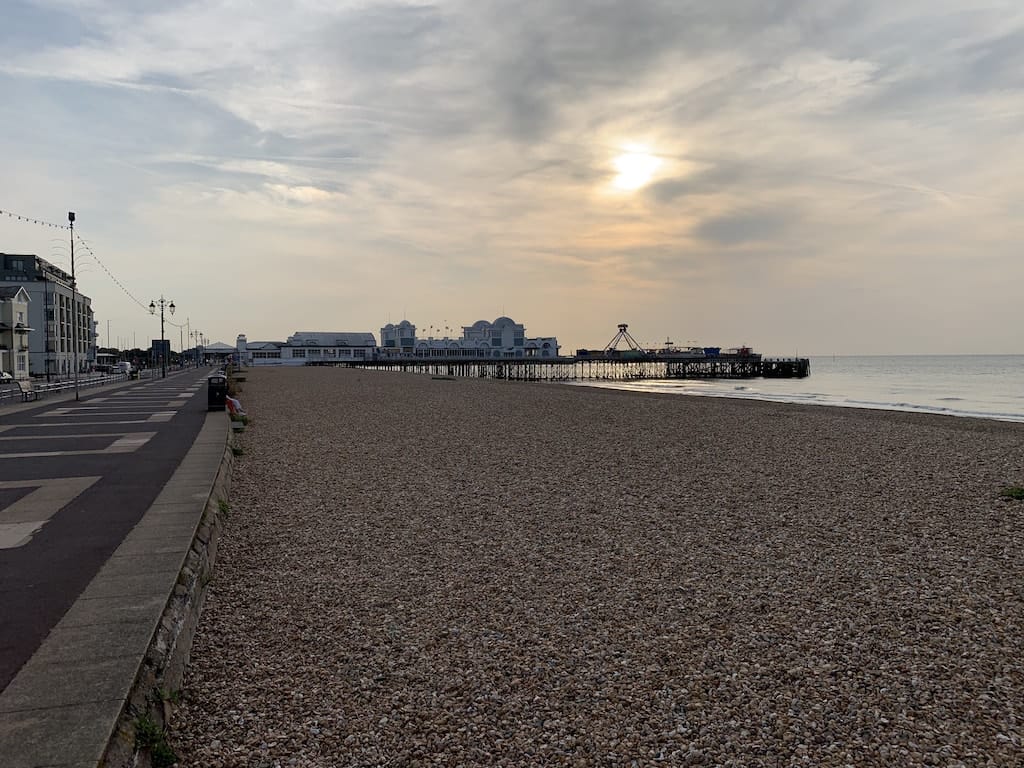 After some discussion, we turned left and started walking North up Hayling, towards the mainland. The walking was on a busy road, and not the leafy idyl that we expected the boat-builders of yonder-year would have dragged trees along – undoubtedly singing as they toiled. Having had a shouted conversation above the road noise, and sucked in lungful’s of car fumes for what seemed like a day, we realised our mistake, and found the Hayling Billy Trail – a delightful stroll along the water’s edge. I gave Andy my hardest Paddington Bear stare about the woeful navigation, and we continued – the route, and my mood, improving with every passing step.

We made the mainland (20Km) in a whisker under 4 hours – not bad all considered. 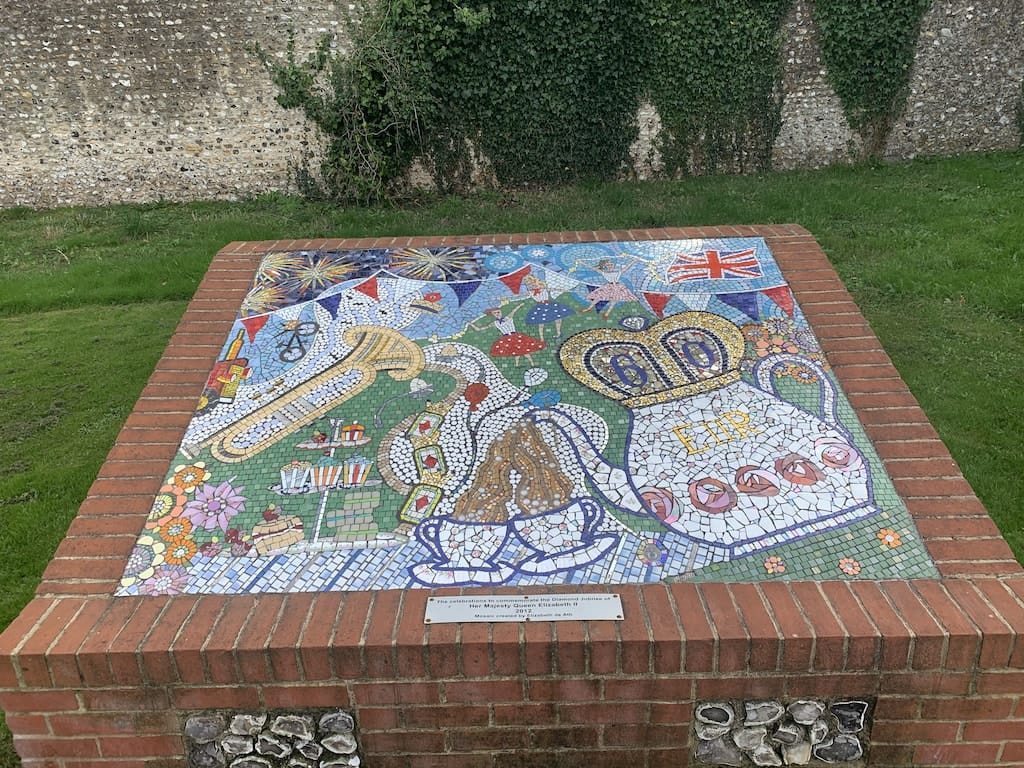 Lunch was at Staunton Country Park – something of a detour from the most direct of routes, but it had a café, loos, and benches, so it was time well spent getting there. We sat in the sun, rested our feet, ate food (well, Andy did) and recharged our flagging batteries. I picked absent-mindedly at the usual suspects of pizza slices and pate rolls.

On we yomped, through beautiful countryside, ticking off the statues that are dotted along the route. They’re a quaint concept that attempt to unite the different parts of the route, giving it a sense of cohesion that might otherwise be lost. 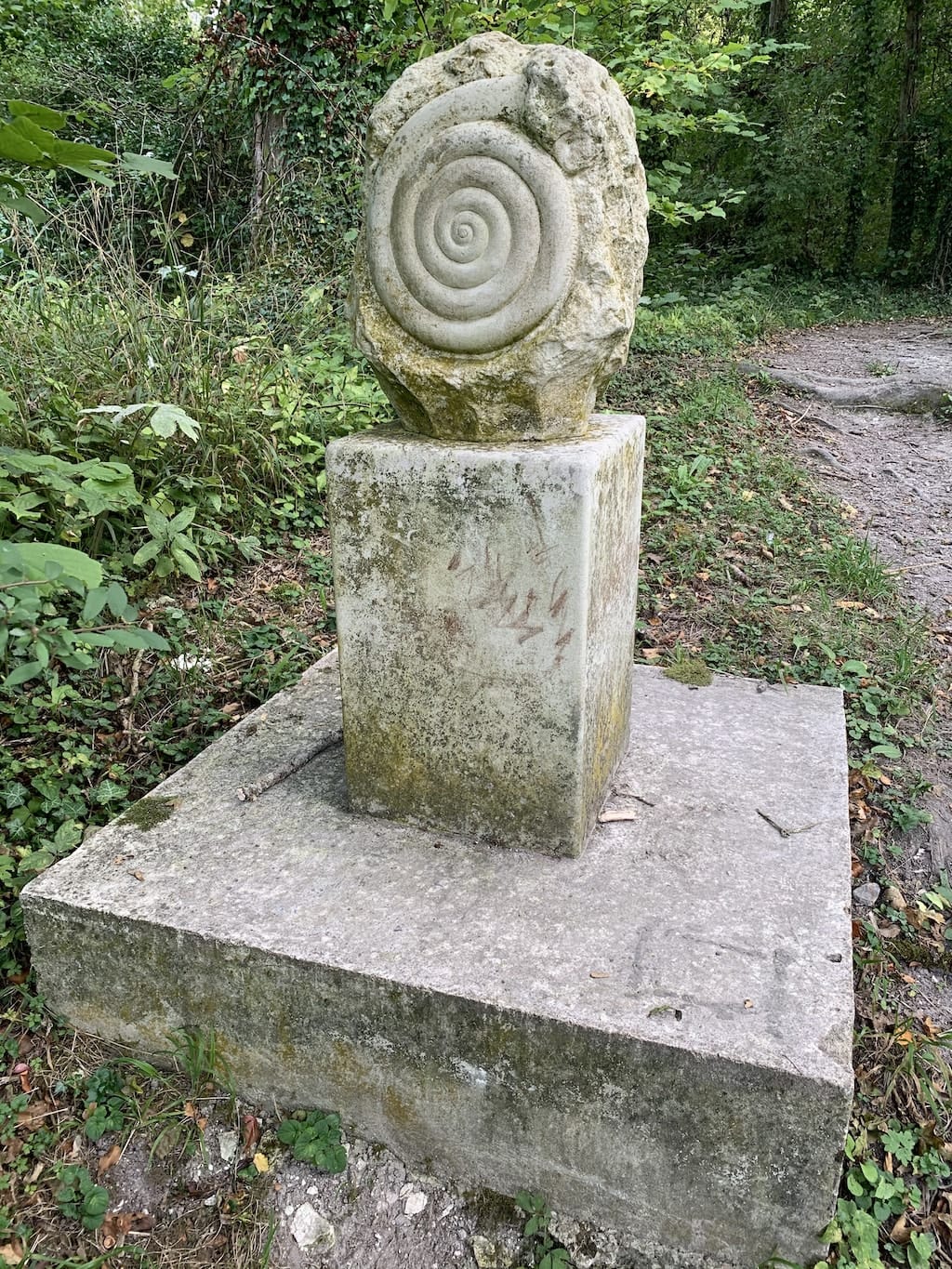 Reaching Queen Elizabeth Country Park, and deliciously within range of the finish, the walking changed from flat and accommodating to undulating, flinty, and frankly prickish. With the weather now on the top side of warm, and with feet that wanted to be doing something else, I could feel my bonhomie seeping away, and so we had a blast of David Bowie, which lifted the spirits. By this point in a walk, navigation goes from important to critical – with the prospect of mistakes and wrong-turns deeply unpleasant. I could sense that the route was taking a weird direction, and fuck me, wasn’t it just. After the event (see below), I know why they’ve routed it as they have (to take in a car park with café), but I wish I’d trusted my sense of direction, and cut out a useless detour. I don’t believe for one second that the shipwrights of centuries ago lugged logs a yard, or furlong, further than they needed to. 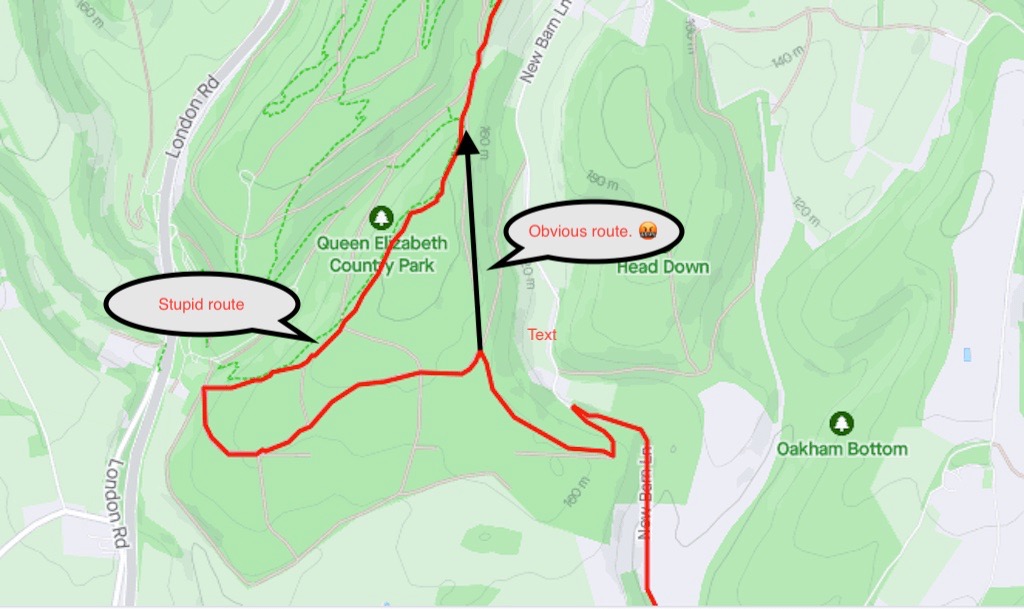 Buriton was the last place of interest, and had a real charm to it – quite a nice place to live, I’d imagine (and pricey AF as well I expect). From here, getting to sit down with a pint was becoming an obsession. My hands had turned into swollen caricatures of normal (fish hands Andy?), I’d adopted the routine of sighing every few minutes or so, and any thought of walking beyond Petersfield had been truly scrapped. A final kerb-side rest and half a bag of wine gums, and we attacked the last 5Km or so that stood between us and rehydration. Yomp. Yomp. Sigh. Yomp. Yomp. Sigh. The final streets of Petersfield were purgatory, but worth it in the end. We collapsed into a pub, drank too much too fast, and routinely complimented the staff on their professionalism. The day closed with a feast at Spice Lounge, with a much needed curry, and a Cobra or two. 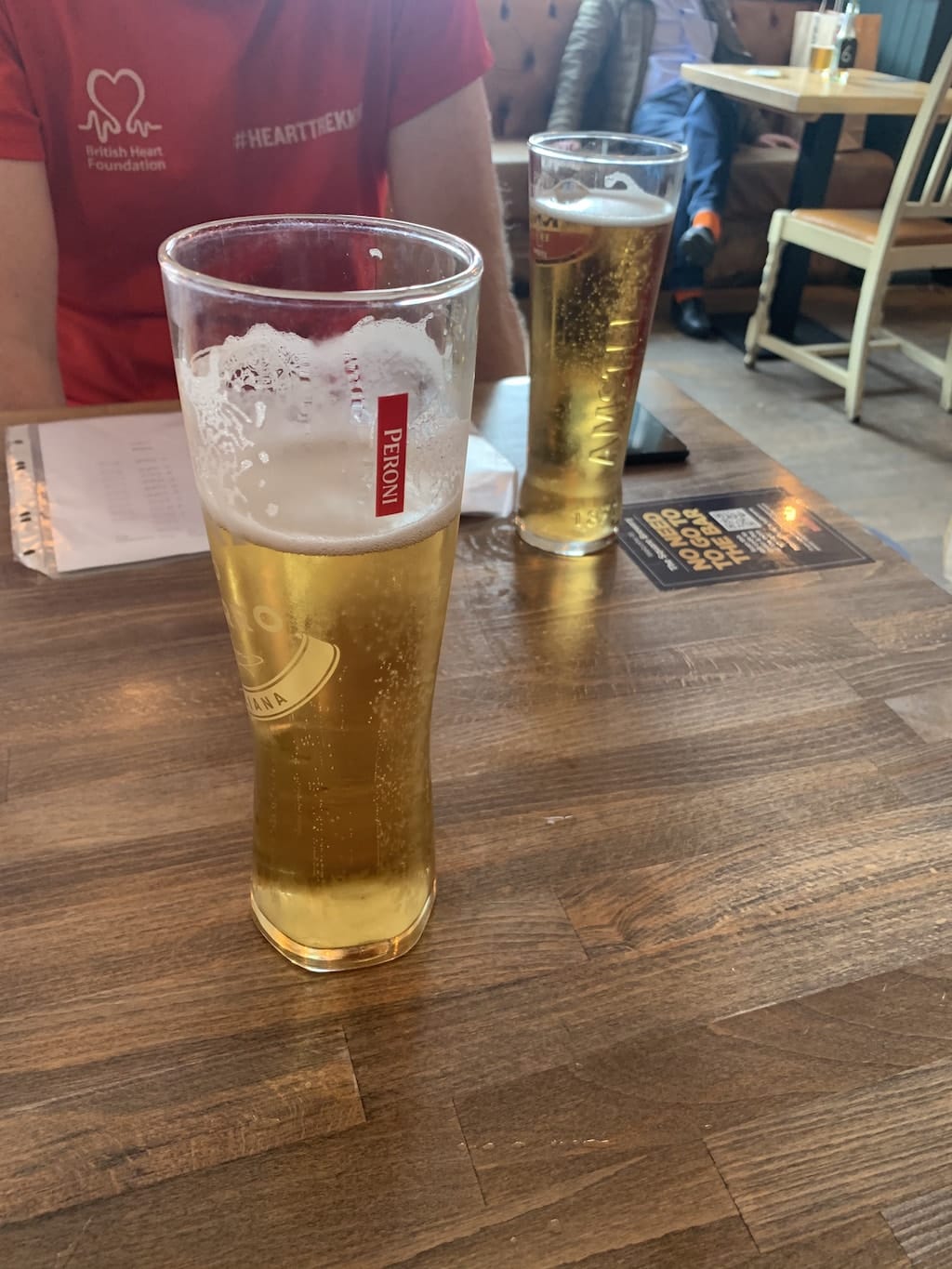 The grown up bit: Navigation is a shared responsibility, but where’s the fun in being grown up.

PostScript: Nobody should go out in Petersfield, or anywhere else, in orange socks.