The present Allen House Grounds are the northern end of a grand garden, that once stretched from here to the rear of Allen House, a mansion on the Upper High Street, opposite the Royal Grammar School. The house was built in about 1660 by Thomas Canfield. It was a fine brick building with six pilasters running through, three storeys. Architecturally, it was in a rather grander version of the “Artisan Mannerist” style seen at Guildford House, which, was being built at the same time.

Anthony Allen, a London lawyer who held the post of Master in Chancery, bought the house in the early 1720s. From then on it was known as Allen House. A map and engraved view of Guildford were published in 1738 and 1739. They both show Anthony Allen’s mansion house. Behind the house a formal garden has a broad avenue with statue and spiral maze. The 2009 refurbished garden includes a maze as a reference to the garden’s history.

Beyond it, the map shows the rectangular plot which Anthony Allen bought in 1739 from Jonathan Turner. It is this plot which forms the present Allen House Grounds. It became a walled garden with a summer house (now known as The Lodge) and a fountain. In 1782 the Allen family sold the house and gardens and the property passed through a number of hands. In 1806 it was bought by the Reverend H.G. Merriman headmaster of the Royal Grammar School, who used it as a boarding house for his pupils.

Merriman retired in 1874, and sold the house to Frank Apted, a Guildford businessman and benefactor. It was his intention to give the garden at Allen House to the town as a public open space. He died before he could carry this out, and his daughter eventually carried out her fathers wishes in 1914 by transferring the present Allen House Gardens to Guildford Borough Council. In the same year, H.A. Powell presented the 3 ½ acres of the former garden to the grammar school. It was on this field, from 1958 onwards, that the school built new buildings that involved the demolition of the mansion in 1964. Now only the Allen House grounds remain of what was once one of the grandest properties in Guildford.

Location: Side wall of small brick building, near the maze, Allen House Gardens 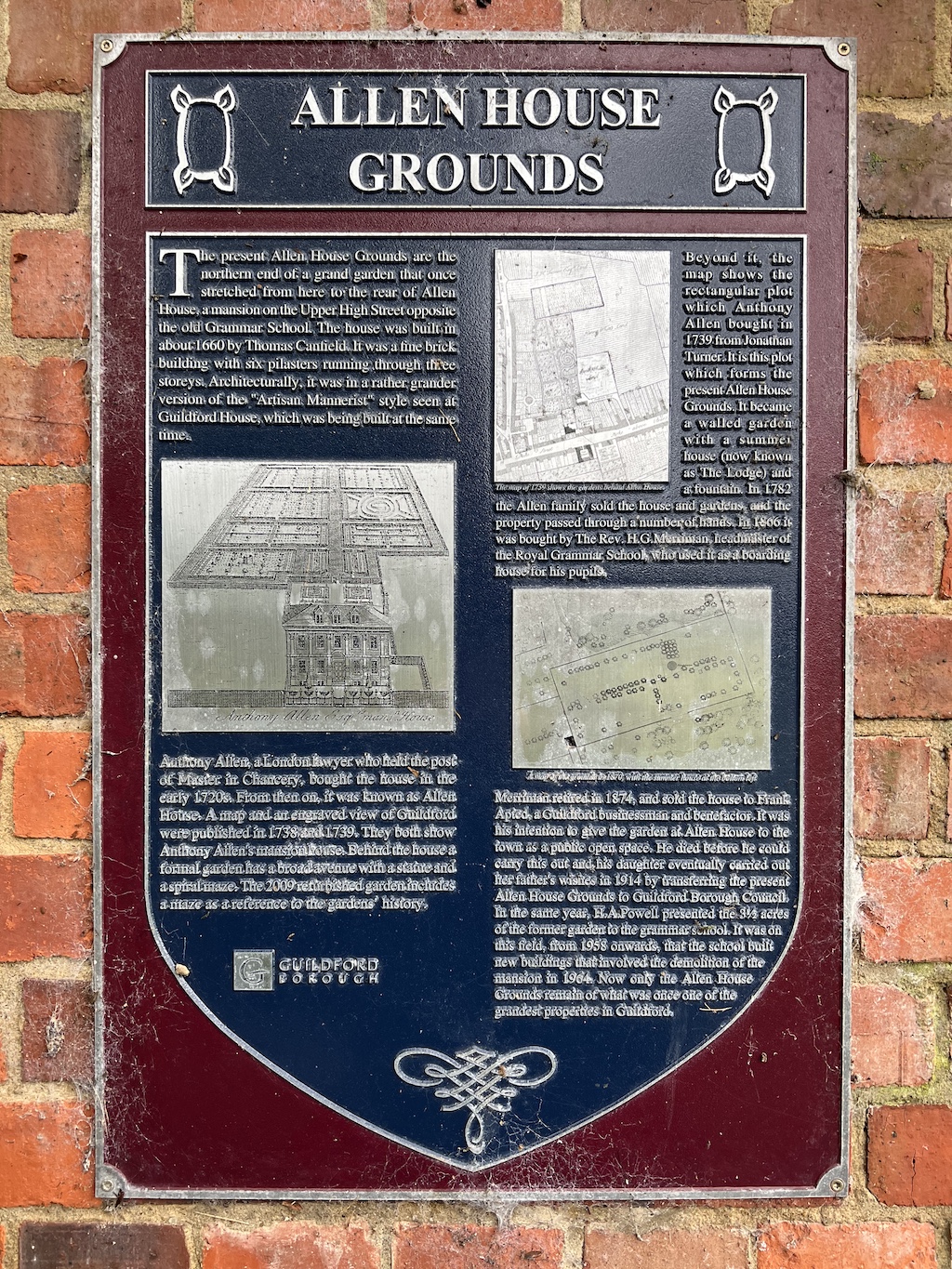