While not as demanding as some of the other “challenges” we’ve undertaken, the Surrey Three Peaks had the distinct advantage of being on the doorstep, and so a little more friendly to the environment.

The original plan had been to walk from Weymouth to Lyme Regis, possibly in a day, and possibly with an overnight in West Bay. To be honest, when I visited West Bay with Jen on the way back from Lyme Regis a few weeks back, I wasn’t sold on it as a destination, and so a long day-long yomp along the Jurassic Coast had beckoned. A single-day trek from Lyme Regis to Weymouth in a day would be a longish haul, made less appealing by the fact that the South-West Coast Path makes a significant departure from the coast near Lyme Regis due to coastal erosion. As diaries filled up, and financial pressures mounted in various quarters, we made the pragmatic decision to swap out some Dorest deliciousness for some Surrey sightseeing. The date neared, and training was non-existent. We had a relatively earnest conversation as to whether to walk clockwise or anti-clockwise. Starting at Holmbury Hill, taking in Leith Hill and then Box Hill was the shortest, but glancing at All Trails, a lot of it appeared to be on tarmac. Going clockwise, starting at Leith Hill, taking in Holmbury Hill and then yomping to Box Hill involved a bit of duplicated walking (3/4 mile as it turned out), but the vast majority of the walk was off-road. The decision was made – we’d walk clockwise.

Parking embarrassingly closely to the first of our “summits” we ambled the 3/4 of a mile from car to the tower. The mist hung heavy over the view below us which was something of a shame, but as neither us was Bruce Almighty, there was nothing to be done except enjoy as much of the view as there was. We had packed light for the day, and so the shop in the foot of the tower was the ideal place to get a top-up sausage roll, except that we were too early for that. We decided to enjoy the view from the top of the tower, and started ascending the darkened stairs before being somewhat barked at that we couldn’t just walk in and climb it. Feeling chastened, and with stomachs rumbling, we set off for Holmbury Hill.

The walk to Holmbury Hill was jolly pleasant. I’m aware how old that phrase sounds, but it seems apposite. The walk was generally easy. Andy was doing a fine job of navigating, and the conversation flowed. We stopped off at a happily discovered, and very busy, tea-stop with several hundred Lycra clad cyclists waddling around in cleats, enjoying cake and coffee. (I’m a road cyclist, so I feel OK talking about “waddling”. There’s no easy and flattering way to move around in snug lycra with blocks of metal under the sole of your feet). With sausage rolls and coke inside us, we scaled the side of Holmbury Hill, and sat for a bite to eat. The view before us, stretching as far as the South Downs was just beautiful – though quite hazy. For an area that can feel densely populated, we could see little evidence of urban development before us. We discussed travel, and I adeptly lowered the conversation remorselessly. It wouldn’t be a walk without some childishness. 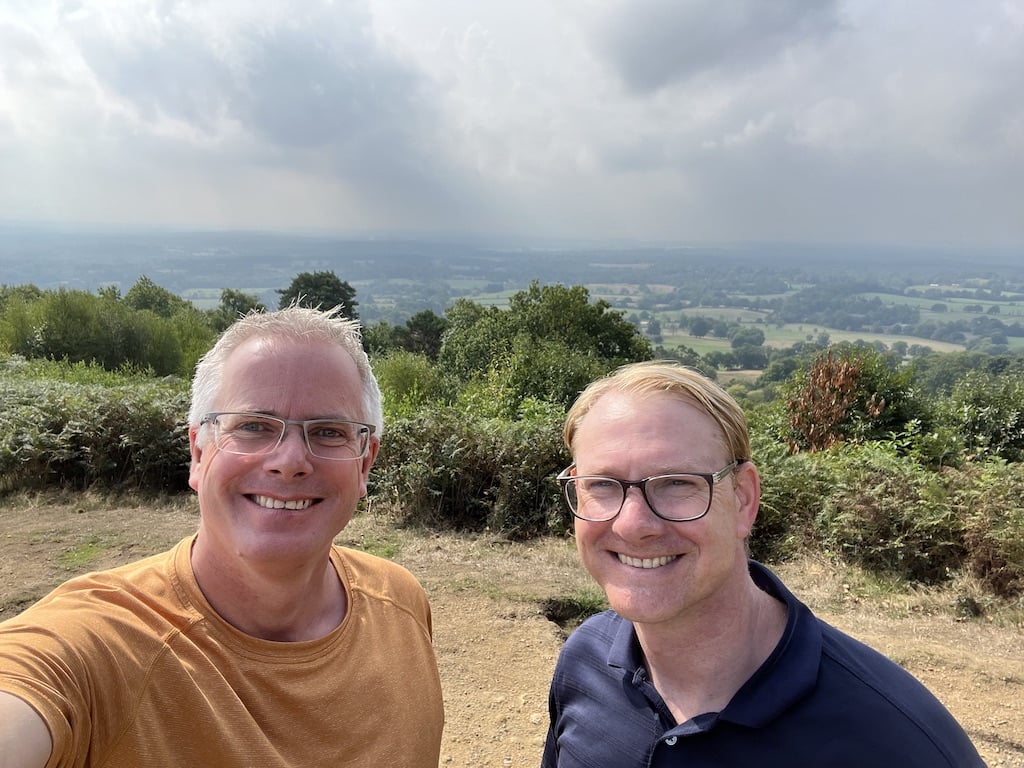 On this stretch, we formulated our business plans. We’d launch B-9 Property Services (name to be confirmed), which would specialise in buying, renovating, and selling on or renting property in Dorset. Knowing that cashflow would be critical, we’d bank-roll the operation from the cash-cow that would be the You-Poo (see Yorkshire Three Peaks) and we’d bring the He-Pee on stream (nice). The major issue is likely to be counting the cash – a bit like Brewsters Millions. The section from Holmbury to Box took in some familiar names, but places I’ve rarely walked. The area around Friday Street and what appeared to be man-made (?trout?) ponds was lovely. We also found the only instance in the world where un-pumped water actually flows up-hill. A concrete gully across the track saw water emerging from our right, and defying gravity, before disappearing into a field higher than it had started… The miles passed by. Liverpool conceded a goal in the Merseyside Derby. It was disallowed (thank you VAR), the countryside continued to delight, and life was good. 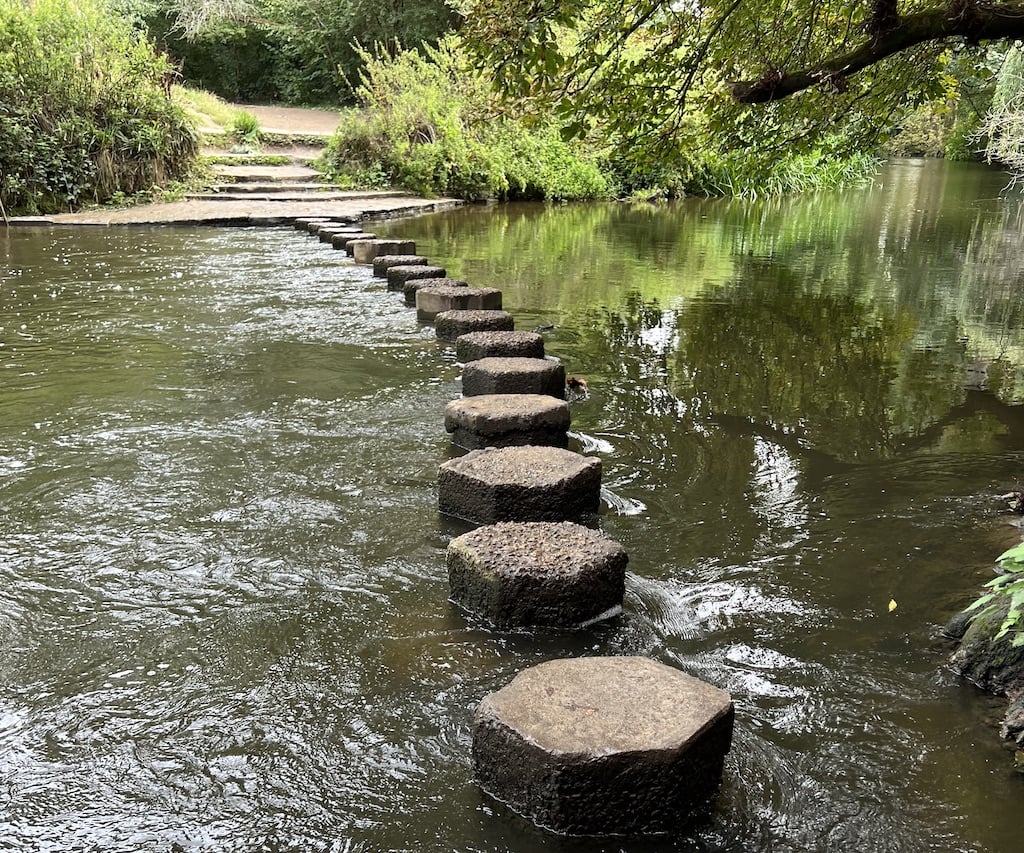 As we walked up towards White Down, and with Denbies, the railway line, and Dorking down and to our right, the views opened up beautifully. It was the day to throw down a blanket and while away a careless hour or two under the warm sun. But, much as we’re good mates, that’s not a feature of our friendship, and so on we strode. Steers Field offered up a herd of particularly vicious Belted Galloways (some of my favourite cows – they’re just like giant, hairy humbugs), and at Ranmore Common we were offered food and drink courtesy of some wonderful event crew. Before we knew it, we were walking through Denbies, and dodging the Denbies Wine train. The Stepping Stones over the River Mole demanded some concentration, before the set of (really quite unpleasant) stairs that saw us emerging onto the lookout – in what was now sublime weather. With Surrey and Sussex stretching out in front of our eyes, we took the obligatory snaps, admired the view, and made our way back to the start.

At 12.8 miles it’s a decent walk if you’ve made no preparation. The walking is generally very easy. The summit “climbs” are family friendly. There’s plenty of opportunities to get food and drink along the way. If you’re doing a linear walk, as opposed to the circular one, suggest taking the clock-wise/ westerly route to minimise the amount of time spent on roads. 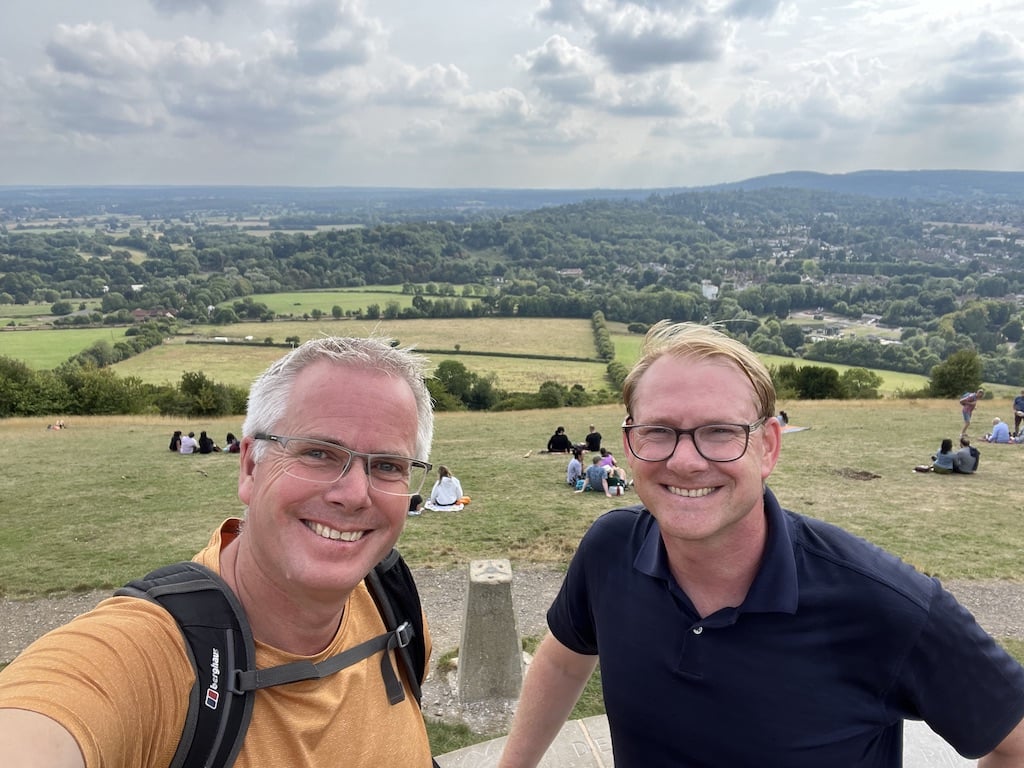