A 30 foot wee, mountain rescue, nearly falling to my death, and leaving a trail of soggy footprints through a pristine B&B were some of the highlights of my Snowdon walk up the Rhyd Ddu path.

With the Yorkshire 3 Peaks walk not too far away, and with long-COVID basically flattening me, I decided that I needed to give myself some confidence that I’d be able to complete the Y3P, or bail out early enough to get the deposit on the AirBNB back. I wanted and needed to walk mountains, rather than reps of Box Hill, and with nobody free to walk with me, I picked Snowdon. It’s very much a known quantity, and while I’m respectful of all mountains, I felt confident tackling Yr Wyddfa on my tod. I woke to an unsocially early alarm, set the sat nav, and headed North. Although it’s a reasonable drive, I love the journey, and the anticipation that it brings. Arriving into Llangollen I always feel that I’ve arrived, and the drive along the River Dee, onwards through the many familiar names and places energises me. I got to Moel Siabod Café at about 10:30, loaded up with food and drink, and headed to the start of the Ryhd Ddu walk, passing many familiar locations along the way. The section of the A4086 from Capel Curig the junction with the to A498 is one my favourite bits of road in the world. I love the sense that I’ve arrived. Parking in the Rhyd Ddu station car park I changed, packaged everything up into my rucksack, and considered my clothing options. I had a light waterproof coat and light showerproof over-trousers. The weather was fine, and I didn’t want to wear or carry more than I had to. I left the over-trousers in the car, and got as far as the railway crossing point before I realised the folly of my decision, returned to the car, and threw them in the pack. Before this trip, I’d never heard of the Rhyd Ddu path, and only found it by Googling Snowdown, and looking for a “there and back” route from Llanberis (which this route is not BTW). I set off at a geriatric pace, content that I had ample time, the weather was glorious, and I wanted to conserve whatever lung capacity and energy I had in me. As I gained height, the valley behind me opened up wonderfully, revealing the approaching steam train. As it chugged along, it periodically tooted it’s horn, and a couple of seconds later an unseen train would toot in response. The echo from the valley was beautiful to listen to. I saw scarcely a soul on the way up – just one guy who commented on the wind, and a group of 4 gals. That was about it. Oh, and a giant caterpillar. 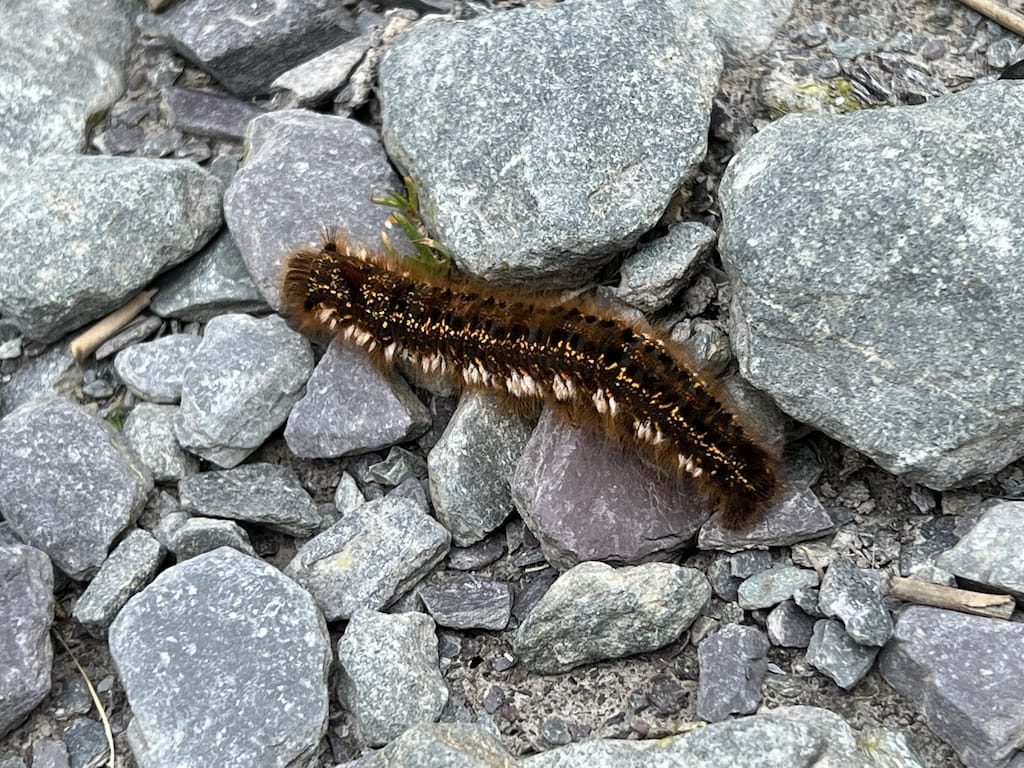 As I walked in happy solitude, I was aware of a weather front coming in from the south-west, and it looked soggy. I pondered my options, and decided to carry on. The path reared up in front of me, and my height-gain accelerated, and with each metre gained, the wind picked up, and the rain went from light mizzle to full-on wet. I donned my coat and over-trousers, and settled in to get moist. As I crested Llechog, the rain was horizontal, and it was blowing a right hooly. I stopped to view (peer at through the storm) Cym Clogwyn while hanging onto a fence post, went for a wee that must have been propelled about 30 feet by the wind, and had a decision to make: I’d read that the final section of the walk was narrow, and people fell from it and died now and again. I was tiring. It was blowing a gale. It was pissing down. There was nobody else about. And I was walking alone. Should I do it – just for the sake of it? Yep. On I went – along Bwlch Main – as it narrowed and wettened. I recall one lively point where the path was about 2 feet wide, with a near vertical rock face one side, and a drop with certain death the other. And sheep in the way. 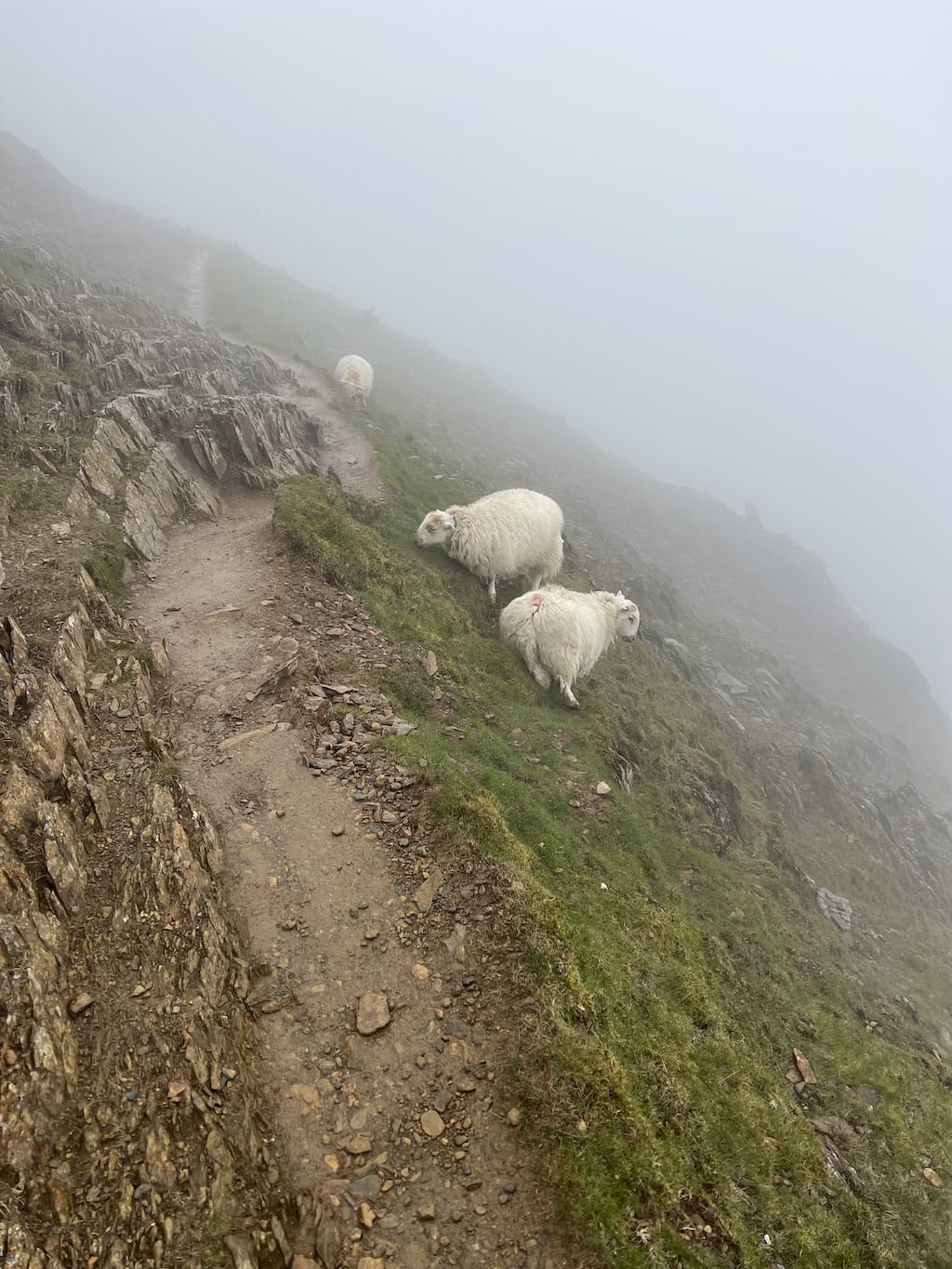 As the wind gathered pace, the rain got to the point that I could scarcely see where I was going, and fatigue was starting to set in, I had a heart-stopping moment where I stumbled, and had a sneak preview of the express route to the bottom, and my maker. I decided that rather than pushing on for the sake of Strava, I’d do the grown-up thing, and see my next birthday. The descent was harder than the ascent, with the paths now rivers, my glasses streaked with rain, and I was undeniably cold and hungry. As someone turned the shower down from “power” to “standard” I fished the cheese and pickle sandwich from my ruck-sack. As quick as I tried to eat it, it basically washed away in my hands, to the point that I was eating something that felt like it had been dunked in a swimming pool. My Yorkie bar fared better. Now sodden to my grots, I passed a substantial group of younger walkers clustered around one of their number who was clearly in trouble. With no mobile signal on my phone, no emergency supplies, and no first-aid I carried on to the car park – at which point a Sea King helicopter passed overhead. 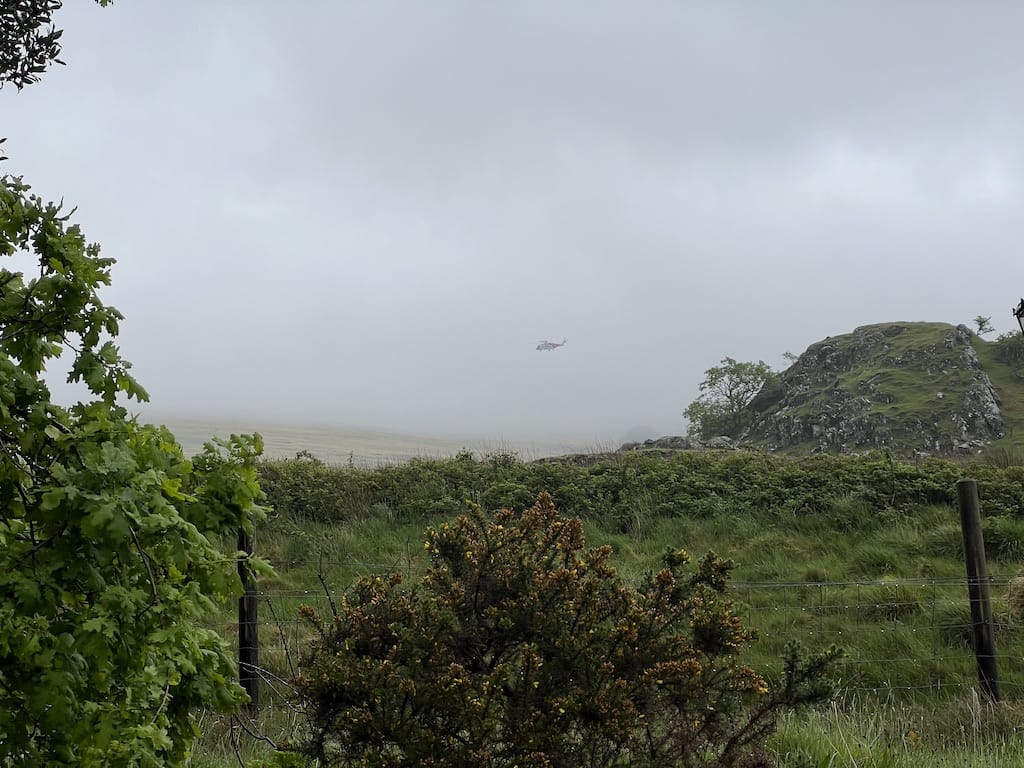 Drying myself to the point that I could actually see where I was going, I drove to the Glyn Peris B&B.

Arriving into the hallway, sodden, I was greeted with a degree of disbelief. My boots were wet, so it was agreed that I’d remove these, which simply put even wetter socks onto the pristine carpet. Removing my socks gave way to feet that were at the point of dissolving.

By unspoken mutual agreement (but with a firmly disapproving look), I sheepishly made my way to my room – the hall carpet bearing testimony to my unsuitability to an accommodation of this standard.

Tomorrow would be the Ranger Path. Tonight would be about getting dry and fed.