As such a busy route, the Ranger Path was the last of the major paths up Snowdon to be ticked off the list. Not the finest of walks or the best of weather, but I did learn a lot about the menopause.

With Rhyd Ddu behind me, and feeling good in myself and my legs, I planned a route up and down Snowdon that was linear. The B&B provided a packed lunch, and the only fly in the ointment was that my (only pair) of walking socks were still damp – even after a night in the drying room, and my (only) top was dry but whiffy.

A quick dash into Llanberis made me the proud owner of a £20 pair of walking socks, and a rather dashing cotton sleeved top. Also, I learned from a local chap that the traffic wardens are “right nazis”.

I took a cab from the guest house to the car park by the start of the Ranger Path. The cabbie was an absolutely diamond, and we talked as though we were old friends. With my clothing in my pack, I settled in to the walk, and it was immediately a world apart from yesterday’s isolation. The trail was buzzing with people in groups from 2 to a dozen or so, and there was a long line of people wending their way up the lower slopes. I contented myself with the scenery, and the cool dry weather.

Wandering in my pedestrian way, I encountered a lady walking her dog, while on the phone. As we passed, I felt that her eyes lingered, and with her behind me, the volume of her conversation was raised. I turned, and she was checking me out. Now, trust me. This is not common. And when I say “Not common” we’re talking Halley’s Comet… 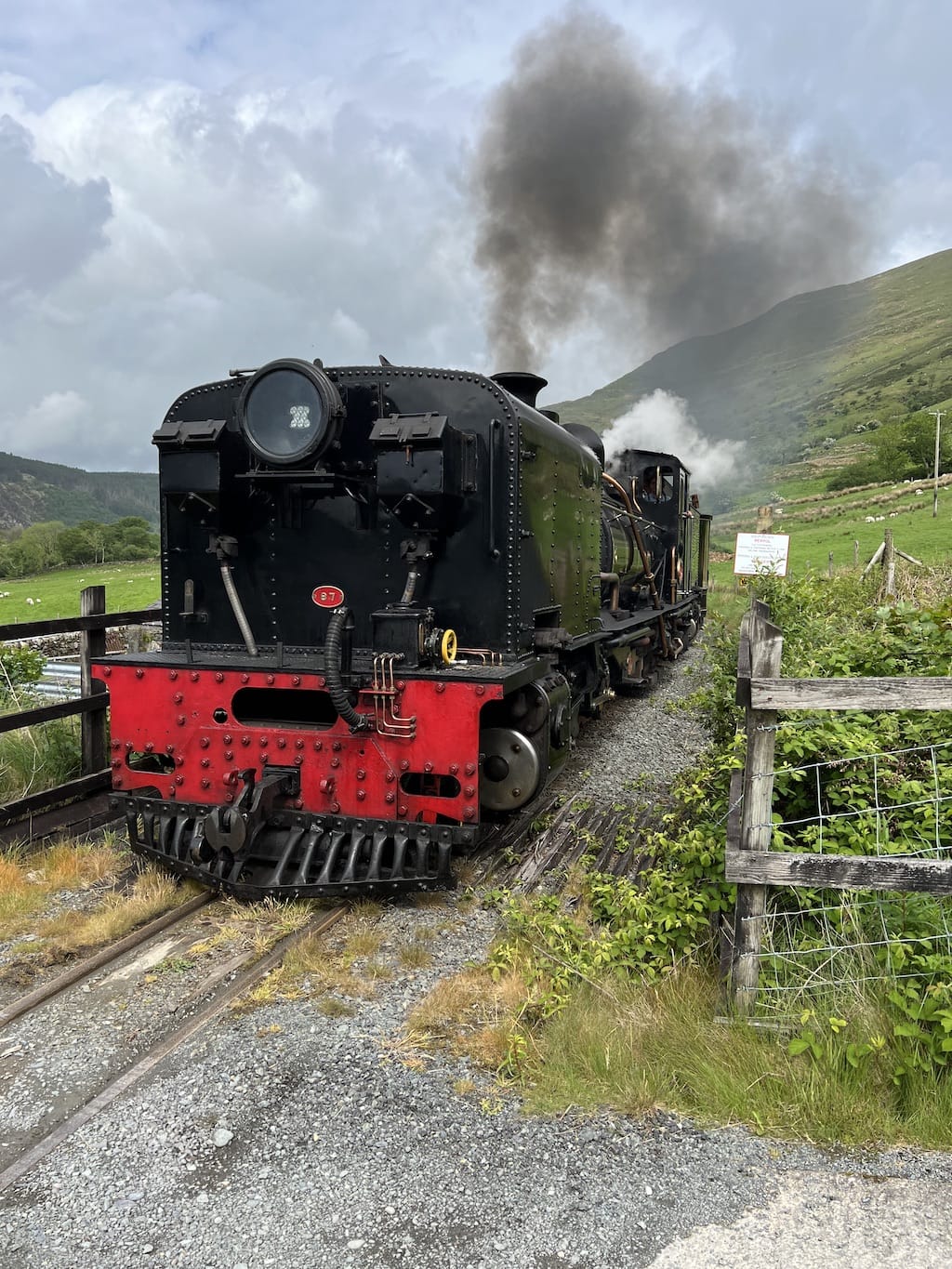 As I approached Llyn Ffynnon-y-gwas I saw a solo female walker making what appeared to be very heavy weather of a flat section of path. She launched in with “You look like you know what you’re doing”. Flattered, and surprised at the directness of the greeting, I slowed to her pace. Ordinarily I’d nod, smile, say hello, and continue on my way.

Try as I might join the party, this was less a conversation, and more a broadcast. A charming monologue where only my ears took part. I learnt enough to clone her identity in a heartbeat. (BTW. I’m not normally an apologist, and I don’ t really feel the need to justify myself. Pretty much every sentence included reference to her point in life, and the impact that this had. It left me even more happy that I will never pass through the menopause than I had been). It turned out that she’d started the day with 2 others, was due to summit, and then make her way down via a path that she thought *might* be the Watkins path, but she wasn’t sure. And she didn’t have a map… She thought there was a waterfall along the way, but she wasn’t sure…

After a while she tired of my ears, and my incessant chatter, and cut me free – leaving me to hoof it up the growing slope, as we made our way in the general direction of Clogwyn Station and the summit. A carbon copy of the previous days weather arrived, and I donned my wet weather gear, and ploughed on up into the swirling cloud.

As I made my way up, I spotted 2 female walkers, and hearing them talk, realised they could be Tracy’s “friends”. “Hello” I said, “are you with Tracy from Congleton?” The look of disbelief at this greeting from the depths of the cloud was wrote right across both their faces. “Yes. Why?” I explained that their companion was intent on summiting and following an unknown path down in the cloud without a map or, quite frankly, much of a clue. The disbelief turned to palpable anger at Tracy, and possibly by extension, me. They now had an impossible decision – push on with their walk and leave their friend to die – her bones to be picked clean by crows. Or they could retrace their steps for an unknown distance, and return her to the car park – ruining their day out. With my responsibility grenade lobbed, I walked off into the mist – lest I become part of the story. Or a pile of bones. The Ranger Path merged with the Llanberis motorway, and it turned into a zoo. Hundreds of people making their way to the overcrowded summit. I summited, sheltered behind the café, ate some food, and started shivering. The temperature was hovering around 0c, and I wasn’t dressed for it. 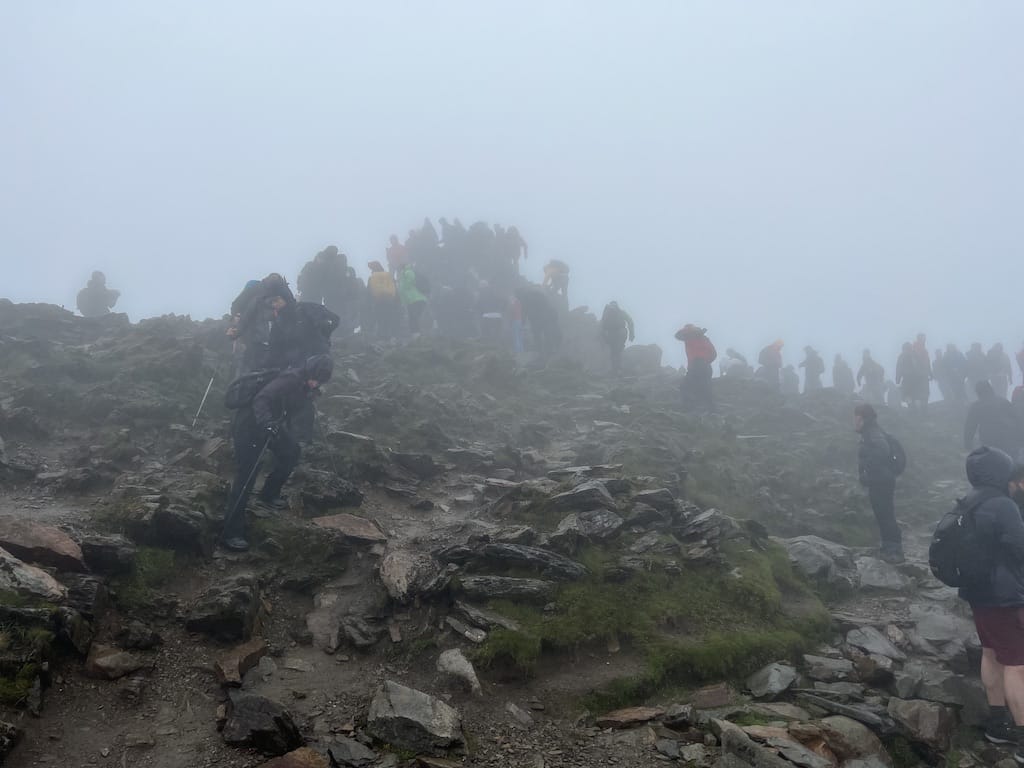 I found my way to the top of the Rhyd Ddu path, completed the section I’d missed out yesterday (this had to be done), then followed the masses back down the Llanberis path – coming out of the cloud just above Clogwyn railway station. The view down into the Llanberis Pass opened up, and I was able to push the crowds from my mind. Absolutely stunning. The lower slopes towards Half-Way House were rammed, and it surprised me at just how far it is from Clogwyn back to Llanberis. Because it’s the easiest route, and because I’ve run it up and down in The Brutal, in my mind it’s not that far. Seeing a small trail off the main motorway, I took a side shoot to some old mineworkers. As little as 50m (and only only legit paths) and the mountain is yours again. On I went, revelling in the views to my left – away towards Llyn Dwythwch. Then the old slate works towards Glyder Fawr came into view, and my thoughts returned to the Slate Man event. 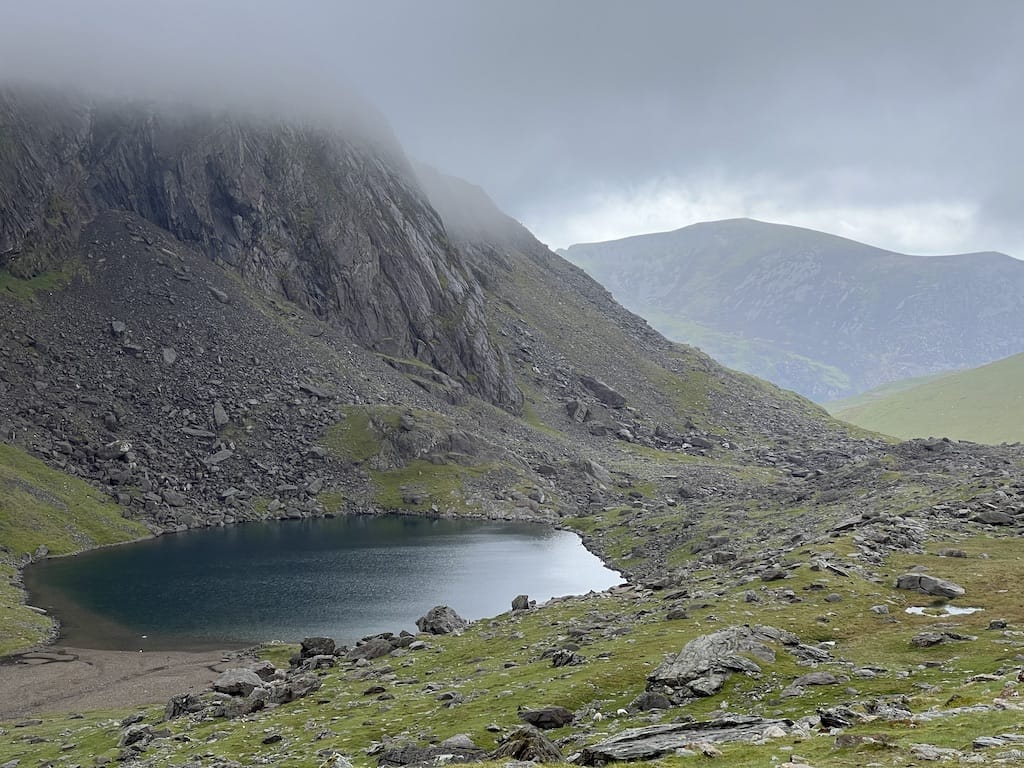 I sadly left the slopes behind, made my way through Llanberis via a much needed cafe, and trundled along the tarmac to the B&B for a lie down.

Later that evening, as I walked from the B&B to Gallt-y-Glyn (Pizza and Pint) I saw Snowdon basking in the evening sun. Having walked most of the major routes I understood the geography of Snowdon for the first time. The urge to lace up my boots, and walk to Half-Way House was immense. Next time.

So, a few thoughts.

I thrive on visiting new places, and walking new routes. That said, I’m hooked on Snowdon.

Sure – there can be a lot of people. There can be litter (it could be worse). And the weather is reflective of a mountainous area near the coast.

When the sun is out, and the views stretch way off into the distance, it’s spell-binding. It doesn’t take much imagination or planning to be away from the crowds (mid-week will do it). The strength of the mountain, and the way the shadows lengthen, deepen, and fall – with the changing light levels. I just love it, and I could spend hours just sitting and watching.

Me and Snowdon – it’s a love affair. I’m smitten.

Layers, and flexibility are key. 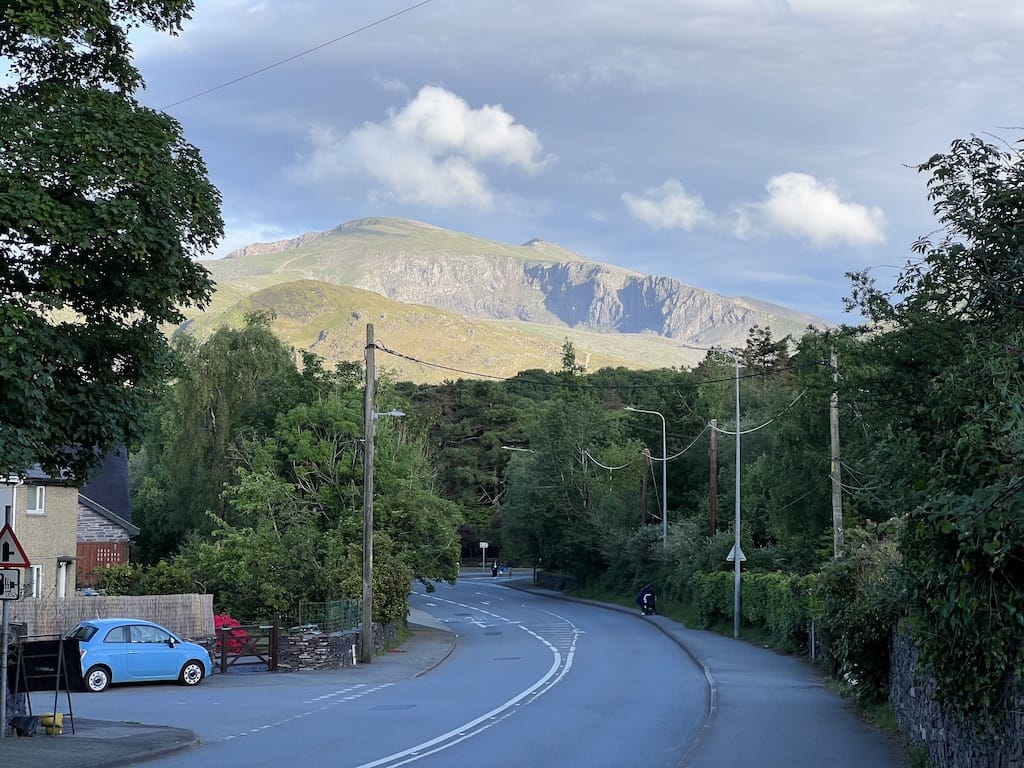