London to Brighton Trek 2019 – the event

So, the big day had arrived, and it was once again time to set off on a 24 hour odyssey from London to Brighton on foot. We cabbed it up to the start point, opposite The Stoop, and killed time before it was our turn in the marshalling pen for our motivational warm-ups, and last minute starting-line snaps.

Now, Andy and I are no slouches, but no sooner than we’d set off than we were going backwards in our wave of trekkers and runners. We quickly hit the Thames path, and checked our pace at the 5K mark, as we were passed by all and sundry. We were tracking along well enough. It’s just everyone else was hoofing it. The day was dry, with a slight early morning chill to it. Our spirits were high. Soon enough, we hit the first feed station, and what a beauty it was! Much bigger and varied than when we’d done it on the BHF route a couple of years ago. We feasted on Danish pastries, good coffee, sweets and general goodies – before setting off for the 25K station. Arriving into the 25K station, we were met by Jen who was carrying our replacement provisions, and fresh socks etc. By now, 20K of unremitting tarmac through South London had taken it’s toll on my feet, and I was already in a lot of discomfort. My pre-event foot-care strategy had gone entirely tits up, and rather than toughening my feet up, I’d softened them. Blisters from a 35K training walk about 3 weeks earlier had scarcely healed, and I knew I was in for a wretched event. Andy was messaging his brother with a series of increasingly daft and abstract quiz/ logic puzzles being put to us to solve. This mental distraction was much appreciated! The traffic, tarmac and pollution of South London gradually gave way to a more rural route, and we finally cleared the M25, with fields and more inspiring walking rewarding our efforts. Oddly, our earlier chat and bonhomie had subsided, and we walked for reasonable periods in a comfortable silence. From 25K to 50K it was a long drag, which seemed to go on forever – shadowing the M23 for much of the time. I won’t lie. I wasn’t enjoying it, and the single biggest pleasure was the kilometre markers. Without these, I’d have struggled to find much to enjoy. As the later afternoon gave way to the gloom of early evening, we reached the 50K rest area, and waited for Andy’s brother to reach us. It was a big feed station, with many walkers either finishing there, or overnighting – to complete the walk in the morning. The time dragged as we waited increasingly grumpily for our food and fresh clothes to arrive. I made a decision to ditch my walking boots, and swap to trail shoes. We scoffed as much food as we could face, ditched everything possible, donned our head-torches and wandered with little in the way of enthusiasm into the darkness of the Sussex countryside. The route was now a mixed bag of urban and rural stretches – each having it’s own up-sides and down-sides. With my feet in pieces now, the regularity of the tarmac was in many ways preferable. We trudged along now – simply getting through it. At one point, we buddied up with some other walkers, who provided a massively needed boost to our conversation and morale. Not long into the night, Andy’s head-torch batteries gave up, and his spares weren’t with him. I was able to give him one, but for much of the night he had to walk by my light. We’re pretty solid friends, but I’ve got to say, I didn’t need this on top of everything else, and nor I imagine did he. I can visualise much of the walk, but couldn’t tell you where the 75K station was. I know I ditched my JD & Coke to a very grateful marshal at one station. These had worked a treat last time we’d walked. This time. Well, they just didn’t… Night gave way to distant light in the sky, and we found ourselves at the foot of Ditchling Beacon. We split up, with Andy running goat-like up it, while I angrily trudged in gritted silence at a snail’s pace. He was waiting at the top, and I think I just carried on in my own self-pitying way over the fucking fucking fucking flint. I’d hoped to see a glimpse of the sea, or Brighton, or some sense that we were reaching the end of this challenge. As we walked gradually downhill over the broken flint surface, my trail shoes didn’t offer sufficient protection for my broken feet, and every step was purgatory. We knew that we had at least an hour and a half to go, and possibly longer, and every bone in my being wanted to see something to confirm that this was nearly over. After stumbling on flint again, I stopped. Looked around to see if anyone was in sight. And then screamed CUNT at a volume I don’t think I’ve ever reached before or since. Feeling marginally better, we stomped painfully downhill. Thinking, time and time and time again, that this must nearly be over, we realised that the speck in the distance that we’d hoped wasn’t the racecourse was in fact the racecourse. Trudge. Trudge. Trudge. And now the kilometre markers appeared to have vanished – with just the directional signs for company. At the last station, we met a marshal who was vomiting in a way that I though was reserved for cartoons. As Andy relieved himself, I sat and watched magnificent waterfalls of vomit ejected from the poor man’s mouth. He was angry. I was angry. It was ugly. We moved on. Finally, we were on the racecourse. Shuffling painfully through the long, wet grass, we eventually dragged our sorry arses over the finishing line, grabbed a medal, and headed inside to sit down, eat, and have a massage. There was no fanfare. No wide smiles and back-slapping. Just a sense that this was done. Over. Finished. Behind us. Never to be done again.

I’ve written this blog fast-approaching a year after the event. I’m generally in a good mood, and yet writing the above account, I find little in the event to bring a smile, or even lightness to the writing. The organisation and feed stations on this event knock the BHF one into touch. This one is a world better. That said, this one is a lot more expensive. The BHF route is a million miles better. Merging the BHF route and this organisation, I’d probably do it again. 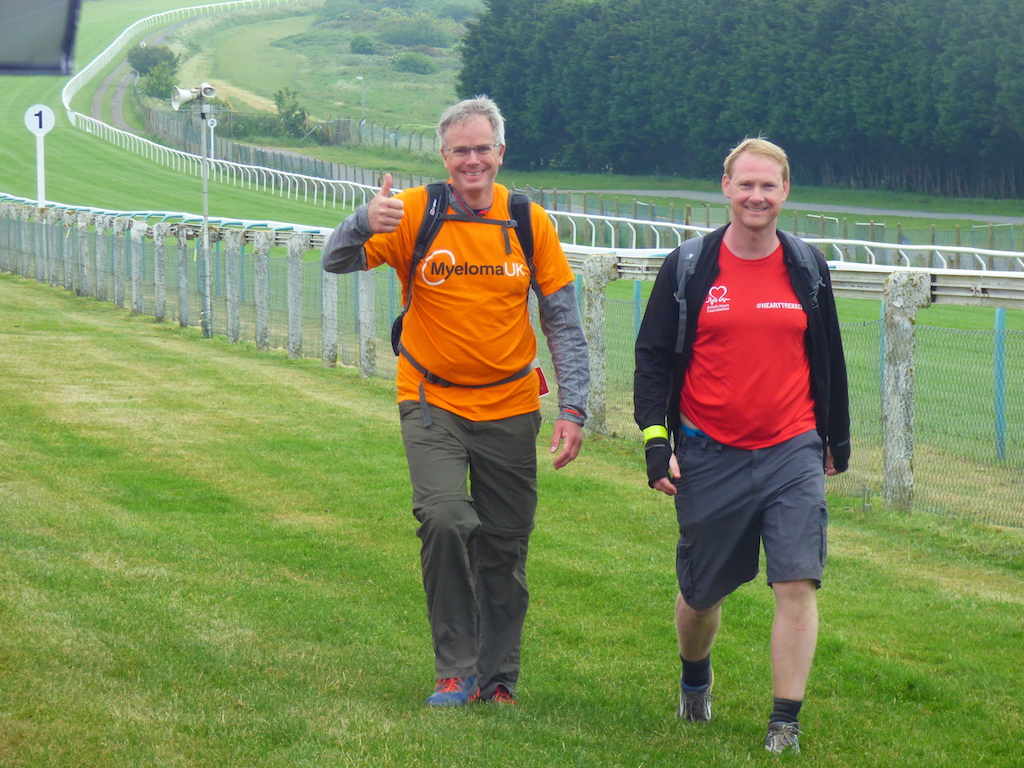