As the 6am alarm called us from deep and restful sleep, we remembered that another day in the saddle was ahead of us.

I opened the curtains of our 2nd story room. The morning sun and lack of obvious wind was a welcome relief, however Coquelle remained only modestly successful when it came to views. I closed the curtains to keep out the view, choosing to think we were overlooking Lake Como (yes, I know that’s Italy!) Breakfast was a typically French affair, which is to say in my view, lacking everything that should be present in a breakfast, such as sausage, egg, beans, toast, mushrooms and hash browns. I can’t see me sloping off to the Godalming cafe at 8am on a Friday for cheese and croissants. 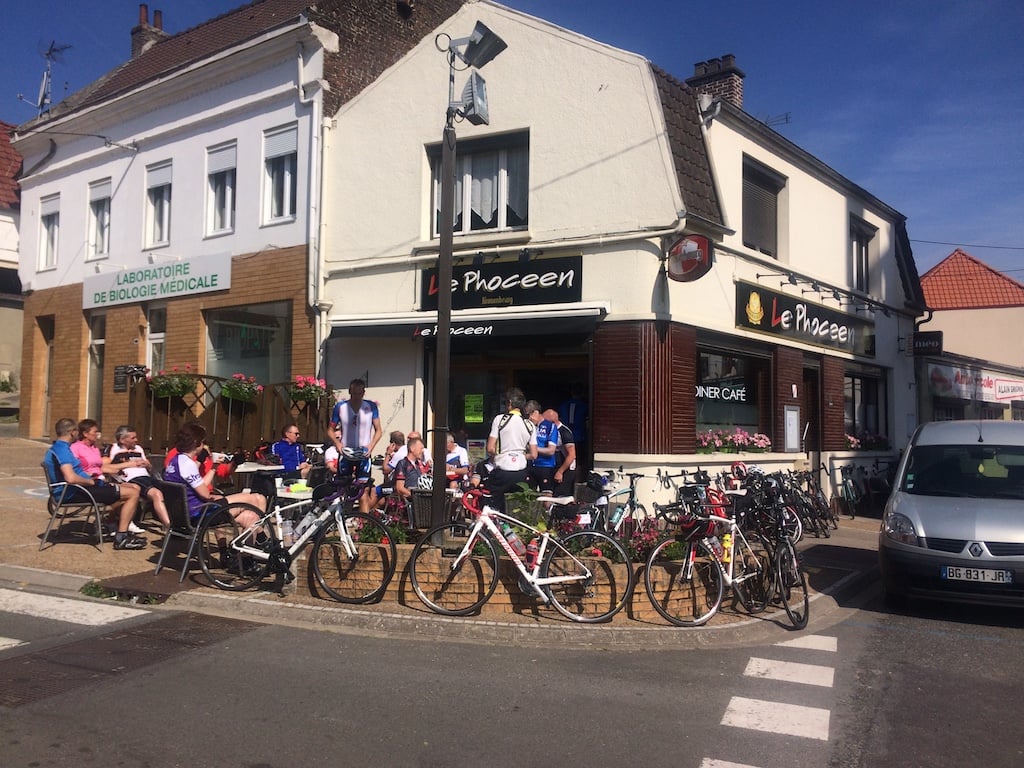 After an 8am departure, the morning riding was flat along canals, which meant our legs could wake up. They could wake up, but chose not to, which was rude and we found ourselves being overtaken by almost everyone, including pensioners on the French equivalent of Boris bikes. The first roundabouts were lively affairs.

The sun was on our backs as we bimbled gently along. After a water stop in a forest, at mid-morning we stopped in Lumbres at a Tabac for coffee and cake. By now, the weather was glorious, with a deep blue sky, and group after group of cyclists careered to a stop at the Tabac as we flooded this small business with requests for “Duh caffay o lay”. It was a remarkably nice way to travel.

The day drew on, the weather hotter, the hills longer and more rolling, and the head-wind stronger. Lunch came a little late, and we were all grateful to rest our hot legs and to refuel. To start with, the head-wind that was light relative to the first day was a relief from the heat, but several hours in, it started to take its toll. All things considered, the cycling was an absolute joy, and I’d have felt guilty to have had my trip paid for by sponsorship on a day like this. It was stunning.

As the afternoon wore on, the temperature rose, and we were cycling in the high 20s Celsius. It was preferable to yesterday, but pretty warm nonetheless. The views remained glorious, with rolling farmland, small villages, empty roads and wide vistas alternated with forests and rivers. We spent much of the day cycling side by side chatting, and greeting locals and others in our group. It was just how it should be.

The day drew on, and Arras never seemed to get closer – it was almost mirage like. We passed the first war cemetery, which was a salutary prelude to the day to come.

The Arras mayor had decreed that no orange arrows could be put up in his town, so we received verbal directions from the outskirts of town to the hotel, which were comically deficient. We got utterly lost, and when we did arrive at the hotel, Jen did a spectacular clipped-in face-plant in the middle of a large intersection! To be fair, I did the exact same thing in the exact same town 4 years ago, except I fell at the feet of a surprised French octogenarian woman who I’d been asking directions from.

We went for dinner in Arras, sat on thick cushions, quaffed unpronounceable beer and ate a giant steak. Good times.