This is my account of cycling from London to Paris in 2015, raising funds for Macmillan Cancer Support, including angry farmers, meeting characters from Black Adder, and the final adrenalin fuelled dash through Paris to the Eiffel Tower.

The reason for taking part in the London to Paris ride was motivated by two very different but connected drivers. Firstly my Mum passed away some years ago having lost her fight with cancer. Secondly I thrive on challenge and wanted to take part in event with my wife, so the decision was made.

July had arrived, the training was done, and the only thing that stood between us and croissants in the shadow of the Eiffel Tower was just shy of 500Km of bike riding.

It was an early start, with a 5am alarm, which was about 2 hours too early. We peeled back the curtains to see what the weather was offering, which was typically Autumnal… Breakfast at 5:30 was marked by lots of anxious people trying to force down some calories, and a mixture of excitement and trepidation about what lay before them. We were outside for registration at 6:30, with people huddled in a wide variety of lycra and layers. There was no consensus as to what the right clothing was.

After a quick set of instructions, at 7am we had our Grand Depart from Blackheath. 150m later 76 people caused chaos on the first roundabout, with people yelling “Stopping” accompanied by the popcorn popping sound of 76 people un-clicking their cleats from their pedals. 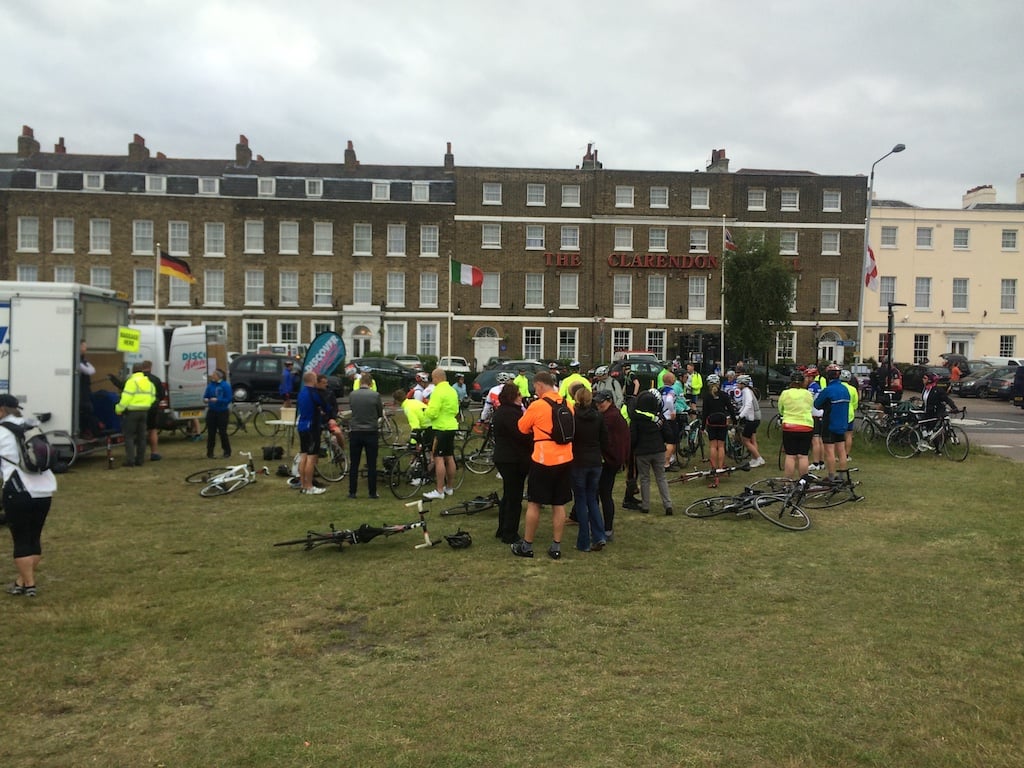 The group quickly fragmented as Shooters Hill split the peloton and as we reached various sets of traffic lights. We made our way through the outskirts of South London, which would have looked better in the dark. Jen and I were in the first third of the group, happy to be out of the way of the main throng, and the potential for accidents that accompany this number of riders cycling while mostly asleep.

At the first water stop at a sports centre, we were wringing wet, not from rain, but from sweat under our non-breathable lightweight rain tops. We dispensed with the rain tops, and started to set the clothing pattern for the day – which was generally being dry and too cold, or too hot and sweaty.

We got to “lunch” at 10:45 after an uneventful but pleasant ride, arriving within the first 15 or so people, to find a village hall colder inside than out. Coffee was served at about 11:30, and food finally at noon. The caterers had got lost, so it was a long stop, during which warm muscles cooled down, as did our core temperatures.

We pushed on further into Kent, near the front of the group of 76 riders. The weather was dry, but increasingly chilly, and we only had light clothes with us. The wind from the South continued to strengthen, alternating from direct head-wind to gusting cross-wind.

Kent gradually went from gently undulating, to seriously fricking hilly, and what had been a strong but blustery wind from the South became stronger and sustained – steady at 20mph, regularly gusting to 30mph+

I found myself at the front of the group, attacking the hills, and winning against them. Hill after hill was vanquished!

At the last feed station, and with only 15 miles til we reached Dover, Jen and I left ahead of the group, as we were getting cold waiting. When I’d done this ride 4 years ago, I’d arrived into Dover first, and oddly found myself unintentionally about to do the same again.

We pushed on into the headwind, determined by now to hit the ferry terminal first.

At about the 115km mark, the orange arrows that mark the way disappeared, and we became anxious that we’d missed one, but knew we hadn’t. We asked a number of locals where we were, and how to get to Dover. We chose badly for help (my favourite was the toothless crone, straight out of Blackadder, who tested my ability to bellow increasingly simple questions). Seemingly, no-one knew the way to Dover, so we resorted to my bike computer, which kindly selected a new and almost vertical set of alternately short and long climbs. By this time, Jen was tiring and my bonhomie had been left in a hedge somewhere.

An hour into our lost-ness, we rang the organiser to explain our plight. His interest matched Jens energy, and he helpfully suggested Google Maps (no data) or cycling til we found Dover (thanks).

We re-found the route in the end, and piled into Dover. More or less last. Knackered. Wondering what the f..k had happened to the signage.

It turned out a farmer had removed the arrow, it had been reinstated, and he’d removed it again. I imagine he’s a true gent when he’s not being a total arse. It was an hour’s detour, and 17km extra we didn’t need.

The ferry crossing was uneventful, and we cycled through Calais to Coquelles, arriving at our hotel at about 21:15. I dispensed with the idea of a shower, and sat antisocially stinkily in the bar with my first true Kronenborg. It didn’t last long. In fact, it took longer to order it than to drink it. So I had a second, which was similarly short-lived. The third did better.

I smelt like a camels armpit, couldn’t easily sit down, and concluded that “Coquelle” loosely translates to “backside”.