Just for a change, the day started with a 6am alarm call. A glance outside showed a day that promised both rain and wind in biblical quantities.

As we gathered outside, sustained for the day’s riding by a hearty feast of cheese and bread, we were briefed that 10 miles up the road, there was something approaching apocalyptically bad weather, and if we weren’t hypothermic by the end of the day, we should consider ourselves lucky.

We all peeled on varying styles and colours of waterproofs, before heading out of town towards farmland. 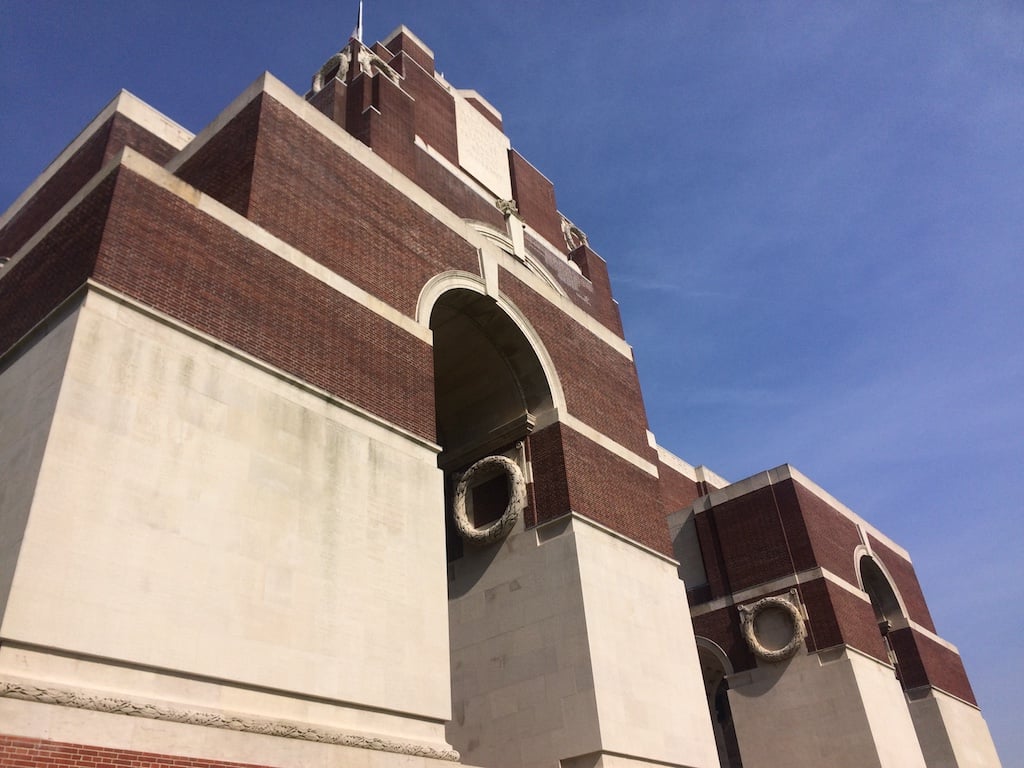 As we were settling into a riding rhythm, the product of the rain became apparent, as we hit a section of road that had turned into a sea of liquid mud, or liquid muck. Either way, we all got to wear it. It may well have been mud, but something smelled, and it was either the “mud”, the crops or the cumulative impact of 2 days of cheese and energy gels on our digestive systems.

The sky looked foreboding, but the rain had passed, and the roads quickly dried.

We were now in the Somme region, and started picking up signs for cemeteries, before arriving at Thiepval for our morning water stop. Thiepval cemetery needs little introduction, other than to say that it is truly beautifully maintained, and is an enduring and moving tribute to the massive loss of life in the Great War. A place for quiet contemplation for the fallen, and maybe a few tears.

We rolled out of Thiepval at about 11am in what was now 27c heat, and a constant headwind.

The riding was good, but we increasingly found ourselves cycling in line, rather than abreast, to give some respite to each other from the wind. The hills kept coming, with long drags up, followed by long, fast descents. The heat was sapping. The headwind was sapping. The cumulative effect of 2.5 days cycling was sapping.

We reached lunch in a small wooded picnic stop, and the impact of the conditions on people was marked, with everyone talking about the heat and the wind. A good few people looked drained and overheated.

The heat grew, and it was now over 32c. We pushed on, with the landscape increasingly open, and the wind stronger and hotter than ever. Going forwards was tough, and managing our water consumption was an issue. We made it to the afternoon water stop by a lake, and I’d felt sick for the previous hour. These times were about truly earning the sponsorship.

We made our way towards Compiegne over continuous open hills in the heat and wind, with little more now than gritted determination keeping us going. The journey through Compiegne was tortuous, as it was several miles from the outskirts of Compiegne through the industrial centre, and out towards the next town.

It was Friday night rush hour, we were completely spent, and I felt really ill. As we waited at one particularly fast and dangerous roundabout, I felt myself being pushed out into the speeding traffic. A motorist behind me was on her phone, looking to her left for a gap in the traffic, while I was in front of her front right wing. She was pushing me into the traffic with her bumper. Had she seen a space, and gunned her engine, I’m not sure what would have happened. A knackered bike certainly. Possibly worse.

Physical inspections revealed conditions normally reserved for “Ripley’s Believe it or Not”.

On Day 4, we career through Paris, around L’arc de Triomphe and arrive at the Eiffel Tower.