On the walk itself, at 2am when others will be safely tucked up in bed, and assuming things between 8am and 2am have gone to plan, three things are set to happen at once on the walk.

These three things are:

Firstly, it should be fully dark.

Thirdly we’ll get to the lower slopes of the South Downs.

Now, on their own, each of these things would present no problem. I’m not afraid of the dark, and walking up the South Downs would normally be nothing more than gently strenuous – hardly exactly summiting Everest. But walking up a hill, in the dark, and absolutely cream-crackered using a head-torch for the first time wasn’t something I decided a smart thing to do. So, with about as much enthusiasm as I had for my Mum’s funeral, I set about planning a night walk.

I procrastinated. I dithered. I found many other things I should do other than walk in the countryside on my own in the middle of the night with a torch strapped to my head. Evening ironing managed to hold off the inevitable for a day, but inevitable it was.

I considered my options before setting out. I decided to choose a route that would avoid people to every extent possible. The last thing I wanted to do was to stumble across star struck lovers entwined in a passionate embrace at a local beauty spot.

I opted to walk from Cranleigh to Baynards Hill. It would, I figured, be deserted and I knew the walk. I set off, dressed overtly as a wholesome rambler, from Cranleigh amidst what could easily be described as an idiot convention. I cleared the throng, and hit the trail into descending gloom. I knew the way and the distance, but it didn’t stop me being mildly apprehensive. So far as I knew, there were no reports of murderers targeting the old Guildford to Horsham railway line, but then they have to strike for a first time. What better night for it?

As the last vestiges of purple light struggled to penetrate the overhead canopy of trees, I spotted two people approaching me without torches. “Oh good” I thought to myself, “they’re either going to kill me, mug me or think I’m a serial killer”. As they approached, their happy chat subsided, and they awkwardly greeted me. I suspect they wanted to form an emotional connection with their would-be captor in order to lessen the likelihood of an unpleasant death. I’m sure their pace quickened as they passed me, and if you said they’d broken into a run, I wouldn’t doubt you. 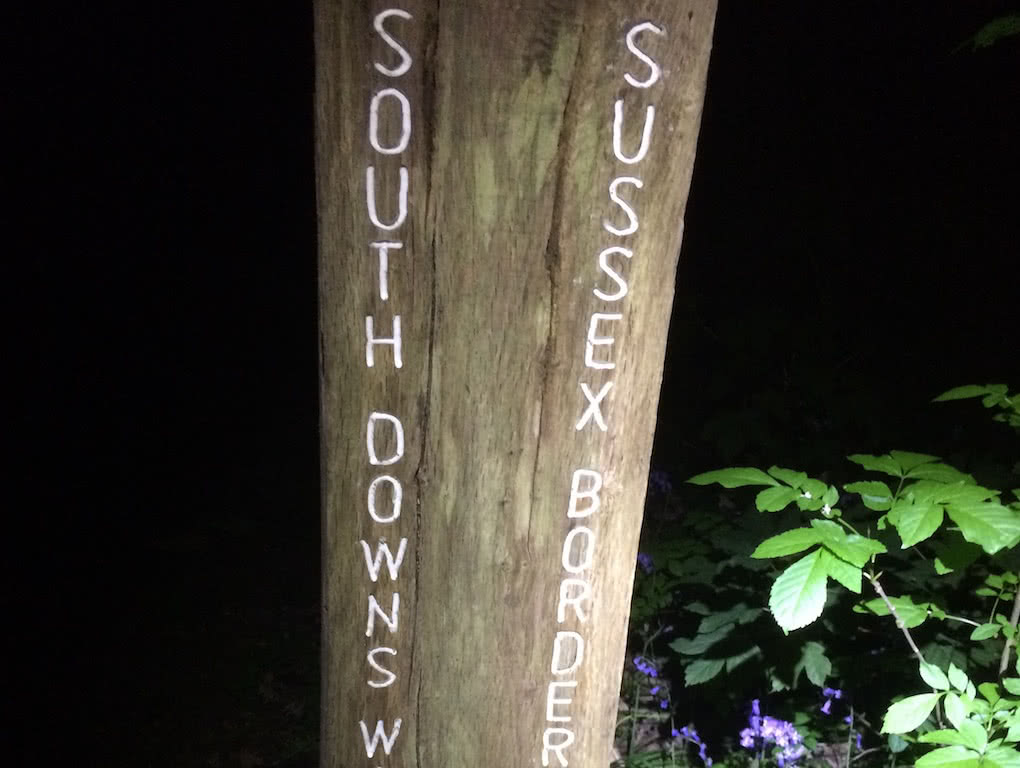 With barely 5m of visibility in front of me, I donned my Black Diamond head-torch (money VERY well spent), and fired it up. Quite why I felt mildly self-conscious is a total mystery to me, given the total isolation I now enjoyed, but there you go.

“Thud” went the first moth. “Flick” went the second. “Swoop” went a bat. Being the sole light source this deep in the Surrey countryside had turned me into a major destination for the local wildlife.

I plodded on, enjoying the new experience of walking like this, seeing how 3 dimensional things looked, and spotting varied wildlife. Oh, and continually being happy to not have been mugged.

Several times, I tried my “red light” mode, which meant switching off the white light, and enabling the red. I don’t know, but with 2 small red dots of light shining from the dark, I imagine I looked like a scene from Hannibal, or an opportunistic rural “companion”. Neither being a good look. I went back to “gentle nutter” mode.

A degree of boredom set in, and I found “Indiana Jones” on a loop in my head. I pondered listening to music, but decided that if I was to be clubbed across the back of the head, I at least wanted to hear the frenzied approach of my assailant. So my music stayed off.

Where I could see the sky, and with zero light pollution, the star show was unbelievable. I saw the eyes of many nocturnal animals, numerous bats, an enormous deer (Andy would have hidden behind me), and best of all, a tawny owl that landed in a tree no more than 6 feet above me, and which peered down at me with a look that combined puzzlement and pity.

My night-time ramble finished up at 22:30, and won’t be repeated until the walk itself.

With training completely on track, thoughts increasingly turned to Packing, what we’d carry, and what we’d have to leave behind.