After some initial, shortish walks, and with boots I felt comfortable in, I decided to test myself a little more. Some fairly basic route planning left me with the plan to walk from Cranleigh, through the Surrey and West Sussex countryside to Christ’s Hospital. Not to the school, but to the railway station. The station is less glamorous, but has no uniform policy. It’s also free, and I like free.

After an early morning open water swim, and a nourishing coffee and croissant for breakfast, I loaded my small rucksack with some essentials, and set off for Cranleigh.

LESSON: COFFEE AND A CROISSANT MAY BE ENOUGH FOR A PARISIAN PAVEMENT BREAKFAST, BUT IT DOESN’T REPLENISH 1.6KM OF OPEN WATER SWIMMING

The weather was set fair, I had a spring in my step, a full iPhone battery, 2 rounds of sandwiches and crisps. I set Strava running, and headed into the countryside.

The miles, or Kms, rolled by easily, and I enjoyed the feeling of being outside listening to the birds and drinking in the views as they passed slowly by. I ate the rest of my breakfast at about 10am – a ham and salad sandwich – and tootled along.

As I walked, and being a Saturday, the trail was busy with other walkers. This in itself created an oddly British conundrum. Or maybe it’s just me being socially awkward. Either way, as you walk towards walkers coming the other direction, there will be a point at which you exchange a cheery “Mornin’”, “Hi” or “Afternoon”. Traditionally this is accompanied by some eye contact. So, at what point do you make eye contact, and before you reach this point, where do you look? At the ground? At the sky? The trees? Or do you fixedly gaze into their eyes from 1,000m out? I tried various options (it was a slow day) before settling on a point slightly to the side of their left or right shoulder, before making the necessary eye contact. It seemed to work, and no-one obviously side-stepped me. 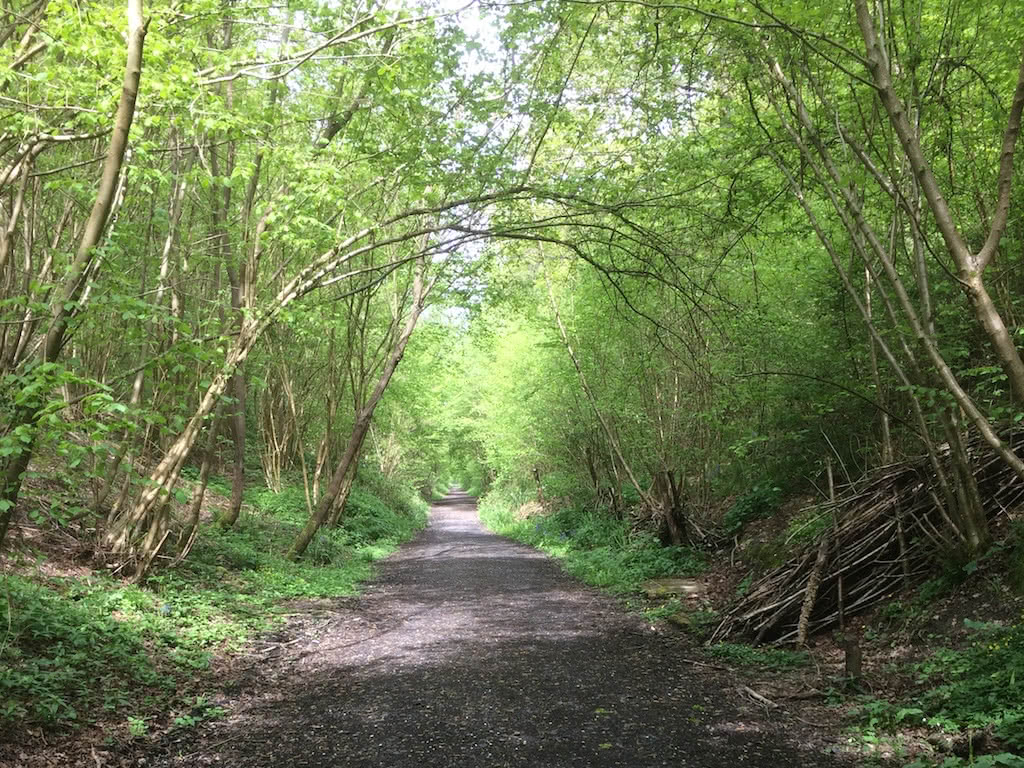 The walk to Christ’s Hospital was uneventful. I wouldn’t go so far as to say “boring”, but it gave me ample time to reflect on how pitifully slow walking is as a way of getting places. As I occasionally saw the Wey and Arun Canal, I also gave thought to the fact that I was travelling faster than a narrow boat. This could seem a random thought, however I own a 60ft narrow boat (Roman Valley), and most days aboard her have been mostly slow, but each has involved at least 90 seconds of terror. Today, happily, did not involve wading waist deep in the Avon trying to jemmy a 12 tonne boat off a mud bank with a plank, nearly slicing the dog in half, hair-raising downstream travels on a river in flood, nearly shooting weirs sideways or exploding ticks. So, by that measure, today was already a success.

With a happy heart, and 16Km under my walking boots, I reached Christ’s Hospital station, and settled into lunch of an egg sandwich, a sugary drink and a bag of cheese and onion crisps. Hearty food to replace 2 ½ hours of brisk walking.

20 minutes later I set off. I’d have stayed longer, but it’s not exactly a beauty spot.

As the Kms re-tracing my steps started to add up, I could feel my shoulders starting to droop, my pace dropping and a growing desire that I was at home with a cup of tea. I started to feel less than fantastic. My legs were tired, but more than that, my stomach was growling and a felt mildly dizzy. I self-diagnosed that I was hungry and probably dehydrated. Not too soon, I arrived in Rudgewick, and legged it into the Co-Op to see what sports fuel they could sell me. I examined the fruit. I perused the chicken breasts. I toyed with the idea of flapjacks. More sandwiches might be good. I left with a Lucozade and a Twister ice cream.

I sat in the sun, legs out-stretched and re-fuelled. Life was good wasn’t it?

LESSON: TWISTERS ARE NOT ENDURANCE FOOD.

I hit the trail again, and soon found myself at the foot of Baynards Hill. Baynards is the only place on the railway line where they felt the need for a tunnel (which is 381m long), so the hill is lumpy. I’d seen someone else running up and down it the week before, so 25Km and 4 hours into my walk, I secured my pack, and ran Rocky-esque up it, marvelling at how good it felt to be moving quickly and athletically. As I summited, both my ham strings immediately started playing their own loud tune, complaining about the change in pace, which at least replaced Indiana Jones, but heralded quite a lot of pain.

I settled into a sad hobble down the hill, contenting myself with Wine Gums and Spotify, eventually getting back to Cranleigh feeling like a bit of a plank to be honest. I’d clocked 30Km, so was determined to get to 33KM, being 1/3 of the distance we’d be doing for real, and over 20miles. This final 3Km needed an extra surge of sugar, and a cardio playlist, which had me strutting the last Km or so looking like a cross between the Hoffmeister Bear, and someone who’d come off their meds against advice.