So, probably not the most exciting thing in the world, but quite likely the one that will have the biggest impact on the day is getting packing right.

We discussed the inventory as a team. None of us wanted to carry an enormous pack for the whole distance, while relying on meeting friends or family at points along the way carries the risk that they’re missed, and that as a result whatever they were carrying never gets to us.

We also discussed carrying stuff until it had served its purpose, and then (considerately) throwing things away en route. Images of us walking onto Brighton beach, much like Reggie Perrin throwing off the last vestiges of clothing before walking into the sea, floated past my mind as we pondered this option. Maybe not… 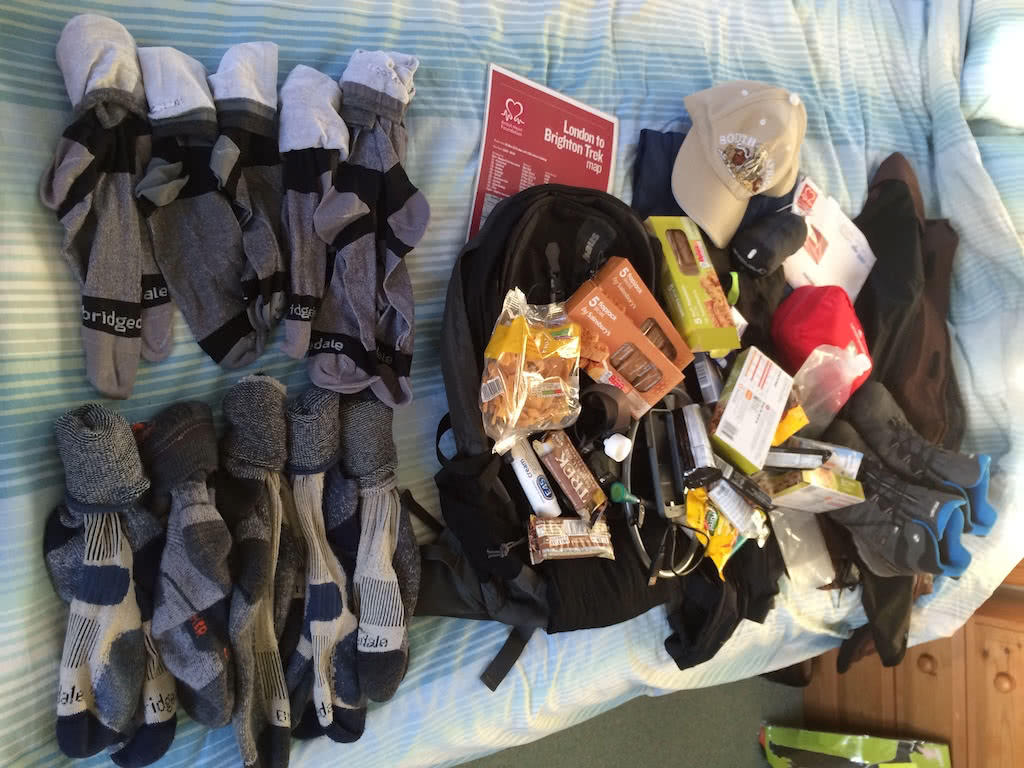 The packing broke down into:

Packing for an entire day and night, and preparing for a range of weather conditions during the day, coupled with the expected drop in temperatures overnight in such a way as to be accommodated in a relatively modest rucksack is not easy. At least, it’s not easy planning it the first time you’ve done it. None of us wanted to emulate the Paras as they yomped across the Falkland Islands with 50-70Kg of kit in their bergens.

Below is our first stab at what we’re going to carry.

It doesn’t really look much, but the clothing bulks up the packing, and DC had recommended that we didn’t go over a 30L pack. 30Ls eh? This got me thinking about stowing a cheeky beer or two, or possibly filling my Camelbak with lager. How would the taste of a Saturday night beer compare against the work of carrying it 60Km? There’s only one way to find out, but popping in to the Richard Onslow in Cranleigh for a sharpener probably makes more sense.

The one item that hasn’t made the list (yet) is walking poles. I’ve read that they could reduce the strain on hips and knees by as much as 30%, by making the walking both an upper and lower body exercise. 30% is a shed-load of effort over the distance, but on what is nearly 98Km of flat, and probably only a small number of Km of “ups”, would they be needed? Additionally, and vanity shouldn’t come into it, they’re pretty aging. I don’t need aging much more to be fair, so adding a few years by carrying walking poles didn’t enthuse me.

The counter-balancing argument in favour of poles was weaponry – either to defend ourselves against wildlife (are you listening Andy?), or if we fell out with each other, and a swift but painful end was in order for someone (that will be DC if you’re wondering).

Oddly, a preoccupation of mine is iPhone battery power. I want to run Strava for the duration of the walk. I won’t lie. It’s vanity. If I’m going to doing something as monumentally daft and painful as walk over 100Km in 24 hours, I want there to be a record of it. I also want to Tweet and Facebook progress. I might even make phone calls. (Hopefully not to report a murder). I’ll certainly listen to Spotify. So, how many battery cases to take? One? Two? Get it wrong, and either Strava is cut short or I’m carrying pointless weight.