The Surrey Scholar and the Star Inn 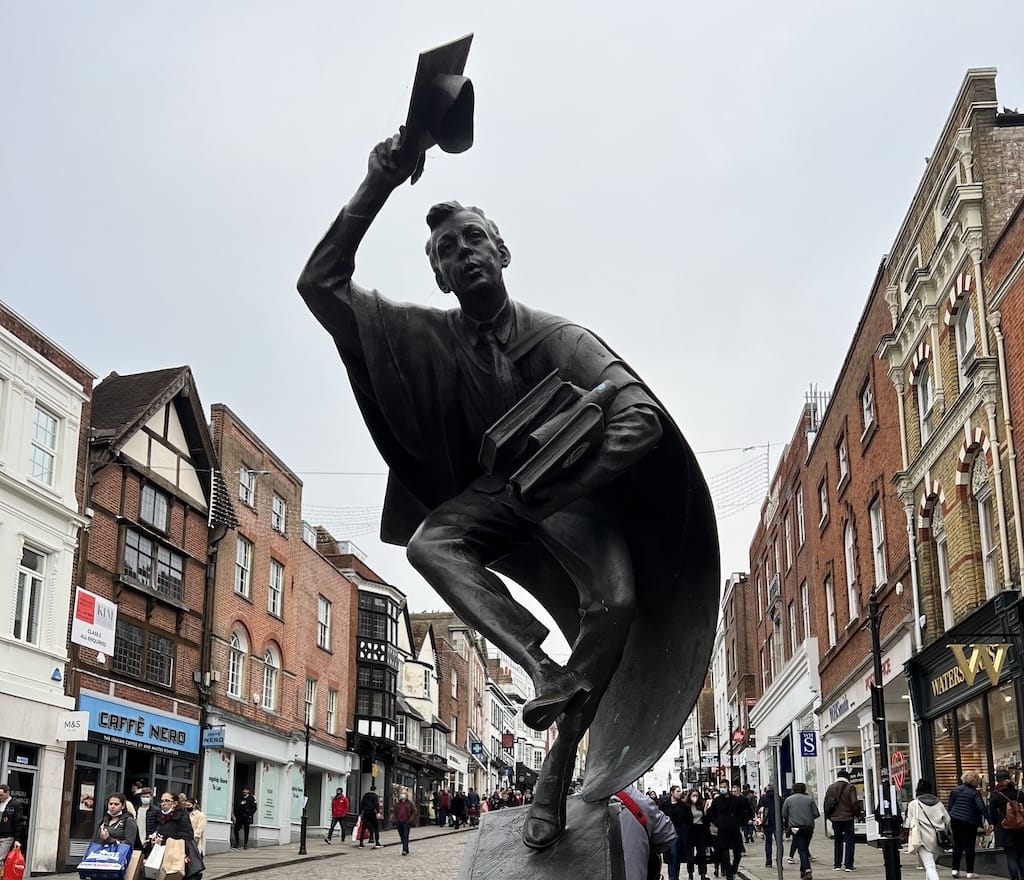 Located at the junction of High Street and Quarry Street, the Surrey Scholar is a steel structure that was commissioned by the University of Surrey, with the brief that it should be original, figurative, dynamic, and contemporary. Created by artist Allan Sly, it was unveiled May 2002.

Standing at 11 feet tall, balanced on one toe, mortar board in one hand, and gown flowing behind, the finished piece has an air of movement and energy, and is routinely used as a backdrop by buskers and street artists. This use ties in nicely with the inscription on the plinth that talks about “culture and scholarship”.

Before moving on, it’s worth casting an eye at the surface of the High Street above the Surrey Scholar. At first glance, you might be mistaken for thinking that you’re looking at cobbles. In fact, they are granite setts – laid in 1868 under the watchful gaze of Henry Peak – Guildford’s first Borough Surveyor (there’s more about him later). The setts were designed to provide horses hooves additional purchase, or grip.

It’s not going to take a genius to spot the first destination on this trail, but for completeness, let’s start as we mean to go on:

Facing down the High Street, and with the Surrey Scholar behind you, The Star Inn is in front and to the left of you. Being mindful of traffic, cross Quarry Street to The Star.

If you’ve been in it, you’ll know that it’s fantastically characterful inside. At the back is a large live music venue (called “The Back Room”), and you’ll see a plaque that notes that The Stranglers (originally known as The Guildford Stranglers) played their first gig here in 1974.

The building itself dates to around 1600, and records show that there’s been a pub here since 1723 – having had a very varied history since that time. A sign of the front of the pub succinctly describes the history of this building, so in the interests of moving things along, I’ll leave you to have a read.

When there’s no pandemic, twelfth night brings the centuries old tradition of wassailing to The Star (and several other pubs). The Pilgrim Morris Men celebrate Twelfth Night every year with a traditional Wassail to round off the festive season. They tour the towns hostelries singing traditional carols, performing the Guildford Mummers Play and generously passing round the wassail bowl under the auspices of the King of Misrule. At each pub, chalk cross marks are made on the beams called apotropaic marks – one of the rituals of the night, and the marks are made to bring good luck and to prevent the entrance of evil spirits. The evening begins at The Star followed by the Kings Head, The Keep, The Angel Hotel, The Three Pigeons, and finally the Royal Oak. It’s a wonderful experience.

While stood near the Star, cast your eyes at the buildings around you. Several of them have the over-hanging first floor – known as “jetty”. There are various reasons for utilising this architectural detail – though no single reason is definitive.

Looking across the High Street you’ll see the entrance to a shopping centre. Inside, above the doorway, you’ll see a large white lion – being a nod to the White Lion Inn, a coaching inn which was knocked down in 1957 to make way for a branch of Woolworths.

Being half-way between London and the South-Coast, Guildford developed a deep tradition as a stopping off point, and as a result had several major coaching inns, the most notable being The White Lion, The Angel Hotel, The Crown, The White Hart, The Lion, and the George Inn. The only one that now remains is the Angel, which we get to later.

Cross over the High Street (so that you are on the same side as White Lion walk) and head down the High Street. About 100m down, turn right onto Friary Street, and after about 150m you’ll reach Friary Passage on your left. Pause here a moment.