Nowt so unpredictable as bees

Another eventful day in the apiary that saw us disassembling our hive by torchlight, and sweeping 10,000 or so sleepy bees into our hive in the full dark by the light of an iPhone.

Nowt so unpredictable as bees

After our recent swarm fun and games, we assumed (and, yes, it does make an ass out of me and Jen) that we’d have a tranquil, if not honey-full, season. Ha. No such luck! On Monday I returned from B&Q only to hear Jen say “Ed!” in a tone that inferred that we were unexpectedly expecting our 3rd child, or the girls were having a moment. Being confident that parenting a new-born wasn’t on our Bucket List, I looked towards the apiary. A dizzying number of bees were swirling in the air above the hives. Hooray! We called Ollie and wandered up the garden in inquisitively resigned fashion. We watched as some unknown number of bees (maybe 10,000 – 20,000) flew in happy circles. Realising that we know absolutely zip about our bees, it seemed that this was likely to be their pre-departure rallying flight, and they’d soon take off over a fence to a destination unknown. Not having the ability to speak “bee” and not having giant butterfly nets there was nothing to do but enjoy the experience. We WhatsApped and rang our various and understanding neighbours so that they could enjoy the spectacle. Figuring I could learn something, and be part of the event, I suited up, and went into the apiary. 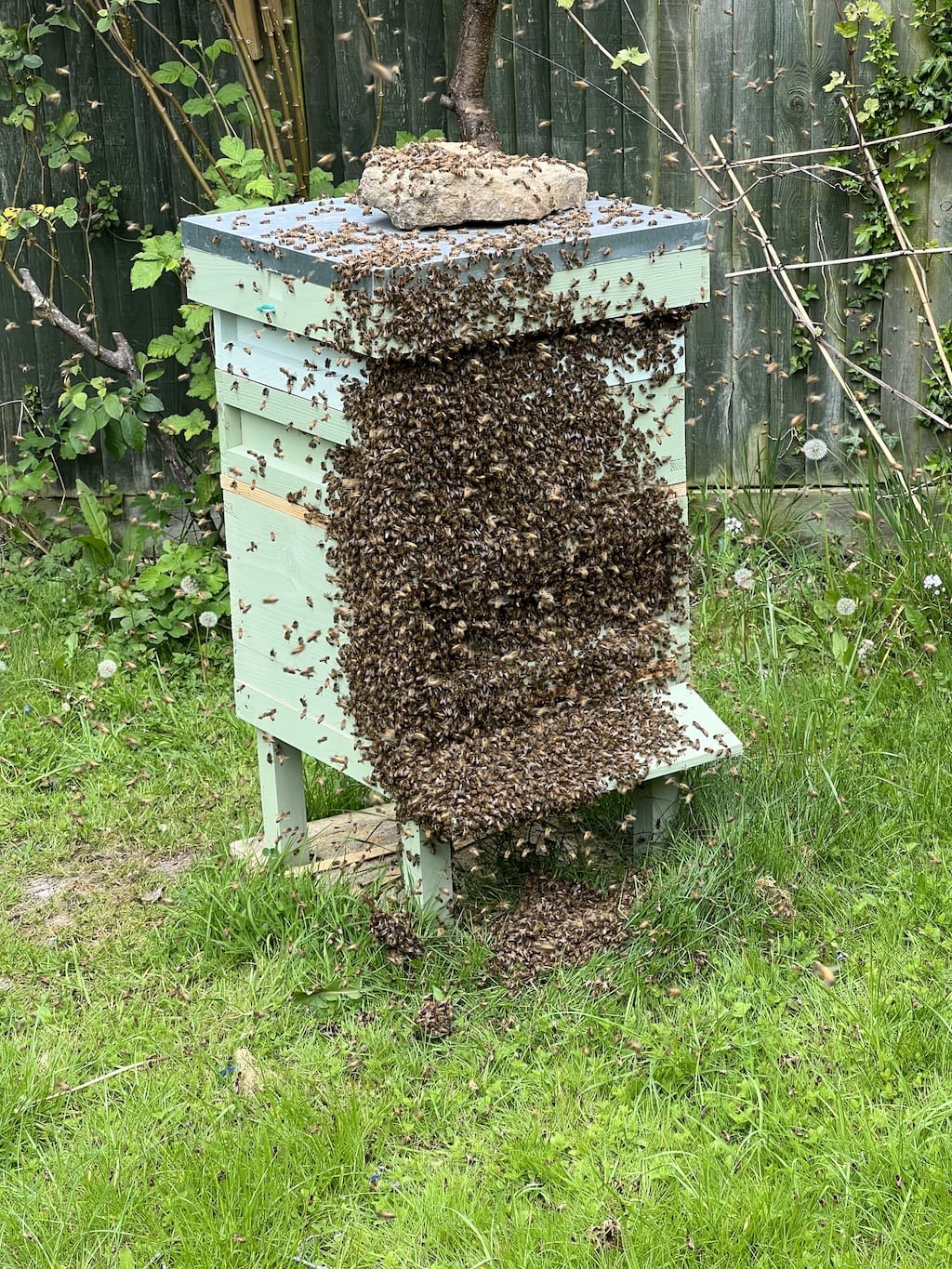 Being suited in the apiary with quite so much going on is a fab experience. During a lively inspection you might get a few hundred bees in the air around you, and they’re not happy. With several thousand giddily happy bees all celebrating their adventure, the atmosphere is very different, and nicely so. Far from consolidating in the sky (signalling departure), or settling on a nearby structure (signalling swarm), the girls appeared to be settling on the hive – which changed the game. With neighbours now arriving in numbers, and my bee-related stress levels rising rapidly I went into abrupt organising mode. “Jen – we need to work out what to do. We can’t do that while we’re making a nature documentary with the neighbours.” Not a line I’m massively proud of… “How’s it going?” came the friendly enquiry over the fence from our most affected neighbours. “It’s been better” I acerbically replied. Winning hearts and minds today Ed… We now had a bearded hive, which gave us time to think. 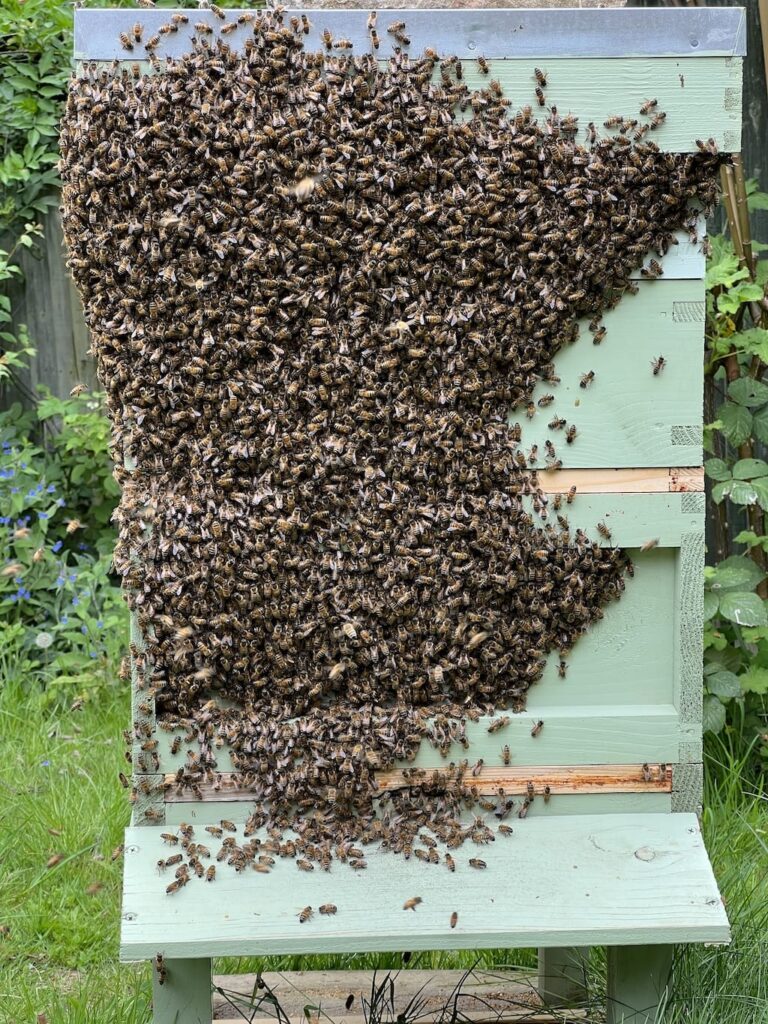 We dropped a message into our Beek WhatsApp group to see what advice we could garner, and we sat and enjoyed our bees. It truly was a joy to be sat or kneeling no more than a foot from 10,000 or so settled bees. It presented ample opportunity for photographing and videoing them. What became apparent was that they were returning into the hive. Not quite at the same rate as an Easy Jet plane boarding, but solid progress none-the-less. Over the next couple of hours we were offered various advice that what we were witnessing was either: (a) a welcome home celebration for our newly royally shagged queen (they mate 7+ times on the wing with different drones over a few minutes); or (b) a cast swarm performed by our virgin queen By 7pm half of the “swarm” had returned to the warmth of the hive. With no clear plan of action open to us, we went out for dinner, hoping that the remainder of the gang would have been seduced by the pheromones in the hive, and the prospect of warmth and companionship. This was more hope than expectation. Even with our novice understanding of bee behaviour, there was little to suggest that they’d get a wriggle on and bunk down for the night. Getting home just before 9pm we got the answer we didn’t want: 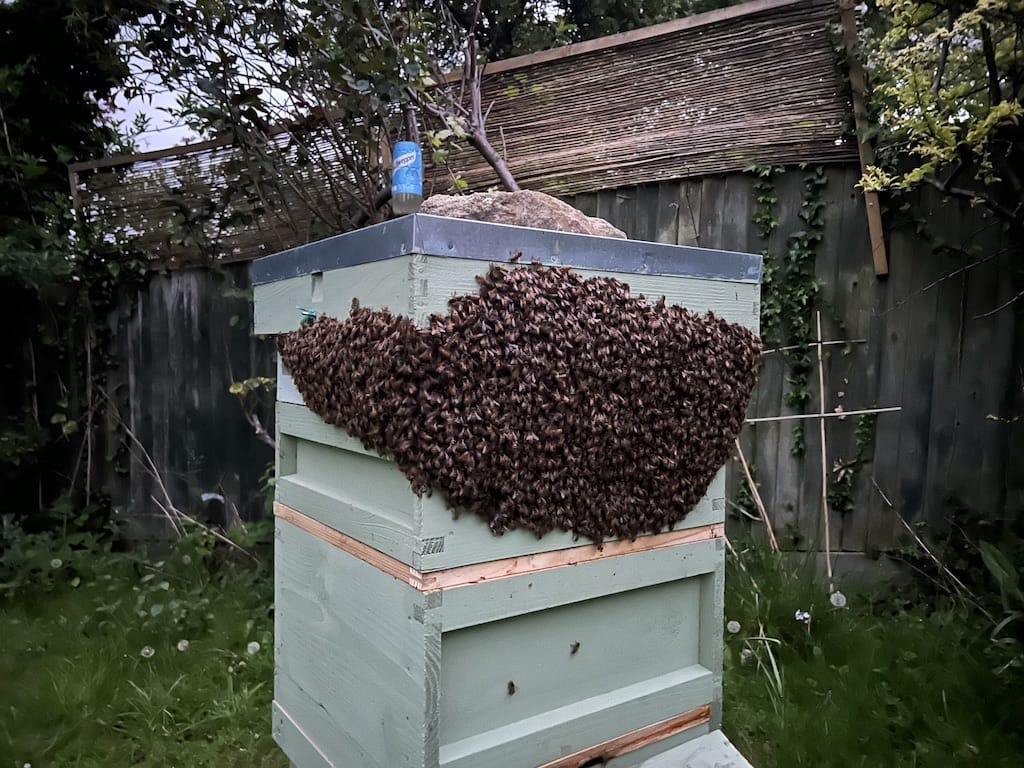 The thing about the iPhone is that it has a remarkably capable night-time camera, and so the photo above doesn’t reveal the fact that it’s basically full-dark. Ideal conditions for bee-keeping. We had to do something. As we suited up, I dropped another message into our ever tolerant bee-keeping WhatsApp group. Would such a large number of bees, who clearly were settled for the night, survive the overnight chill? What should we do? The first reply, which came through reassuringly quickly, was that we should slide the 2 supers and queen excluder backwards, and sweep the bees down into the brood box. That made sense! Game on! We entered the apiary with the light from my iPhone. Shining the light on the bees resulted in an amazing shudder and rustle as they collectively reacted to the light and disturbance. I cracked the hive, pulled the supers back, and Jen “shushed” the first tranche of bees into the top of the brood box. The flaw in our plan was instantly revealed as, in our haste to hang on to the last vestige of light, we hadn’t lit the smoker. What we had now done was create a mound of bees on the top of the brood box, and an almost equal fog of flying and pissed off girls. Yay! Jen lit the smoker. Not an easy task in the dark. In a bee suit. With a veil covered in upset bees. In a panic. With the smoker somewhat lit, Jen smoked them down into the brood box, and we then swept as many bees as we could into the hive. If you’ve ever watched “I’m a Celebrity” and watched the contestant put their hand into a container with an unknown creepy-crawly, this is similar. Putting your hand into a mass of living creatures that collectively make you very ill is an alien concept. We were both now wearing huge numbers of bees, and I could feel one inside my gauntlet. Maybe it wanted to be warm? With the smoker now resolutely un-lit, further attempts to smoke the now bewildered (and possibly laughing) bees into their home was ineffective – simply puffing chill night air at them. Fuck it. We reassembled the hive, and escorted a substantial number of the bees down the garden on our suits.

When we were finally out of our suits, we looked at WhatsApp. A very experienced bee-keeper had suggested that what we were experiencing might be an “inbound swarm” – not something we’ve ever heard of. That would suggest that there was a queen on the outside of the hive – which we’ve swept into the hive. Fuuuuuck. Depending on what’s happened, we may soon have: We won’t know the outcome until something happens, which will either be more bee chicanery, or a bit of peace and quiet. Life’s never dull in the apiary. It would be nice if it was.
previousBloody bees
nextBee street party