Having steadied the ship a little, we were hoping for some smoother waters, fewer decisions to make, and maybe a little honey to round off the season. Maybe things would be a little more settled?

To recap – we have two colonies. Holly has historically been our problem child, while Ivy has generally been more successful and settled. Would this pattern continue now that both colonies had swarmed, and we had fresh bee DNA in the apiary?

At the end of the last article, with both swarms fresh in mind, disease and/ or wax moth prevalent, and Holly lacking eggs, lacking brood and a lacking a queen, but with plenty of queen-cells appearing, things did not seem to be going very well. It wasn’t a chore, but it wasn’t the sun-dappled, stress-free, shared learning experience that we had hoped it might be!

Ivy now appeared to be progressing well, with eggs, larvae at all stages, sealed brood, a healthy super of honey,  and little sign of any disease or infestation. At some point in this period we learned that we should not routinely leave the varroa board on, as this provided a handy resting place for young wax moth, and so removing these would hopefully lesson the chances of wax moth, or at least lesson the quantity of the shit-bags (I don’t like wax moth). We found and marked the Ivy queen – with Jen’s steady hand meaning a sensible paint scheme was applied. We had a nice build-up of brood, sufficient stores, and a generally rosy state of affairs.

Holly, by contrast, continued to throw up her usual set of challenges! While we couldn’t find the Holly queen, despite rigorous inspections, we did find all evidence that she was there – in the form of sealed and un-sealed brood. In the super… This was about par for the course! Still, we were happy that we were queen-right, and we concluded that it would only be a matter of time before she revealed herself. Inspections of Holly then increasingly revealed growing numbers of charged and un-charged queen-cells. This, we assumed, was the result of the bees in the brood box being separated from their queen, who was clearly in the super and may not have been giving them the strength of pheromones that would keep them busy, focussed, and content. In addition to this, our inspections became a war of wills between us and 40,000+ defensive bees. To help resolve this, we removed the queen excluder, hoping that the queen might sod off down to the brood box, and settle everything down.

On one inspection Jen was driven from the apiary, and on a subsequent one I struggled to see through the wall of bees on my veil, and the angrily circling cloud of hundreds, or thousands, of upset “girls”. The sheer weight of numbers meant that getting stung, even through marigolds, gauntlets, and my Chernobyl bee-suit become a formality – which it did.

Happily, and 2 full months after the swarms, I was delighted to be able to say “got her” as I finally clocked eyes on our errant queen. Pinning her in the crown of thorns, and smoking her attendants until they left coughing and spluttering, we painted her. She’s laying well, and the colony appears to be in good condition – building up nicely.

This episode reinforced certain learnings and decisions. Having two colonies was undoubtedly a wise move – giving us options, learnings, and useful comparisons. It also helped us fully accept the “be patient” mantra after a swarm. We went several weeks before signs of laying, and several more before locating our new queen. 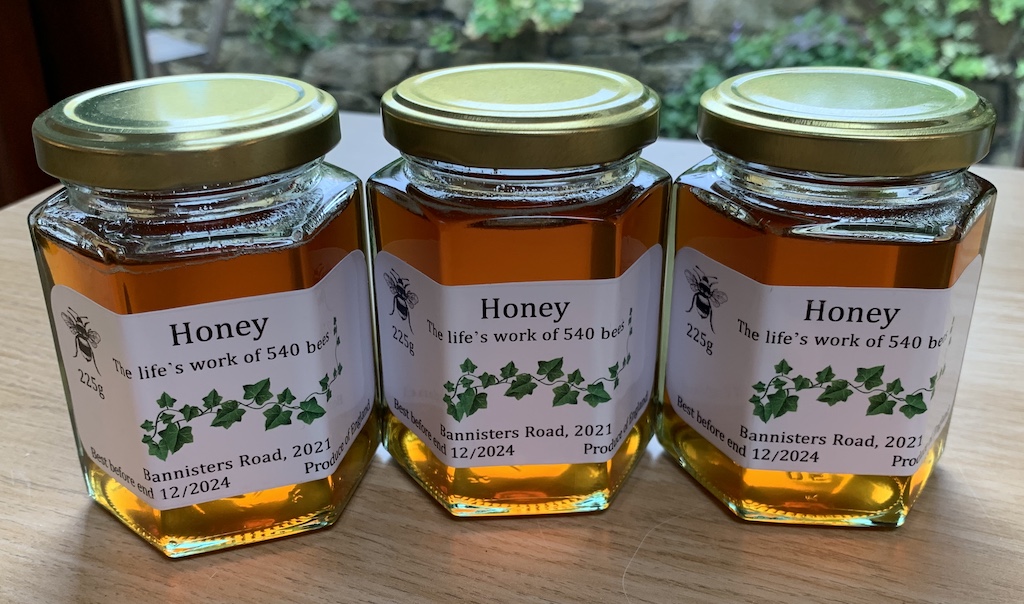 With the spinner booked, and the end of the season approaching, we decided it was time to relieve the bees of the responsibility of defending their honey from the wasps! Well, we did this with Ivy. Holly, through the actions of her queen, had made this difficult by laying in it, and while we realised that we could exclude the queen, wait for the brood to hatch, and the cells to be cleaned, we decided that this would delay Holly’s preparations for winter for several more weeks. So, Holly, you get to keep your hard work!

Un-capping, spinning, filtering, and “bottling” the honey was simple enough. We got approx 5Kg of amber nectar, and having opted for 8oz/ 225g jars, we happy filled 24 jars, and labelled them up.

We have no plans to sell the honey, but if we did, and ignoring our time, we’d be charging about £250 per jar!

As late summer turns to autumn, we’re readying the hives for the winter. The flow (source of food) is down, it’s cooler, there’s more rain, and the breeding cycle is coming to a close. Those drones that didn’t die while mating are now being consigned to a cold and hungry end to their lives as they are unceremoniously ejected from the hive. We’ve under-supered, added the syrup feeders, reduced the entrance, and removed the queen excluders. We’ll soon reduce the entrance further, protect against wood-peckers, and hope that in the spring, when the days are warm enough, and the flow is on, we will have 2 viable colonies.