We took the train from London to Edinburgh and tried to collect our hire car, without success. The mini-van that we’d booked had been written off earlier in the day, and we had to settle for an XC90. This is not a small vehicle, but put 6 full grown men with rucksacks and all the kit for the challenge into it, and we were soon jammed into uncomfortable corners. Not ideal…

We over-nighted in Pitlochry, and in the evening we ate, and then sat outside a pub in the evening sun, quaffing beer, chatting about what we were embarking on, and generally having a great time. The beer flowed quite freely, before we headed back to the hotel to enjoy a whisky or two.

My alarm was less than welcome, and as I blearily got ready, I reflected on the odd decision to get pretty plastered the night before embarking on a tough 24 hour challenge! A full cooked breakfast and a couple of large scones later, and I was more or less ready to travel. We drove to Fort William, explored it’s shops and bought travel neck pillows, before diving into Morrisons for supplies. At this point, it became all too apparent how little thought I’d given to nutrition, and I set about filling my basket with a random collection of un-planned and inappropriate snacks!

We made our way to the mountain car park, parked up and set about getting ready to start. We made up sandwiches, filled rolls, stuffed drinks and snacks into our packs, and set off towards the official start line. The time was now 16:30. 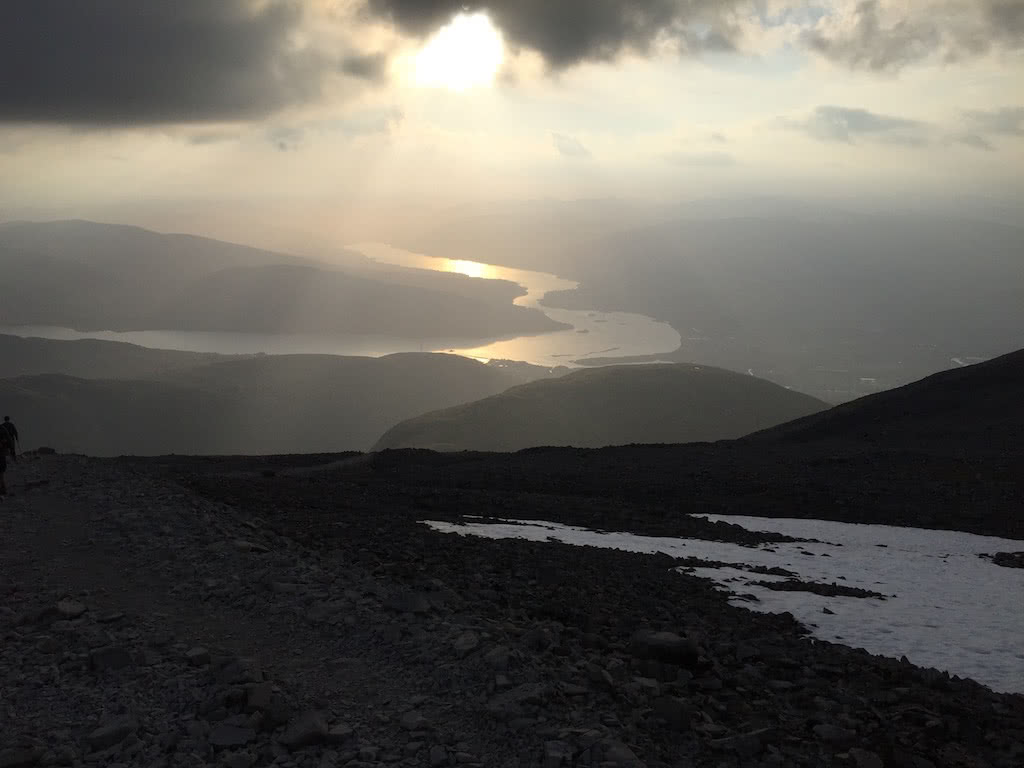 As we snapped a team picture, the heavens opened, and it started absolutely hammering down. Knowing that we were on a strict timetable, we donned our waterproofs, and set off up the path in fairly glum silence. The pace we set was frankly insane, and within a couple of Km, we had a team talk to thrash out how we were going to do this. We all had different abilities, with some of us good at ascending, some good at descending and some good at both.

The way up was simple to navigate, and easy to walk. The last 200m or so were across the remains of a snow field, and then we summited, picking our way over the shattered rocks on the summit.

The views were spell-binding, and we were blessed with fabulous weather. When standing at the summit trig point, I felt a childish sense of excitement that at this point, we were the highest people in the UK!

The descent was done at a frankly crazy speed, compensating for the delays we’d experienced on the way up. As we descended, the sun was setting, casting an absolutely mesmerising golden glow across the surface of a distant sea loch – Loch Eil.

Ben Nevis took us about 5.5 hours, and we gratefully piled into the XC90 for the overnight drive to Wasdale Head, and Scafell Pike.

In my next post, we take on Scafell Pike.