Today, I am flat. Perplexed. A little despondent. Our girls have gone from interesting to worrisome, and we really don’t know what’s going on.

With the events of yesterday behind us, I hoped and expected that we’d had a big learning point, a good experience, and now everything would be on an even keel. Through the day I wandered up to the apiary, and revelled in the busy industry of the 2 colonies. The apiary was a happy hum of departures and arrivals – with the beautiful choreography that the girls achieve.

I routinely greeted them, and complimented them on their endeavours and industry. Yep – I talk to them.

I’d been working up the garden for a while, under the tree that one of the colonies swarmed into last week, when I looked across, and through the wicker fence that is the apiary enclosure.

The hive had changed colour. It was no longer uniformly pale blue, and the top of the hive was bee coloured.

Not having my phone with my, I went to the house to collect it. 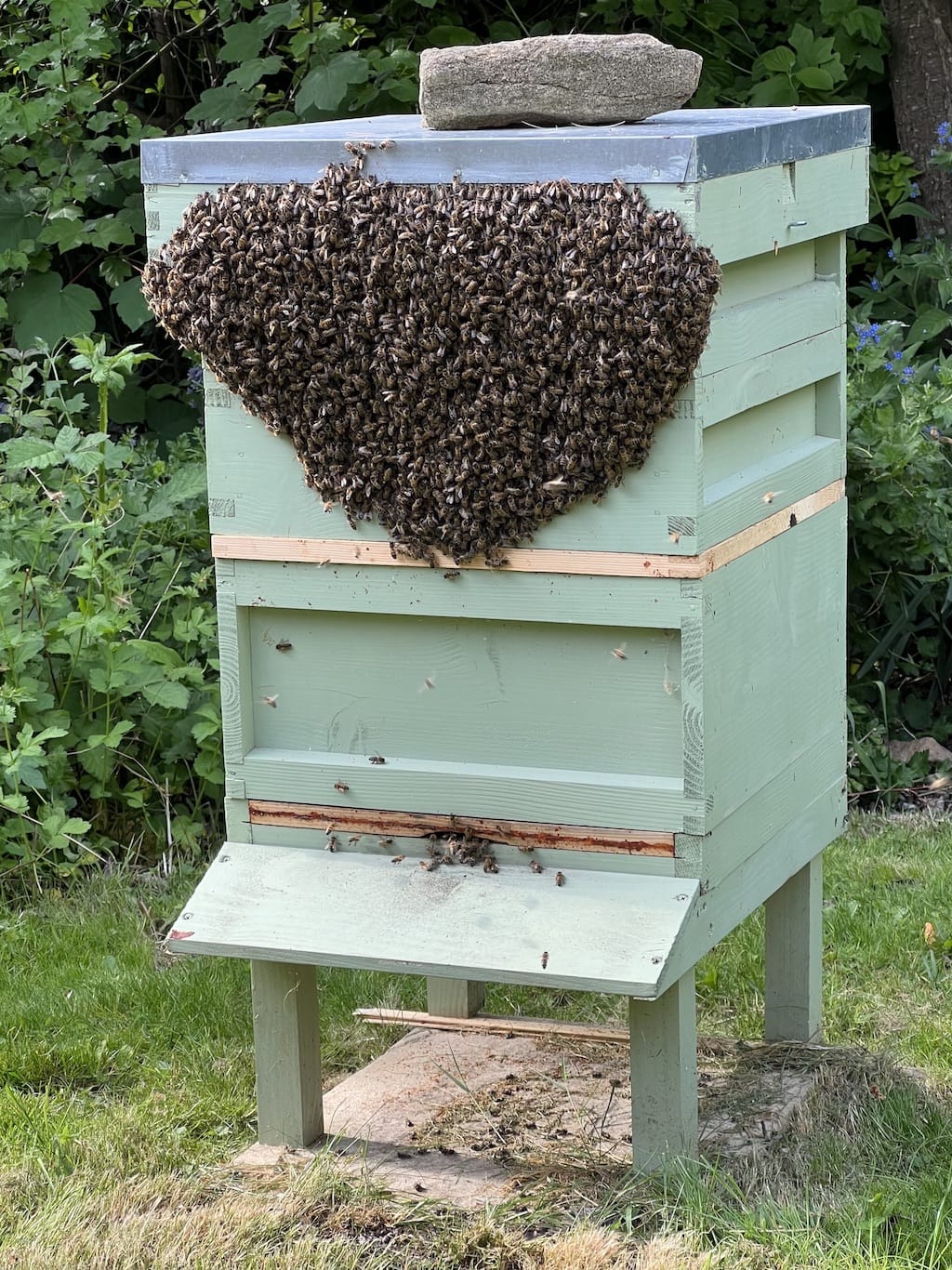 I grabbed by phone, suited up, and made myself comfortable in the apiary – figuring that I could enjoy the experience, confident in the knowledge that the girls would return inside when the queen returned. I started videoing the landing-board, hoping to capture the moment that the queen returned. 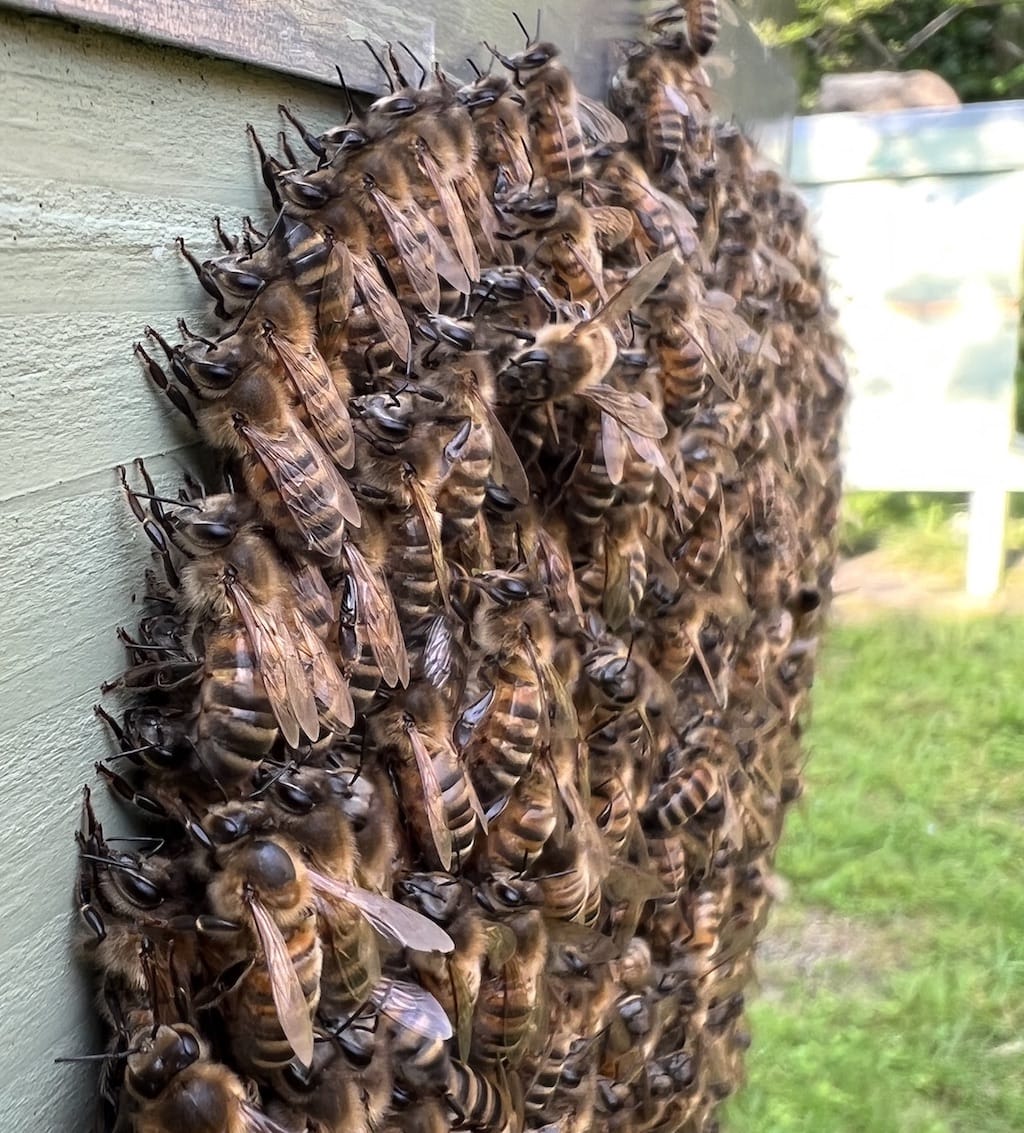 The way in which the perimeter of the “swarm” was marshalled in an outwards facing direction is either chance (very unlikely), or security – affording a view of anything that arrives (possible). 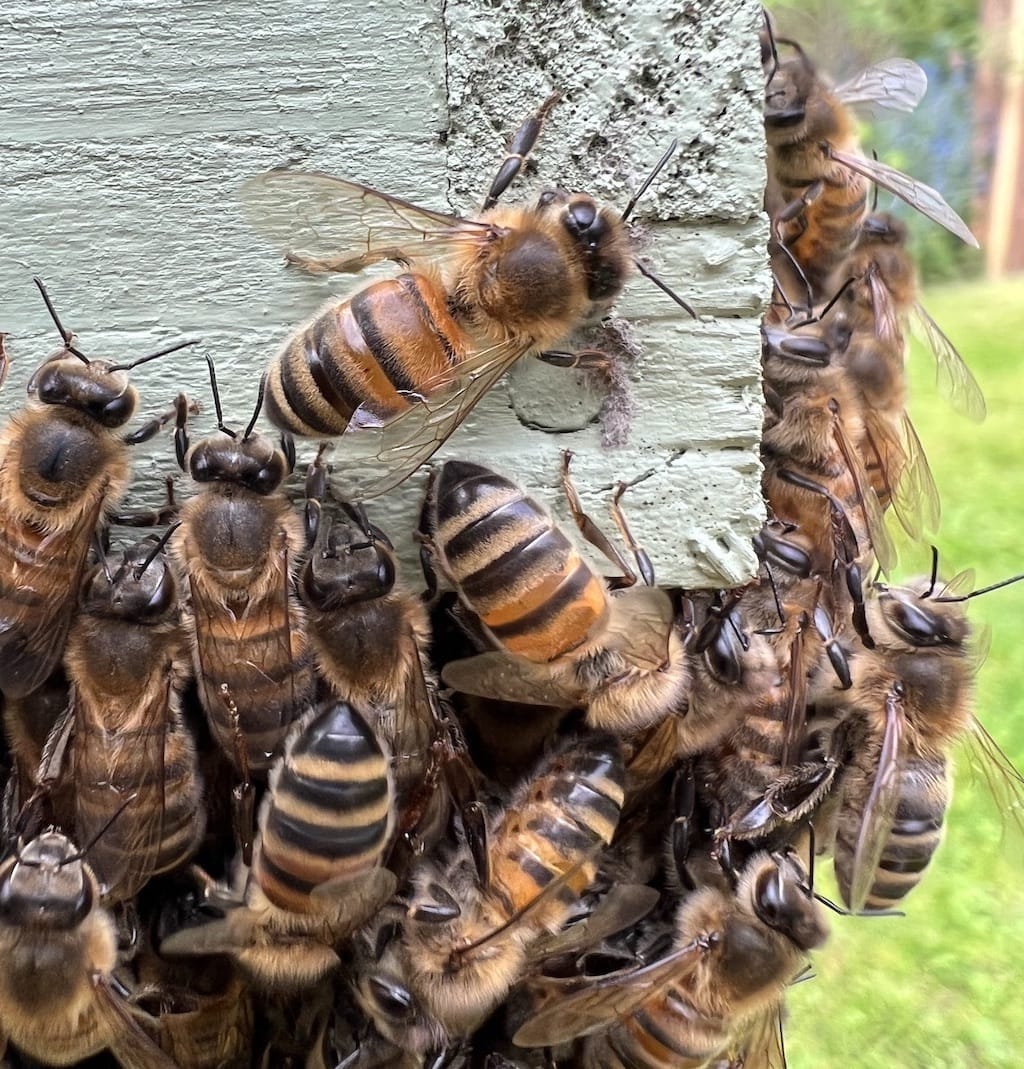 Having watched for some time, and thinking that I might have seen a queen on the landing board, the girls showed no signs of movement whatsoever. There was coming and going on the landing board, with foragers leaving and returning. Some of the flying bees would land on the “swarm”, while many made their way inside through the entrance block. I was able to touch and photograph the bees on the hive, and a small number landed on my gloved hand – showing no signs of agitation or desire to sting. As a collective, they were entirely chilled. 2 hours after I’d first seen the event, we were faced with the same dilemma as before – what to do? Brush off into a nuc: In order to do this, we’d have to complete an inspection, or take a chance. If there were no queen cells, and no eggs or very young larvae, we’d be consigning the colony in the hive to extinction. Given that this colony swarmed a week ago, a new queen could not be in lay, and there would be no larvae young enough to be converted to queen cells. Leave them: The forecast for the night was cool and dry. They’d most likely survive, and could sort themselves out the next day. This was briefly our plan of action. Sweep them down into the brood box: I’d been up the garden on and off during the day, and had seen no flying. If this was an inbound swarm, would it have been possible for them to simply arrive, land, and settle – with no activity? Also, they were showing no sign whatsoever of wanting to go inside. Again, if they were an inbound swarm, would they be so settled, and lacking in drive to get inside, and start work? Whatever the rights and wrongs of this decision, and only time will tell, we gently swept them into the brood box. Simply leaving them on the hive front felt like an abrogation of our responsibility. As we opened the hive, there wasn’t the usual hum of activity that you can feel in your chest when you open a busy hive. This noise and vibration is something that is very hard to put into words. Posting into our bee-keeping WhatsApp group, it was once again suggested that this was an incoming swarm. If that’s the case, then we will likely lose the colony through civil war. At 7am this morning the hive is quiet. Let’s see what today brings.
previousBee street party
nextBees on quaaludes