Bee-keeping is already proving to be many things, and predictable is not one of those things. In a post that I hope to look back on and think “What was he fretting about?” I ponder the first few experiences.

First hive inspection completed. Not an un-bridled success if I’m honest. I had an uber angry bee in my face for a while, before it decided that the inside of my bee suit hood would present a much richer set of entertainment options on its part. With it now circling wildly around my ears and face, I beat a hasty retreat from the apiary, followed by an unknown number of striped assailants. One crumb of comfort was that when it finally stung, it was on my cheek. 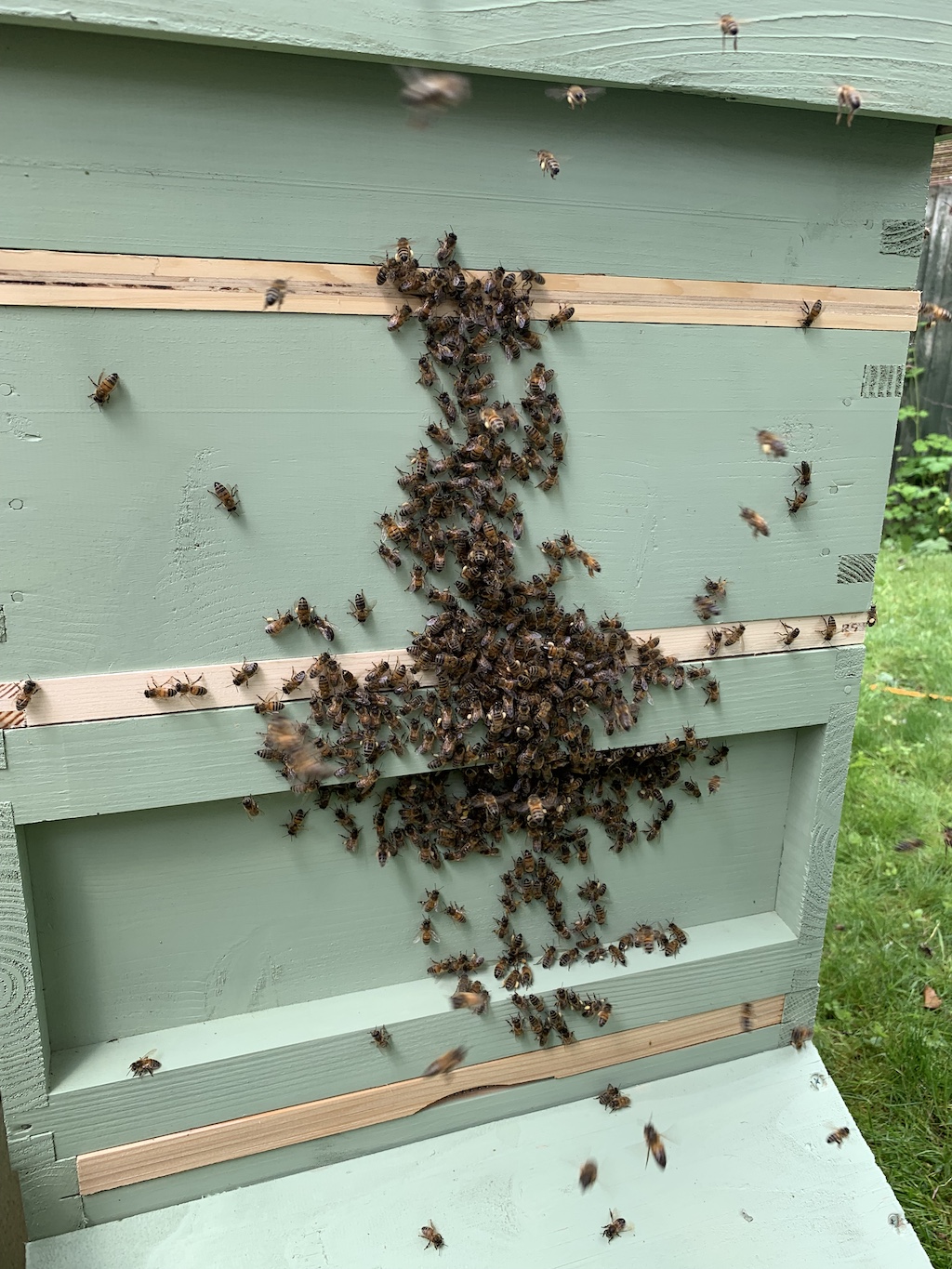 There’s little doubt that bee-keeping is not as I expected it to be, and at the moment, I am out of love with the activity, and not in love with the bees. This last point was something that I concluded while tidying the garage just now, pondering my thoughts and emotions as I did so. I feel sad that I’m not feeling the love, but there are reasons.

Yesterday, with the weather forecast set to be pretty crappy, and with our colonies at very different stages, we knew that we needed to complete an inspection on Saturday morning. So, with the temperature hovering at a borderline 14c, we suited up and readied ourselves. Because of the early experience of a bee in my hood and being stung (previous post), I’ve realised that when I suit up, the emotions I feel are oddly reminiscent of how I used to feel when getting into open water for swimming. The parallel is simply that of a poor experience at the first occasion of doing something new.

So we suited up, smoked up, and entered the apiary – which was understandably very quiet, given the conditions.

I opted to inspect Holly (our problem child) first, while Jen would take Ivy. Holly is lagging behind Ivy in every respect, and on any given day, the activity around the hives couldn’t be more different, with far more activity around Ivy, and a far greater and faster build up. Rationally, I know that comparing the colonies is not right or “fair”, but as we got them at the same time, I find it difficult not to.

Having removed the roof, super and queen excluder, I was quickly attended to by a reasonable number of persistent bees in my face, on my gloves, and on my suit. Even after such a short time as a novice bee-keeper, the difference in behaviour is quite evident from one inspection to another.

Working my way through the first couple of frames, I was suddenly aware that I had a bee in my hood, or I’m 95% sure there was one in there. To my ear, the buzzing has a different, closer, and less variable tone when they’re inside. Putting my current frame in the hive, I retreated and sorted myself out. We went back to work. Now, it seemed less of a hobby, and more of a chore. By frame six I’d been stung on the pad of my little finger, which for a bee-sting, hurt. This made manipulating the frames, while holding a hive tool, and a torch, borderline impossible. With my mojo dwindling to 2/3 of fuck-all (sorry if you’re offended), it became a task to be completed, and my focus was restricted to the basics.

Not having seen the queen, nor eggs, and sod all pollen or nectar, I quickly inspected each frame again, hoping to see more stores, and the queen. Neither was evident, though we did have lots of sealed brood. Holly has scarcely explored the Super, having only partially drawn out a couple of frames (I had dribbled syrup over the frames to encourage exploration). Her stores have dropped in one week from 3P and 6N to 1P and 2N – and even these were sketchy amounts. By the end of the inspection, I’d picked up another finger sting, and was frustrated, irritated, and worried for Holly in equal measure.

Jen inspected Ivy, who broadly speaking was in rude, if lively, health. She’s doing everything we need, though her stores are equally modest. We’re putting our faith in the industry she is applying to her super.

So, what gives? As a person, I have historically preferred certainty – though this has changed as I’ve moved through life. I don’t like things that don’t work as I expect them. I like things that are regular and consistent. I found having young children immensely challenging – due to communication challenges. I like having points of reference, and being able to turn to proven solutions. I don’t like not being good at things. This doesn’t sit well alongside a gift from the parenting I received which is a sense that “I’m not good enough”.

Bee-keeping talks to none of these personality traits, although I realise that in writing this, I’ve called out the needs that aren’t being met. I have a deep-seated passion for nature, and the decision to keep bees was mostly about the interest, and much less about the harvesting of honey, or societal/ natural world benefit.

At the moment I don’t see the balance between cost (broadly inconsequential), time and effort, acquisition of skill, and enjoyment. I know my last inspection was crap, and I want to be better at it. I feel like I’m letting Holly down, and I’m anxious on many levels. And while I know that they’re being defensive rather than aggressive, I’d rather not be picking up stings with pretty much every inspection. New gloves are on the way, and we’ve made alterations to my bee-keeping suit.

I am conflicted internally. Bees are incredibly sophisticated creatures, and the ways in which they communicate and collaborate are mind-boggling. With such numbers of bees, they feel like they should be immensely robust, and yet I have seen first-hand the product of not feeding a colony, and tens of thousands of bees who have starved to death in less than 2 weeks of poor flow, and no feeding. The range of predators, pests, and diseases that will weaken or destroy a colony is significant, and the detection and effective treatment of these requires skill and knowledge. This sense of responsibility and uncertainty is not something that I entirely expected.

When I played golf many years ago, if I was having a poor round, it would only take one good putt, a lofted wedge onto the green, or an arrow-straight 5 wood down the middle of the fairway to bring me back to the course next time. Yesterday, that “golf moment” was watching one of our girls emerging into the world. We watched for maybe 3 or 4 minutes while she worked her way out of her cell. Had the weather been warmer, we would have undoubtedly watched her fully emerge into the world. Instead, out of consideration to the rest of the colony, we popped her frame back into the warm. I need more golf moments, that’s for sure. I want to be able to enjoy our girls – to counter-balance everything else. I want sit with a camera and to photograph their exquisite and wonderous qualities. Possibly more than that, I want to know that they are “safe” and that I’m doing right by them.