Until the the war of 1982, most people had little or no idea, or interest, where the Falklands were. Whether re-capturing the Islands was political (it secured a further term for Mrs T), economic (the oil, fishing and gas could be worth £billions), the last vestige of defence of our former empire, or truly to protect the wishes of the population is the subject of much discussion.

Whatever the reason, the FI population are fiercely British, and this is a destination that absolutely should not be missed. The wildlife is beyond belief, and the scenery and isolation are heart-grabbing.

You need to like the wind and air travel to get the most from a trip, but it’s absolutely worth it.

At the time I made the journey in January 2014, one of the simplest ways of getting to the Falklands was on an RAF transport plane, taking forces personnel to and from Stanley. Although other routes existed, including some direct “oil flights” from Gatwick, and civilian flights via Santiago, I chose the military route.

The process at the time involved contacting an agent in London (not James Bond, but a government booking agent) who checked the MoD schedule, and then did or didn’t book you on. With family in the Falklands, my acceptance onto the flight was straightforward.

I was looking to travel as early in January, simply so that I could transition straight from Christmas to the holiday.

I duly arrived at Brize Norton on the 2rd January 2014 – due to take the first Southbound service of the year.

The base is huge, but due to the time of year, was largely deserted. I completed the formalities at the gate, collected my mess token, and headed to the accommodation. The block was being refurbished, but was clean, and aside from the sign warning me of legionnaires disease if I drank the tap water, it was fine.

I wandered to restaurant at my allotted time, had my dinner and moved to the bar. Christmas spirit was in short supply, and I guess anyone on the base was either heading out on a transport, or working. None were there because they wanted to be…

After a couple of pints, and a decent night’s sleep, I was lining up with army personnel to register for my flight. It was weird beyond belief, standing in line with people carrying bergens, dressed in combat fatigues, and with their protective equipment. The flight destinations were the other sign that I was not somewhere usual. The one that stands out in my mind was Helmand. These guys were heading to an active combat zone, knowing they could be killed.

The plane – a nearly new Voyager – was about 1/3 full, with a full 3rd given over to a flying hospital – another sobering thought. I settled in, and within a few hours, we landed at Ascension Island.

Having arrived at Ascension and disembarked, we were told that due to logistical issues, we were going to have to overnight – as there was no pilot to take us further. I yomped from the airstrip to the accommodation which was utilitarian, dumped my bags, and went for a wander. I didn’t have long, and without any form of information, there was little to see. I soon found myself in the bar, watching EasterEnders in the middle of the Atlantic, drinking Fosters from a can. While in the bar I got chatting to one of the few other civilians from the flight – who turned out to be a resident of the islands, returning home in his capacity as vet.

The next morning we embarked the Voyager, and set off for the second leg of the flight. All I remember is water, water, water, and more water below us. 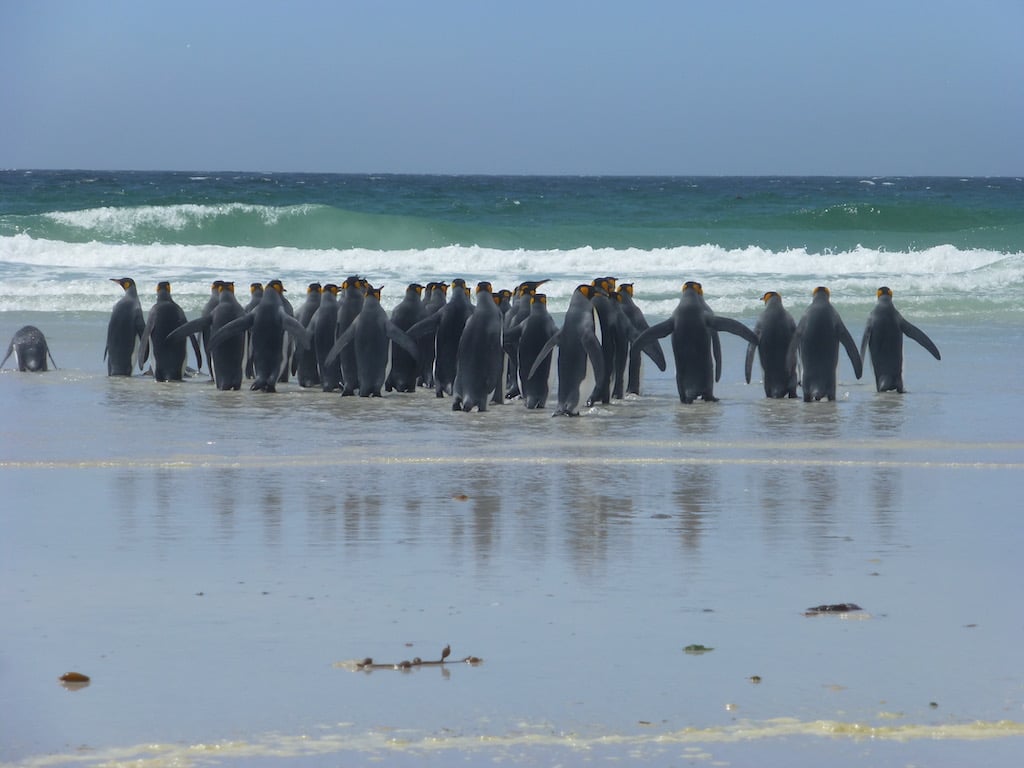 Arriving over the Falklands, I was struck how colourful vibrant Port Stanley was, while the rest of what I saw of the islands appeared to be beige and grey. We were soon on the ground at Mount Pleasant – the military facility for RAF and Army. Having cleared immigration, customs and security  I was collected by my cousin – Rob.

Aside from the base itself, the drive from Mount Pleasant into Stanley provides immediate reminders of the war, with numerous areas fenced off behind “Minefield” signs. Huge numbers have been cleared and many more areas remain.

Rob took me into Stanley where I met up with my Aunt – Rosemary, who was kindly putting me up. The next few days were spent staying in Port Stanley. Trips out to Gypsy Cove, Ordnance Point and Yorke Bay gave me my first sightings of penguins and sea lions, as well as bird life. Even within 3 miles of Stanley, there were no other vehicles or people, and I was free to explore as I wanted.

The evenings were spent having dinner at Shorty’s, and in the various drinking holes. The local brewery had gone bust some time before, so all beer was shipped from the UK in cans. I recall someone saying that a lot of food and drink came from Sainbury’s in Liphook, or similar!

Before I knew it, we were heading out towards Dunnose Head – on West Falkland – where Rosemary lives.

As we drove west, we visited names that had become very familiar due to the events over 30 years ago. Fitzroy, Darwin and Goose Green all brought memories vividly back. We got the ferry across to Port Howard, and drove on roads that were increasingly lively until we arrived at Dunnose Head. Dunnose Head is comprised of 2 farms, one of which is vacant, and the nearest other humans are about an hours drive away. This is a remote spot on the island, so you need to be good with your own company.

I spent an enjoyable 3 days with Rosemary, Dot (cousin), Alex, George and Kate. We fished, we saw penguins, and I walked. Before I knew it, I was waiting on the grass airstrip for the Islander – the air service run by FIGAS. These are small turbo-prop planes flown by talented aviators that land on impossibly short strips in high winds.

As we were weighed and given our seats, my apprehension about flying in what looked like a red coffin with a propellor grew. Before I knew it, we taxi’d about 20 feet down the grass, and then shot into the sky. We flew to Sea Lion Island via Port Stephen and Port Howard, and at one point appeared to be flying directly into a cliff, before a last minute adjustment saw us land on a strip about 50m long. At each intermediary stop, we disgorged mail, and took stuff on, and the welcome that the plane received was quite something to behold. These are isolated communities that see people infrequently. We finally landed on Sea Lion Island on a graded strip, and I settled into the lodge.

If the plane had seemed like a coffin, the room I was in was markedly smaller. With scarily room to open my suitcase, let alone swing a penguin, space really was at a premium.

Exploring the island alone was magical. I was provided with a basic map, but with the howling gale that was a feature of my time on Sea Lion Island, it was little use. It was all I could do to keep my glasses on, let alone read a map.

My travels took me through tall grass, nearly stepping on seals, being attacked by a striated caracara, and to a desolate and windswept beach, on which I found elephant seals and penguins. With the wind whipping off the ocean, I was sand-blasted into a grainy world of foam, sand, and spray. The elephant seals were simply humungous, and I was happy able to snap them with my iPhone from a few feet away.

Another collection of invigorating flights found me arriving on Pebble Island – at the northern end of West Falkland. Pebble was known for several reasons, including the sinking of HMS Coventry, the first land attack by the British forces, and a hostage situation, where several families were rounded up and held together by the occupying forces.

I spent an amazing 2 days seeing dolphins, Rockhopper penguins, Gentoo, King Penguins and a wide range of other bird life. We travelled most of the island, and I was captivated by its empty beauty – having a pristine 4 mile beach of white sand to myself. With only my footprints behind me betraying any human presence, the sand skittered across the pure flat beach as the sun began to set. I fell in love with Pebble Island, only to watch the most fabulous sunset develop. And I fell in love some more.

I could only stay so long at Pebble, so it was back to Stanley, flying in to the Port Stanley airport. From here, I was taken on a hair-raising drive to Volunteer Point. Volunteer Point is home to a significant King Penguin breeding site, and I was treated to the spectacle of hundreds of adults, young adults, moulting juveniles, and babies. It was simply spectacular to see how something as ugly as a brown “mop” could turn into one of the world’s most beautiful creatures. Once again, I had a huge expanse of beach almost to myself, and I was treated to the spectacle of a group of Kings heading out to fish. They walked hesitantly and in ungainly style towards the breaking waves, until one of the group plunged in, and the rest followed. Ungainly on land, they are phenomenal swimmers, with grace and elegance in the water.

Although I had visited the Islands primarily for the wildlife, I felt I should understand the war a little better. I toured most of the major sites including 2 Sisters, Mount Harriet, and Telegraph Ridge. The weather conditions faced by both sides were horrendous – being the middle of winter. I saw moving tributes to fallen comrades, brothers, fathers, husbands, and sons.

As the Voyager aircraft climbed into the sky from Mount Pleasant, a glance out of the window revealed a pair of Typhoon aircraft seemingly about 20 feet from our wing. They started on the port side, posed for photos, and then repeated it on the starboard. This was a fitting end to a magnificent trip.