The social media echo chamber provides rich opportunities for self-expression. But will it hold brands to account, and bring about the long-overdue widespread acceptance of inclusive marketing, or ultimately harm the cause, and be the death of creative marketing?

Equality and Diversity in Marketing

While sat in having a coffee in my favourite café, the Snooty Fox in Shalford, I happened upon an advert in a local community magazine that caught my eye. The ad headline struck a chord with me:

“Is Dad struggling to manage at home?”

The sub-points also strongly resonated with me – encapsulating succinctly and directly my concerns for my aging father. I took a picture in order that I had the URL so that I could read further later in the week. The simplicity of the image, font and colour palette all contributed to draw me in. Now, for what it’s worth, I’m not holding it up as an icon of creative excellence. It’s blocky, there are variations in the hues of purple used, and I’d imagine that it was created in powerpoint. This isn’t a criticism – you’re not going to commission a London agency to produce creative for ad space that probably cost £50. Later in the day as I was working, I reflected on the ad. Was it targeted, simple and effective? Or was it sexist and judgemental, consequently failing to adhere to the principles of Equality and Diversity? I felt it was/ should be the former, but recent experiences of the reaction to adverts led me to question this. 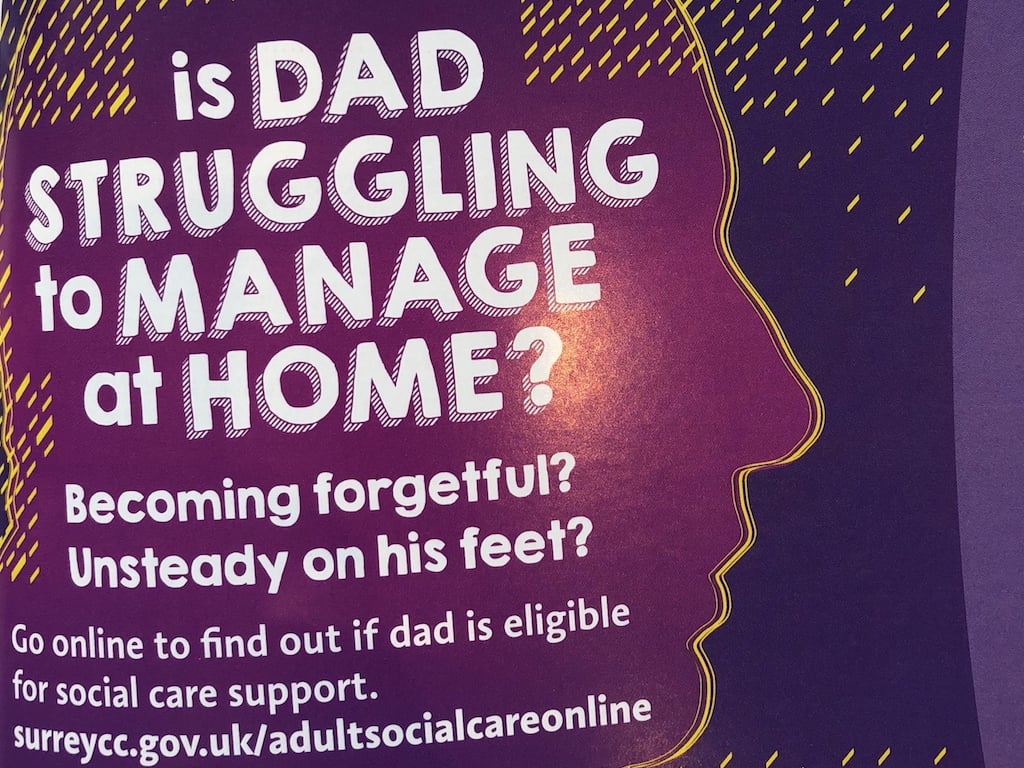 In 2017 Italian bicycle manufacturer Pinarello came under heavy fire for its advertising campaign supporting the launch of their e-Bike – the Nytro. Central to the criticism it received was an ad featuring a 24 year-old who claimed that by purchasing a Nytro, she’d be able to keep up with her boyfriend on bike rides.

The ad was attacked by scores of individuals – male and female alike. The anger and indignation were clear for all to see, and Pinarello had made a serious mistake in suggesting that female riders were slower than their boyfriends.

A separate ad in the same campaign featured a 55 year-old male who wanted to ride with his friends, however he was unable to exercise during the week. The product of his week-day sloth was a need for a Nytro to help him keep up with his friends on the weekend.

While drawing less ire than the female equivalent, this ad was attacked for being ageist in suggesting that a 55 year-old wouldn’t be as strong or as fast as a younger rider.

Pinarello reacted to the anger being vented at it, and quickly pulled the ads citing Equality & Diversity:

“Our recent advertisement failed to reflect the values of diversity and equality that are core to Pinarello,”

“The Nytro is designed to make cycling accessible to more people and our advertisement clearly failed to convey that message. We sincerely apologise and have pulled the ad.”

So, back to the original ad – about Dad not coping. Looking at how the Pinarello ad was received, is the “Dad ad” sexist?

Viewed in isolation, the Dad ad infers that men are more likely to need help from their off-spring than women would – else the ad should simply say “Is your parent struggling to cope at home?”

It also infers that men would not seek help or support, and that it is your responsibility as their child to do so on their behalf.

What about carers who are not a child. Siblings? Friends? Other relatives? Do they not care enough about “Dad”?

Is it a cliché, or generally accepted, that men, on balance, don’t like seeking help?

Is it a cliché, or fact, that women generally have a bigger role in raising children, and consequently are more able to manage at home alone through the experience acquired?

Is it a cliché, or a generally accepted fact, that women are generally more willing to discuss their worries and fears, and to seek help?

Depending on the answer to the above, and thinking back to Pinarello’s experience should the Dad ad should be pulled, as failing Equality & Diversity? 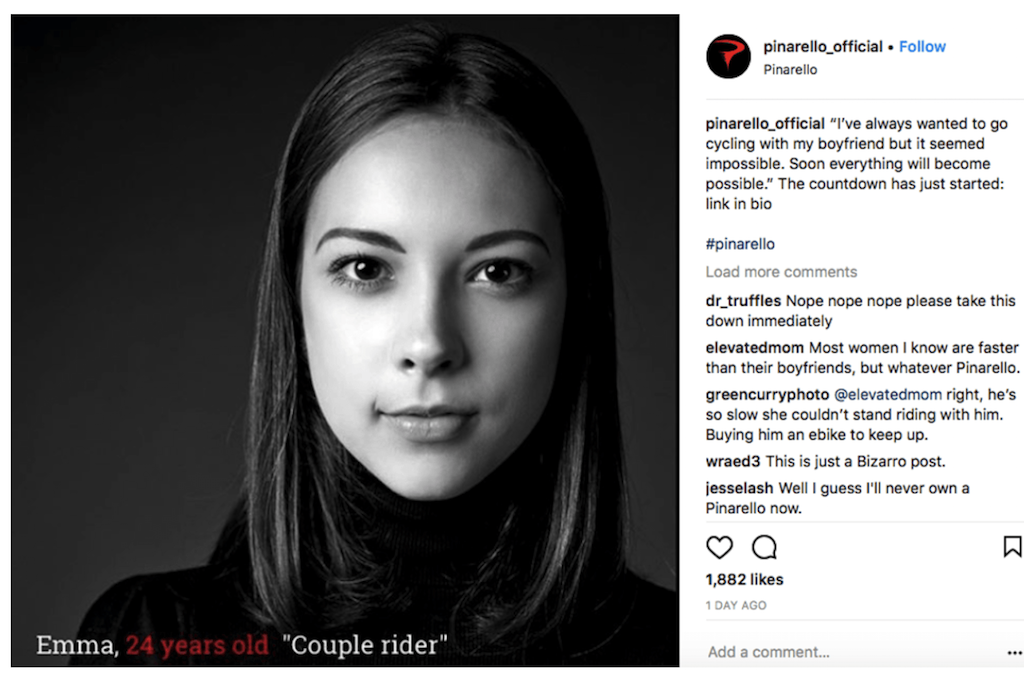 Is it a cliché or fact that men are genetically, and on a statistical basis, physically stronger than women? The sporting landscape bears this out, with few instances of men and women competing directly against one-another at a senior competitive level in sports that rely on strength and stamina. Equestrian, bowls, match-fishing, indoor sky-diving and a sailing class break the rule.

Of course there will be females in any combination of relationships that are stronger than their partner – boyfriend, or otherwise. And there will be females that can beat the majority of males – Chrissy Wellington and Paula Radcliffe being two examples. It’s a nailed-on certainty that this will be the case.

I don’t know that the Pinarello ads really failed on E&D, and most definitely not the creative featuring the 55 year-old. He doesn’t say that his age is holding him back – just his lack of fitness relative to his friends (we don’t know their age or gender). Throwing an age-related punch at this ad is just ignorant.

Based on the reaction, the execution with the young lady wanting to keep up with her boyfriend could never work in any guise/ execution that hinted at a desire for battery powered cycling help. Any suggestion of a gender, or in fact any cause for, “weakness” would fail the test.

The ads talked to a need. As consumers we have needs. My wife would be delighted with a Nytro, enabling her to cycle with me. That’s not a weakness in her – she just doesn’t cycle much, in the same way that I don’t play much tennis.

I could do with a Nytro to keep up with somer of my (older and younger, male and female) triathlon club friends. Never, in a month of Sundays, would I buy a battery powered road bike though. I’d rather try and keep up on foot than spend £6K on a bike my friends would all know had a battery inside it…

I contend that less than failing Equality and Diversity, the Pinarello female ad was clumsy, mis-targeted, patronising and sexist. None of these are positive qualities, and the ad should never have aired.

But I am far from convinced that it was a genuine failure to embrace E&D, and I don’t think it benefits the advancement of the cause to use E&D as a stick to beat clumsy brands that should know and act better.

Anyone with a real interest in Pinarello is going to be serious about cycling, considering that that these bikes are at the top-end of the sport. If you’re in market for one of their bikes, you’re going to be dropping several thousand pounds, be fit and strong, and know your machine. Or in the “All the gear, no idea” camp.

Looking further at this campaign, the Nytro page on the Pinarello website features an “older” bearded guy out on a ride being caught by 3 younger male friends. With a patronising pat on the shoulder, they pass him, and his dismay is clear for all to see. And then he fires up the Nytro, re-joins the group, and his day is saved – until the point at which he gets another patronising pat on the back…

How can an ad featuring people avoid suggesting that one group, whoever they are, is more in need of assistance than another? Race? Age? Gender? Height? Weight? Disability? It cannot be done. So, to achieve this neutrality, you have to remove the person. And here’s the rub. Cycling is about the person and the machine.

Marketers need to avoid tokenism – a form of positive discrimination, where a group is included for the sake of it.

Considering this, what is Midget Wrestling? Is it a cynical exploitation of people of unusually short stature – a modern day Victorian freak show? Or is a sporting spectacle that allows people with an unusually short stature to compete in a sport that has long embraced a cartoon style approach? If Midget Wrestling is viewed as a freak-show, doesn’t that mean that society needs to change, such that it’s normalised?

Diversity and Equality in marketing, and elsewhere in life, is essential. Long gone should be the days of sex selling, heroin chic, and flawless and scantily clad perfect 10’s making us feel undesirable for not being like them. Marketing and Advertising must be inclusive – addressing everything that makes us the society that we are.

Brands such as Maltesers should be applauded. In their campaign, timed to coincide with the opening of the Rio Paralympic games, they featured people with disabilities in familiar scenes.

The ads may have caused some to question the use of people with disabilities, resulted in discomfort for some people, and conceivably discouraged a few from the brand. This pause for thought is a natural part of the journey, and change cannot come without it.

The campaign was intelligently conceived, well executed and commercially successful. What’s not to love.

I accept that there may be an equivalent creative for “mum”, guys are a bit crap at asking for help, that women generally cope better, and that children become carers for their parents.

Self-righteous indignation in the eternal echo chamber of social media is not the same as responding in a considered manner to ads that set out to deceive, mislead, judge or demean. As a population we need to get down off our high-horses, and stop levelling largely baseless criticism at brands where the only objective is our own self-promotion.

Continual feeding frenzies regarding the semantic, detract from the bigger issues in life.

Without due consideration of our words and actions, far from advancing the cause of Equality & Diversity, it could put it into the “EU straight banana” category. I leave you with a couple of examples. Are they humorous and tongue in cheek, or using sex to sell, and racist?