Having reached something of a roadblock in my research into my direct ancestors in the Longley line in Leeds, I started out researching other lines. This was for several reasons:

I started looking into the “Kent Longleys”, and quickly happened upon “Thomas Longley” – reported as being the heaviest subject in the British Empire.

It’s worth considering that in 1913 (shortly after he died) the British Empire covered 412 million people, covered 23% of the worlds surface and accounted for 24% of the world’s population. If he were indeed the heaviest subject in the Empire, that’s quite some claim to fame!

Thomas was not the heaviest man in history at this point, and was a whopping 6.75 stone lighter than the somewhat cuddly Daniel Lambert of Leicestershire, who tipped the scales at a little under 53 stone. 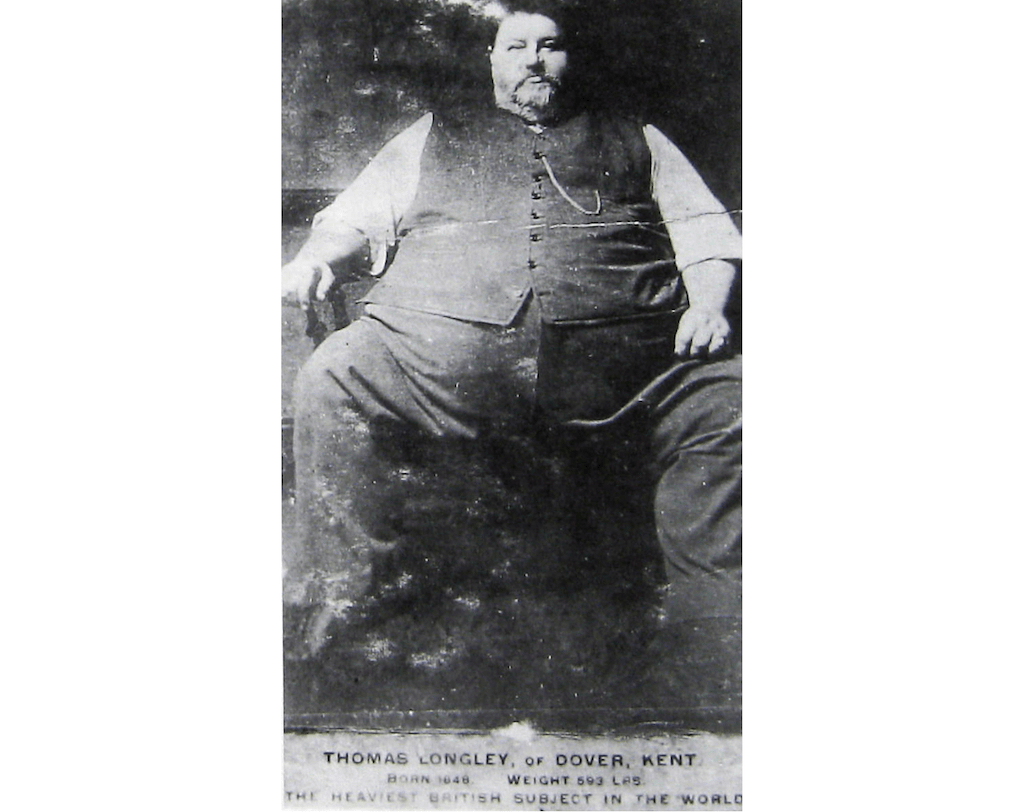 Thomas was born in 1848, the son of William (a butcher) and Esther Longley. When born, his parents were living on Snargate Street – the seafront road, nestling beneath the White Cliffs. He was one of 6 children (3 boys and 3 girls), with the eldest brother Edward following in his father’s footsteps as a butcher.

In May 1873 he marries Helen Osborn in Dover, and they set about having a family.

At some point, he appears to have moved to London, where Ernest, his only son, is born in 1879 in Kennington. He is listed in the 1881 census as a licensed victualler in Kennington.

By 1891 the family have returned to Dover, and he is running the Star Inn on Church Street.

Reports from the time

What follow are reports from the time that have been edited only on a relatively minor basis, primarily to reduce repetition. The key themes, sentiments and language remain un-touched.

There is now living in Dover, a publican named Thomas Longley, who claims to be the heaviest man in Her Majesty’s dominions.

He was born in 1848. His parents were both of great size, his father being upwards of six feet high. When Longley was about twelve years of age he was as heavy as an ordinary man; and he has continued to grow stouter year by year. He is now 37 years of age, and he weighs no less than 40 stone. He is 6ft. ¾ inches in height. He measures 66 inches round the chest, 80 round the waist and 25 round the leg. He began life as a butcher and afterwards took the Star Inn in Dover. For some time he carried on the business of an inn-keeper in Dover. He has a moderately good appetite, and his favourite beverage is gin or Hollands (a juniper flavoured drink). He enjoys pretty good health and is generally cheerful. Notwithstanding his great bulk, he sometimes serves in the bar. He does not now take walking exercise.

He was recently photographed by Mr. J. W. Browning of Dover. The photographer attended at the Star Inn and succeeded in taking a good photograph of Longley as he was sitting in a room. Longley wears a moustache and a beard cut in the American fashion. He has been married fourteen years and has three children, the eldest aged eleven and the youngest aged seven. His eldest child, a girl, is very stout for her age. He feels his great bulk a decided inconvenience, but does not, so far as is known, adopt any regimen in order to reduce his size.

It is stated that he was offered £1,000 to go to America, but declined the offer, fearing the effects of a sea voyage.

He was born in Dover, and though he may have some rivals in the matter of weight, the general opinion of the inhabitants is that his claim to be the heaviest subject of Her Majesty is well founded”.

Thomas Longley: “The heaviest British subject in the world”, according to a London paper, is Thomas Longley, a native of Dover, in which historic port he resides at the present time. When last weighed he scaled 593 lb – 42st., and as that was about a year ago, it is safe to suppose that he has since added to his enormous weight. Mr. Longley was born in 1848, and is the son of a Dover butcher. His father is still living, and is a man of average size, weighing about 14 stone. His mother, who died a few years ago, was an average sized woman. He has two brothers living, who are respectively 12 stone and 17 stone in weight. Mr. Longley was brought up to the business of a butcher but, for some years past, has been “mine host” of the “Star” Inn, Dover, where he holds receptions, on a small scale, of those who come to gaze upon his mighty bulk. He is assisted in the business by his wife and daughters. His height is 6ft ¾ inches, measurement of chest 70-ins., waist 85-ins. and calf of leg 26 ins.

As a youth there was nothing striking in his appearance, and he was then fond of outdoor exercise, being accounted a good runner and expert swimmer. It was after his marriage that Longley began to increase in size and weight, and for several years he put on flesh to the extent of three stone per annum. This rapid increase has now ceased, but his weight is still being added to, though more slowly. With respect to diet, he partakes of ordinary food, beef and mutton, for example, but does not touch new bread or beer. His huge size keeps him a close prisoner in his little bar-parlour, and with the exception of two or three drives, he has been constantly indoors for ten years past.”

The death occurred on Monday at Dover, at the age of 56 years, of Mr. Thomas Longley – a member of a very old and much respected Dover family. His father was a butcher in Dover, and he was born in Snargate Street. For many years Mr. Longley has been the landlord of the Star Inn, Church Street, a quiet hostelry at the rear of St. Mary’s Church. From his youth he developed great size of body, more especially in his chest measurement. As he grew older his size increased, and in course of time he came to be regarded as the heaviest man in the Kingdom. His great bulk doubtless caused him discomfort and inconvenience, nevertheless he, until recent years, enjoyed good health. Visitors to the inn mentioned the fact of his remarkable size to their friends, and he became in a way somewhat of a curiosity, which could not have been pleasant to one who was naturally of a retiring disposition.

Of late years his portrait has appeared in several London papers and, without much regard to his feelings, his weight, girth and height were published and comparisons made between him and other heavy men known in recent history. It is said that this notoriety caused him to receive offers to go on “show” but he shrank from anything of the kind. Now that death has claimed our townsman, it becomes a matter of history to record that he was beyond question, previous to his illness, the heaviest man in the United Kingdom, his weight being 46 stone, and his chest measurement 86 ins.

Owing to his bulk he did not look tall but he was 6 ft and ¾ inches. For thirteen years Mr. Longley had been confined to his house. The last time he visited London he had to travel in the guard’s van since it was found impossible to pass his huge bulk through the doorway of an ordinary carriage. Heavy as he was, Mr. Longley was 6 and ¾ stone below the weight of the bulkiest man of whom history has any record – Daniel LAMBERT.

Apart from being so well known, Mr. Longley will be very much missed by the poor in the neighbourhood of his house. Whenever he heard of anyone in distress he was always anxious to assist.

The funeral took place yesterday at St. Mary’s Cemetery, Copt Hill, where the grave was dug close by the Church (chapel.) It was a seven feet deep grave and was eight feet long by three feet three inches. The service was impressively conducted by the Rev. Prebendary A. L. Palmes, who came over from Saltwood to add his last tribute of respect to the memory of an esteemed former parishioner. The immense size of the deceased gave rise to rumour that it would be necessary to interfere with the structure of the Star Inn to get the coffin out, but Messrs. Flashman & Co. who undertook the funeral, found no need to do this, and the coffin, which was 7 ft long by 2 ft 9 in. high by 2ft 5ins., was slid through the window of the bar on to the hearse, which was drawn up close to the window for the purpose. At the graveyard the bearers numbered ten, and additional help had to be given in carrying the remains up the slope. The funeral was timed to leave the house at 2pm. There was a dense crowd round the Star Inn when the procession started, taking the route Castle Street, Maison Dieu Road, Park Avenue, Salisbury Road and Frith Road.

The procession was followed by hundreds of people, whilst thousands witnessed it en route. At the grave side there was probably between two and three thousand people present, and in all probability there was as much public attention given to the funeral as there was on the occasion of that of the late Sir Richard Dickeson, and in addition to the general public, there were many who mourned the deceased as a very good friend. There were many beautiful wreaths upon the coffin from his immediate relatives and friends, whilst behind the procession was a carriage filled with beautiful wreaths and floral devices from his wider circle of friends.

The chief mourners were:

In the 3rd carriage: Dr. Ormsby, Messrs. Emery and Carey.

Other carriages contained a large contingent of his fellow licensed victuallers and well-known Dover people.

Thomas Longley death, on 22 February, 1904, aged 56, with reference to cause of death as kidney disease.

Thomas Longley: Few have not heard of Dover’s heaviest man, Thomas Longley, who was at one time landlord of the Star Inn, in Church Street. This photograph has been lent to us by his son, Ernest, through his old St. Mary’s School chum, Mr. E. J. Parton, both of whom live in London. Mr. Longley died in 1904 aged 56. Recorded under the photograph are these particulars: Weight 597 lbs, height 6-ft and ¾ inches, chest 70 ins., waist 85 ins., calf of leg 26 ins, and “The Heaviest British Subject in the World”.

There was another article about him, featuring photo of a gold ring (of belt and buckle design) which had belonged to Thomas Longley. The ring, made by local watchmaker William Potter, of Military Road, had been brought into the Express office where it had been photographed.

While an interesting story from the time, the chances of being related are slim to nil. I like the reference to a “very old and respected Dover family”.

Thomas was not entirely exceptional in his dimensions. At a similar time, “Jolly Jumbo” of the Canterbury Arms, in Kilburn, was of similar proportions, though “only” attained a weight of 38 stone. 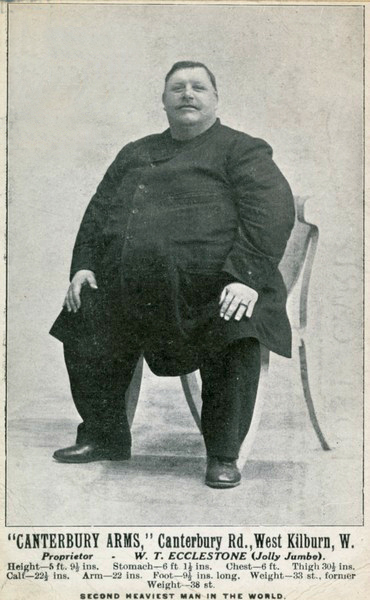