As we gradually left the lakes behind, and knowing that we were now significantly over half-way through the challenge, spirits started to rise and any lack of belief that we might have felt previously now dissipated.

The roads away from Scafell meant that progress was solid rather than speedy, and Tim was doing an excellent job of getting us to our final destination. There had been lots of discussion before the event of whether it was a “challenge” or a “24 hour challenge”. To me, it had never been anything other than a 24 hour challenge, and now if there had been any differences, they no longer existed. With kind traffic we’d have a fighting chance of completing within 24 hours. One decent hold-up or delay, and it would be game over. It was mostly out of our control. 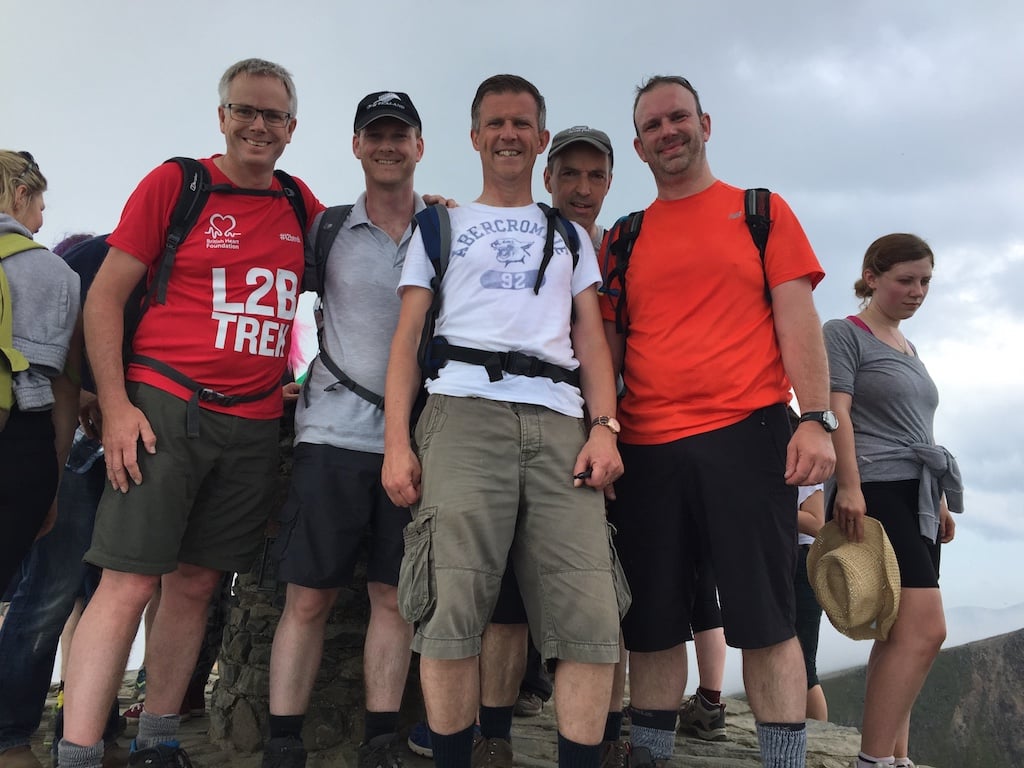 As we neared Llanberis and Snowdon, we all started doing the maths, beginning to realise that we could do this. We piled out of the vehicle in the Pen-y-pass car park, and strode off in the general direction of the the summit. We briefly discussed the Crib Goch route, and fortunately decided against it, opting instead for the Pyg Track.

The differences in walking styles and paces now couldn’t have been clearer, and the group became a fragmented string of tired and focussed individuals. We periodically re-grouped, yet as soon as we were a group, the people who’d arrived first almost immediately set-off. We all just wanted this done, but I wanted it done as a team.

We were kept company by hundreds, if not thousands, of people variously dressed in trainers, flip-flops, shorts, waterproofs and any other manner of attire. We saw many other charity groups along the way – this was peak season for challenges due to short nights.

We eventually summited Snowdon, threading our way through the vast hordes of people, and admiring the self-created and policed one-way system up down from the trig point! Summit photographs were more perfunctory than before as the clock was against us. On the way down, I marvelled as just how beautiful Snowdon and Snowdonia is. It’s quite comfortably one of my favourite places on earth, and copes with the tourism amazingly well, though the summit cafe is just an eye-sore.

If we’d been purposeful on the way down Ben Nevis, and lively descending Scafell Pike, we practically ran down Snowdon! The risk of tripping or turning an ankle was amazingly high given how tired we were, and when I caught up with the lead group, I knew I had to say something. “We’ve started together. We’ve summited together. We need to finish together”. Whether or not this was heard or heeded, we did then walk more closely, with the clock ticking remorselessly by. Those who have descended Snowdon via the Miners Track will know just how long it goes on for, even once you’re on the level section.

23 hours and 33 minutes after we’d started, we passed the gate at the entrance to the Pen-y-pass car park, and with emotional elation hugged and congratulated each other on a tough job well done.

With the event complete, my Epilogue post looks back at the adventure, and contemplation as to whether I’d do it again.